Peaky Blinders tailor turns Instagram sleuth to track down jobless skateboarder, 18, who did thousands of pounds of damage to family Bentley 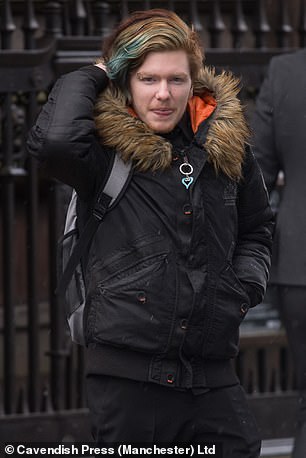 Jack Simmons (pictured outside Manchester Magistrates’ Court), 18, from Manchester was ordered to pay £500 compensation. Much less than the £9,175 Michael Pendlebury had requested. He was also ordered to complete 160 hours unpaid work as part of a 12 month community order

A celebrity tailor who used Instagram to track down a jobless skateboarder who trashed his family Bentley, has landed the teenager in court.

He had left the vehicle, which belonged to his late father, in a secure car park in Manchester city centre before it was trampled on and the rear screen cracked.

Not willing to let the culprit get away, Mr Pendlebury logged onto Instagram using the car park in Manchester city centre as a ‘location tag,’ and entered the search word ‘Bentley’.

He found incriminating selfies of jobless 18-year-old Jack Simmons shamelessly sat on top of the luxury vehicle – including clambering onto the bonnet of the Flying Spur while dressed in his converse trainers before standing on the roof.

Mr Pendlebury, who has also made suits for Coronation Street stars and Manchester footballers, handed the teenager a bill of almost £10,000 for the damage.

He also referred Simmons’ Instagram and Facebook accounts to police, who later visited the teenager after assessing the images – which have now been deleted.

But Mr Pendlebury never got the £9,175 he requested, which would have been used to ‘return the car to its condition when purchased.’ With the court contesting how much damage Simmons actually caused the the vehicle. 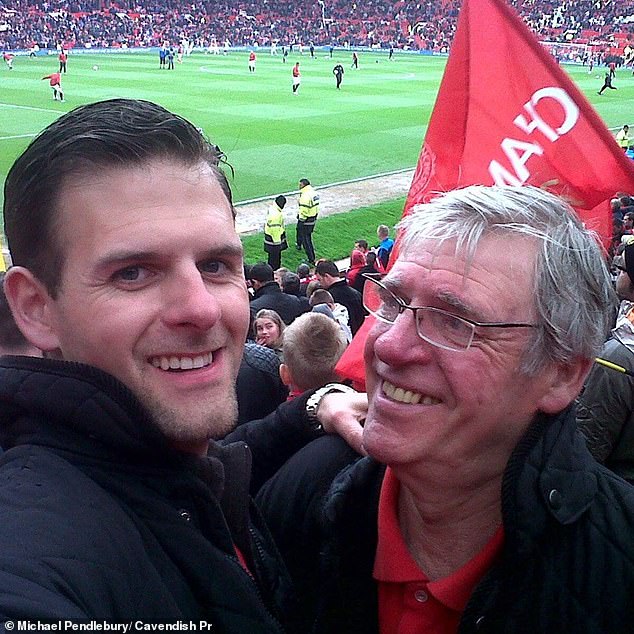 Michael Pendlebury (pictured with his late father James), who has made suits for the cast of BBC crime drama Peaky Blinders, used Instagram to track down the teenager who trashed his family Bentley 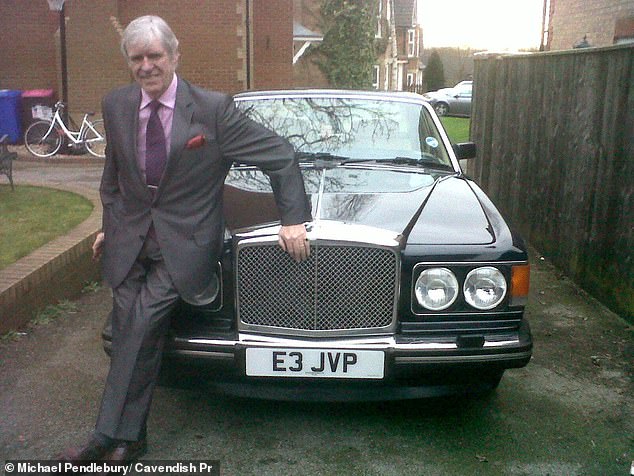 The Bentley, a Flying Spur (pictured), belonged to his late father James. Mr Pendlebury’s late father James clothed some of the city’s best known footballers, musicians and actors including George Best, Alex Ferguson and Noel Gallagher after setting up James Personal Tailor and Son in 1973

At Manchester Magistrates Court Simmons admitted criminal damage but was only ordered to pay £500 compensation. After magistrates said it would be ‘grossly unfair’ for the teenager to pay such a huge sum.

Simmons’ defence lawyers claimed the cost of the damage was closer to £2,000 – not £9,175 – and argued the case might not be disputed if it was a ‘lower value car’.

Describing the incident, which occurred after Mr Pendlebury – who runs his boutique tailor above a pub in Manchester city centre – had left the Bentley locked and secure in a nearby car park.

Mr Haseeb Yousaf prosecuting said: ‘When he returned at the end of the day, he noticed there was a large amount of shoe prints on the bonnet and roof of the vehicle. 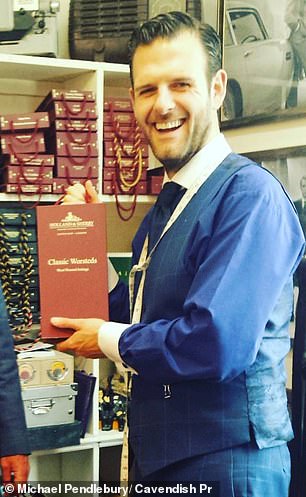 Mr Pendlebury, who has also made suits for Coronation Street stars and Manchester footballers, handed the teenager a bill of almost £10,000 for the damage. But he did not get this much back

‘He was of the belief that this was most likely the work of skateboarders who frequently use the car park.

‘The following day upon closer inspection, Mr Pendlebury noticed further damage consisting of deep scratches on the bonnet and roof of the car and a crack in the rear window.

‘Upon talking to his family, he came to the conclusion that the shoe marks were from a type of shoe used by the skating community – converse trainers.

‘He then went on the social media website Instagram and searched for Bentley using the car park as a location tag and found pictures which had been uploaded to the defendant’s profile and featured Mr Pendlebury’s car registration plate.

‘The pictures showed Mr Simmons posing on the car sitting on the bonnet and the roof. Mr Pendlebury took note of the details on the defendant’s profile which include that he is an 18-year-old skater from Manchester called Jack Simmons.’

Mr Yousaf then described how Mr Pendlebury managed to find Simmons on Facebook too – under he name of Jack James Andrew Simmons.

Outlining the how much money Mr Pendlebury was seeking, he said: ‘The indication from the victim is that repairs would be £2500 at the cheapest but the figure put before the court £9,175 is the cost which would return the car to its condition when purchased. The rear windscreen will cost £3000 due to damage.’ 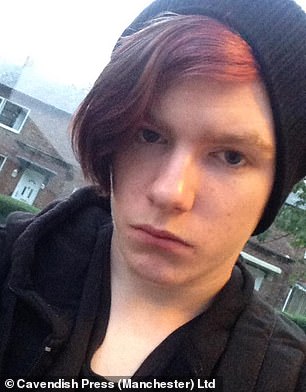 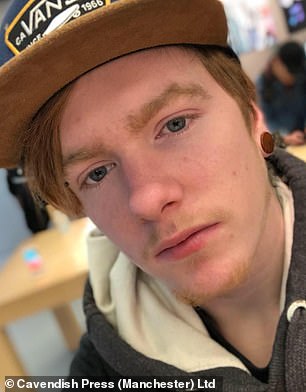 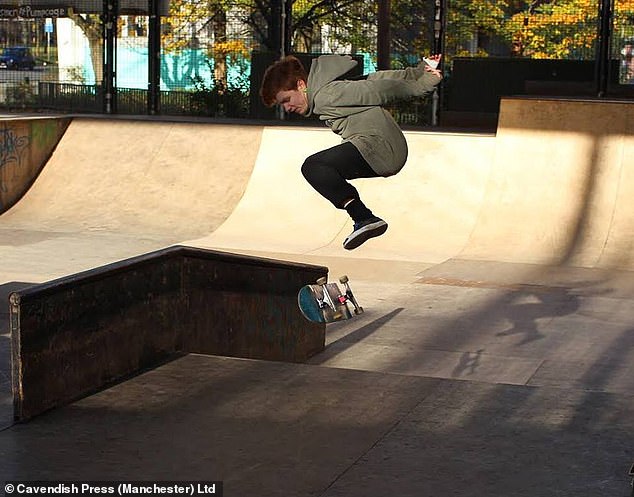 But in mitigation defence lawyer Patrick O’Hanlon said: ‘The difference between the valuation put forward by the victim and what the defendant says he could’ve caused is a world away from each other.

‘My client fully accepts that he was stupid in this action but the victim has produced no evidence from the garage where he got the damage valued.

‘He made a completely and utterly foolish decision getting photos with this car when he knew it was someone else’s vehicle.

How did Peaky Blinders tailor track down teenager who trashed his father’s car?

Michael Pendlebury, who runs his boutique tailor above a pub in Manchester city centre – had left the Bentley locked and secure in a nearby car park.

And so knowing the location of where the car was when the vandalism took place, he used this to search social media for anybody who may have taken pictures.

He logged onto Instagram using the car park in Manchester city centre as a ‘location tag,’ and entered the search word ‘Bentley’.

These included some of him clambering onto the bonnet of the Flying Spur while dressed in his converse trainers before standing on the roof.

‘The valuation in our plea is £2000 and this figure hasn’t been plucked from thin air.

‘Leave aside the notion of returning the vehicle to its factory condition – the value of damage which could have been incurred by the defendant is between £2000 to £3000 at the very most.’

The defence claimed that Simmons should not have to cover the costs of damage already on the car, and in the parts where he did not post for photographs.

Mr O’Hanlon continued: ‘The defendant doesn’t accept that he caused damage to the rear of the car.

‘Around £2000-£3000 would cover the damage to the roof and bonnet. Frankly what has been presented by Mr Pendlebury is hearsay – a regurgitation of what he was told at a repair shop.

‘It’s the issue of the full respray which takes the total cost to £9175 plus VAT.’

Outlining how much damage he thought Simmons had caused, Mr O’Hanlon said: ‘On a reckless basis, the defendant caused £3000 damage at most – including a total respray is not just.

‘The extent of the foolishness of his actions evidenced by the fact he put the pictures on social media for all to see.

‘He clearly recognises they were foolhardy actions. He does have an appreciation of the impact his actions had on the victim. If we were dealing with a low value car, would we be in this situation? I think not.’

Mr O’Hanlon added: ‘The defendant is a skateboarder and for the most part he is a sensible young man. Where he skates is in a skate park next to the car park where Mr Pendlebury parked his car.

‘The car park provides shelter when the rain comes on and this is what happened on the day in question. The defendant quite simply wanted to get a photo with the car. 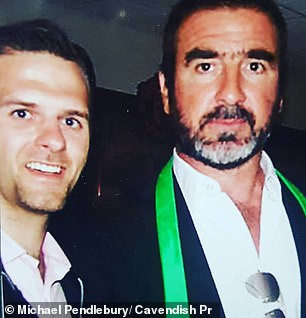 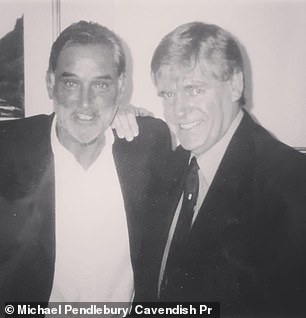 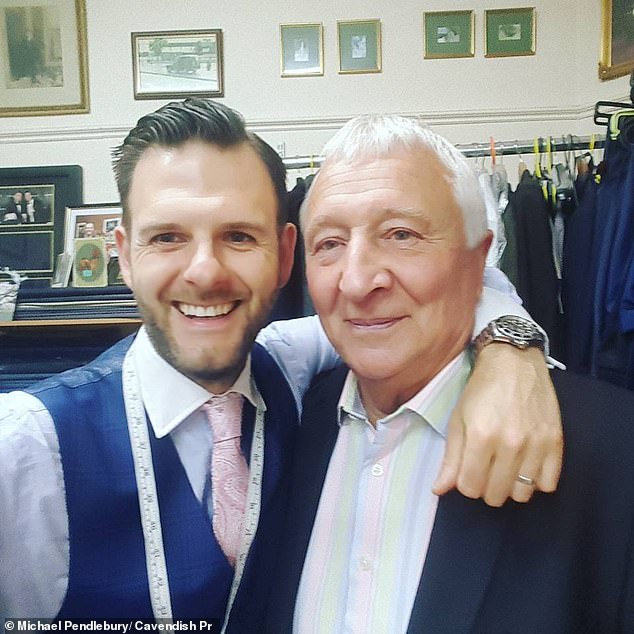 Mr Pendlebury is pictured with Mike Summerbee, a former Manchester City footballer, who played for the team in the late 1960s and early 1970s

A report by an unnamed probation officer said: ‘On the day in question, Mr Simmons was skating with friends at the skate park next to the car park where the incident took place.

‘The rain started and so Mr Simmons and his friends were chilling in the car park when they saw the car. He first got a picture on the bonnet of the car and then on the roof. He did so on his own and he was not pressured by any of his friends.

‘He admits it was his own stupidity. He did it without really thinking. He has a genuine understanding of how the victim would have felt.

‘He was not thinking of the consequences when he carried out the action. His family are upset with him that his actions have led to this but they are fully supportive.

‘He is on Universal Credit and regularly attends appointments at the job centre. He once volunteered at a skate camp and would like to do so in future. He did not think he would do damage to the vehicle when he carried out the actions.’ 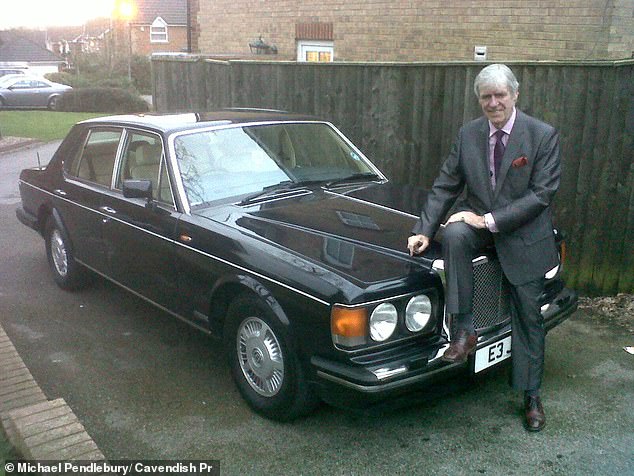 Simmons was not asked to pay back the full £9,175 for repairs to the car (pictured with Mr Pendlebury’s father James) but instead ordered to pay £500 compensation

Sentencing Simmons, Magistrate Alan Greenwood said: ‘This was as you quite clearly admit a very reckless act which caused substantial damage to a very expensive motor car.

‘We believe that adequate time has passed and that evidence could have been substantiated by the CPS in relation to repair costs.

‘We are going to accept the basis of the plea from the defence in its entirety. Quite clearly the CPS’s valuation of £9000+ is obviously grossly unfair on someone of your income.’

Simmons was also ordered to complete 160 hours unpaid work as part of a 12 month community order.