The Only Way is… with a BLUE BADGE! Pensioner blasts ‘arrogant’ Towie star Mario Falcone for parking £150,000 Lamborghini in disabled bay then on PAVEMENT after she confronted him

A TOWIE star has been branded ‘rude’ and ‘arrogant’ after he parked his bright green Lamborghini in a disabled bay.

Mario Falcone, 30, left the £150,000 supercar in the restricted space outside a shop in Brentwood town centre in Essex.

After the reality star was confronted by an angry pensioner he drove the Lamborghini Huracan further down the road and pulled up on the pavement.

Giovanna, who did not give her full name and is disabled, managed to take a photograph of the motor after she asked him to move. 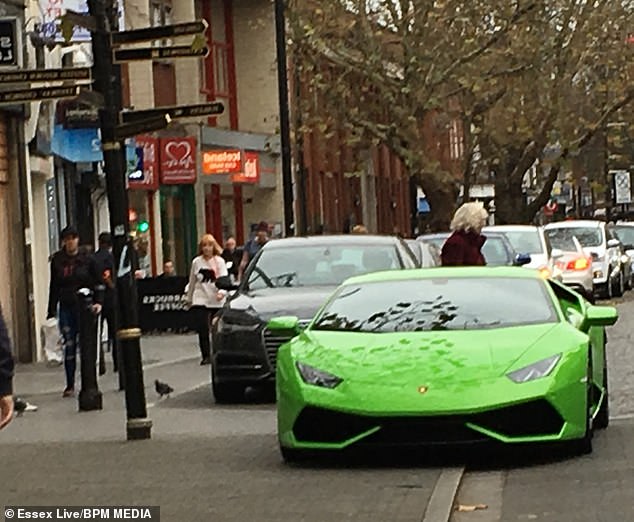 Mario Falcone left the £150,000 supercar in the restricted space outside a shop in Brentwood town centre in Essex

She spoke to Falcone – who first appeared on the ITVBe show in 2011 – when she realised the car wasn’t displaying a blue badge.

Giovanna, who was visiting the town centre for lunch said: ‘There were no spaces as we drove down, then I saw one with a green Lamborghini parked outside.

‘I don’t swear, but I was so angry that when I went into the shop I shouted ‘whose green piece of s**t is parked outside?’

‘This guy turned around and asked if he had a ticket.

‘I said no, but do you know where you have parked. He just said ‘there’. 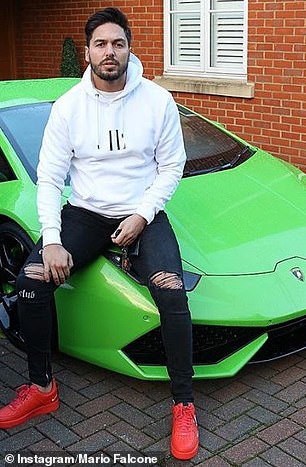 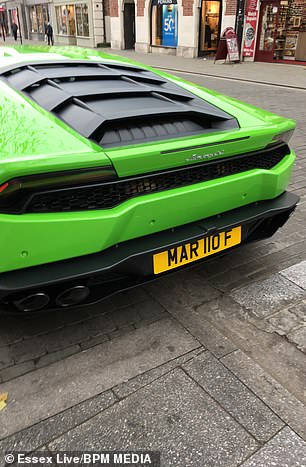 Falcone (left, with his car) was confronted by an angry pensioner, then  drove the Lamborghini further down the road and pulled up on the pavement (right)

‘I told him that was a disabled parking spot, and he said ‘I might be disabled’.

‘I asked him if he had a blue badge, he said no, so I asked him to move his car.

‘He was so arrogant, he didn’t care if he got a ticket, he was just so rude and so arrogant.

‘Luckily I don’t need a wheelchair and I can walk. I have a chronic pain condition and I have good days and bad days.’

After agreeing to move his car he drove it further down the street and parked it on the pavement. 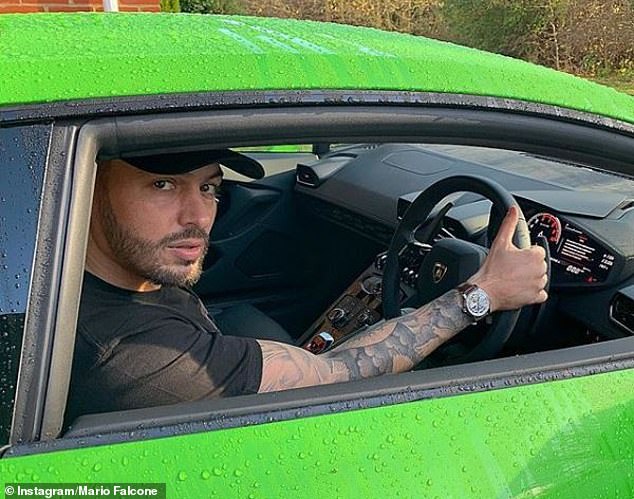 Falcone has posted a number of images on his Instagram showing him at the wheel of £150,000 Lamborghini

She added: ‘I took a photograph as I wanted to show he had parked on the pavement.’

She was contacted by her granddaughter who had recognised the car.

She told Giovanna that it belonged to Mario Falcone who was on TOWIE and sent her a picture of him, which Giovanna recognised as being the man she spoke to in the shop.

She added: ‘I think that the young people nowadays want to emulate their favourite celebrities. 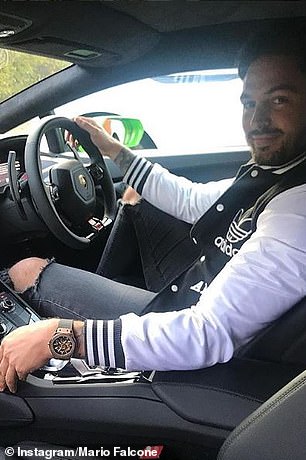 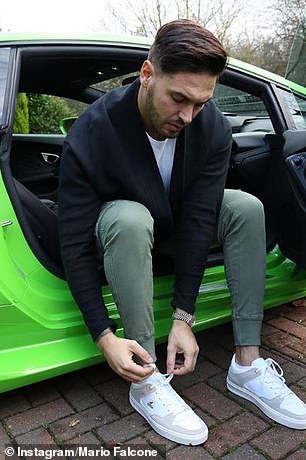 Falcone, pictured in his Lamborghni, was branded ‘rude’ and ‘arrogant’ by an angry pensioner who was looking to park in a disabled bay

‘The arrogance of him was unbelievable, he thought he was too big and that he could park anywhere.

‘If he had initially said ‘sorry love I will move’ that would have been fine.

‘The arrogance was infuriating.’

A spokesperson from the South Essex Parking Partnership said: ‘We can only issue a PCN if an Enforcement Officer is in the area and witnesses the contravention.

‘The parking Enforcement Officers can issue a PCN to vehicle that is parked half on the road and half on the pavement provided that the road has a parking restriction in place.

‘If there is no parking restrictions on the road the police can issue a Fixed Penalty Notice for obstruction of the highway.

‘The pavement would need to be fully obstructed for the police to consider action.’

The photographs, taken on Monday November 26 also showed Falcone’s car had no number plate on the front of the vehicle.

A spokesman for the DVLA said: ‘All cars registered from October 1, 1938 have to display a front and rear number plate.

A spokeswoman for the reality star declined to comment.