The world shuts its borders: From Spain to Singapore, thousands of people trying to flee coronavirus chaos are made to queue for miles as countries restrict entry

Traffic jams swelled along borders and some travelers appealed to their governments for help getting home Tuesday as countries in Europe and beyond imposed strict controls along their frontiers aimed at slowing the spread of the coronavirus.

Tens of millions around the world are already hunkered down in government-ordered isolation after many countries ordered stores, schools and businesses shut down to combat the pandemic.

The border closures stopped not only people but also much-needed goods. 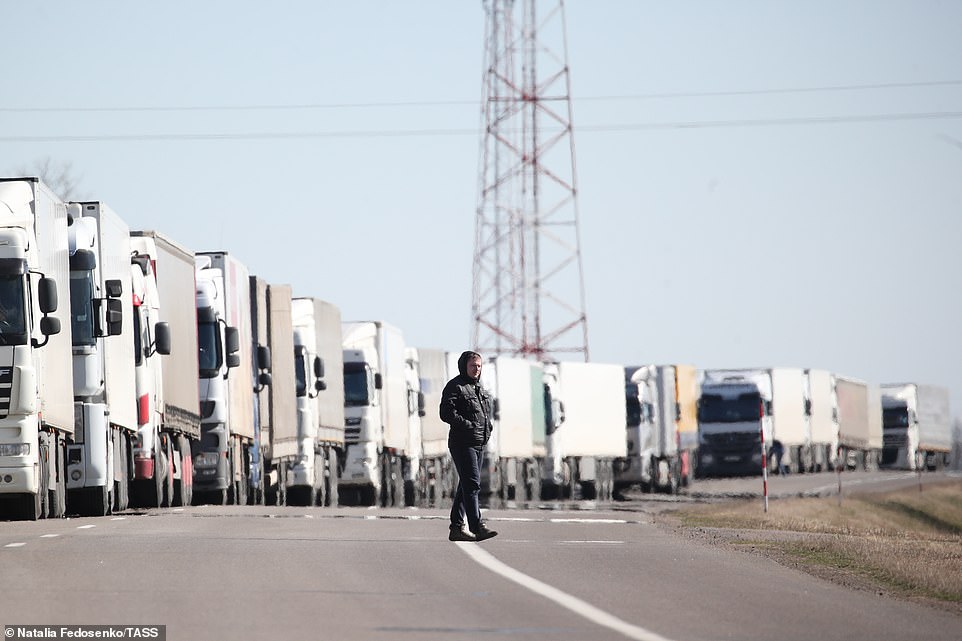 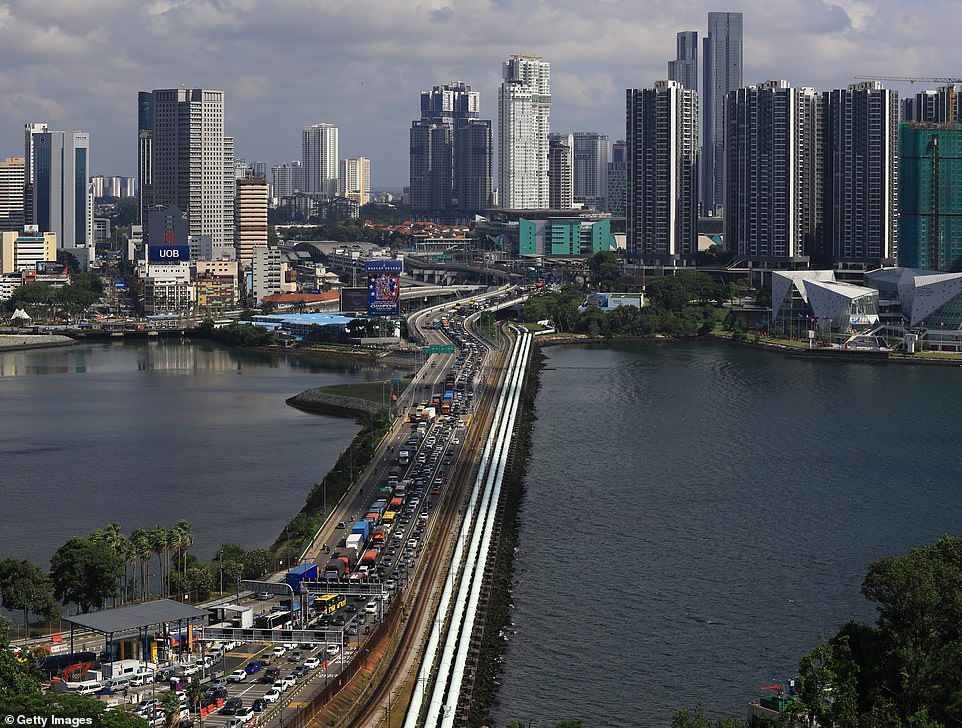 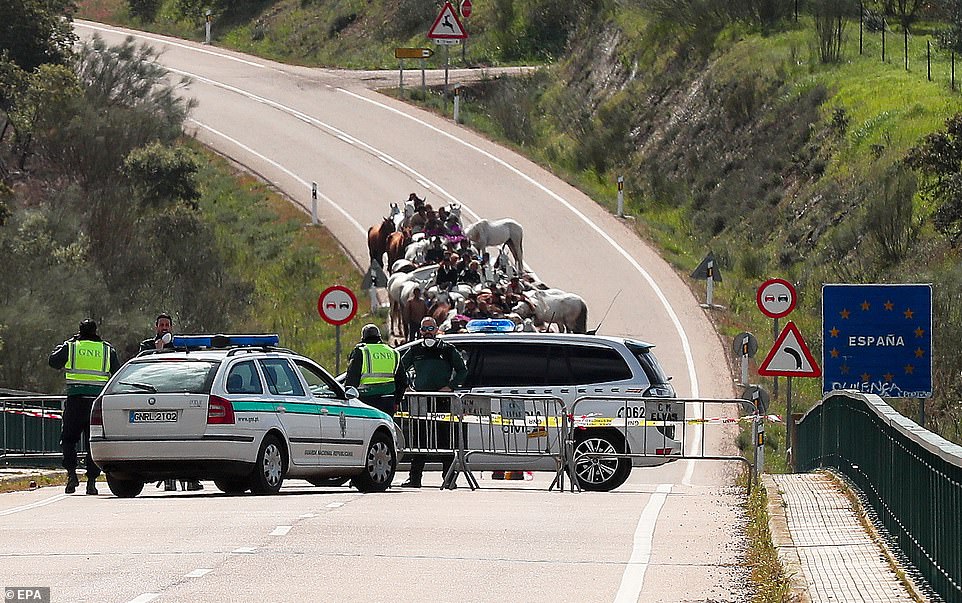 Several horses and wagons coming from Olivenza, Spain, are prevented from crossing the Ajuda Bridge to Portugal (Elvas) today by agents of National Republican Guard (GNR) and the Spanish Guardia Civil, in Elvas, Portugal

Lines of cars and trucks grew after Poland largely closed its border to foreigners. In Lithuania, trucks seeking to enter Poland backed up in a line 37 miles long, while similar traffic jams could be seen on the borders with Germany and the Czech Republic.

Lithuania was sending military airplanes and special trains to Germany to help hundreds of its citizens stranded at the crossing points with Poland.

‘We are all desperate cold and sleepless here for a third day. We just want to go home’ said Janina Stukiene, who was stuck on the border with husband and son. She said authorities were providing no food, accommodation or adequate sanitation.

To try to help citizens from Estonia and Lithuania get home following closure of the Polish border, German police organized a convoy of vehicles to a ferry port on one of its Baltic Sea islands.

Germany launched a £45.5million effort to bring home thousands stranded in popular winter vacation spots across the globe, including up to 5,000 in Morocco alone.

‘Even if we will do everything humanly possible, we cannot in every case provide a solution within 24 hours,’ Foreign Minister Heiko Maas warned.

Airlines have slashed flights due to a plunge in demand but also because many countries have been barring foreign arrivals. 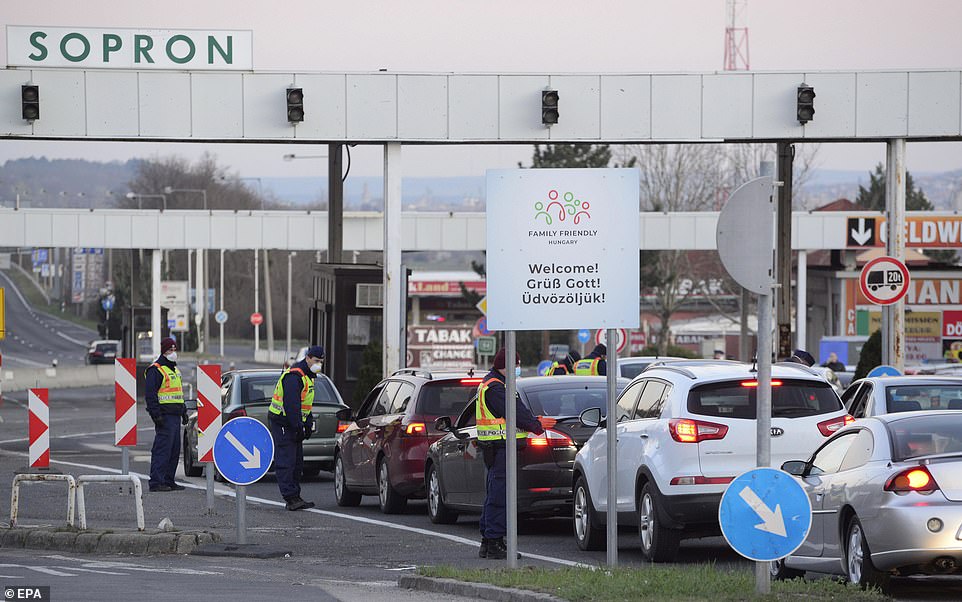 Cars line up at the Hungarian-Austrian border checkpoint in Hungary today. Both countries have closed their borders and will only allow their own citizens to enter. In Hungary the number of people infected with the Covid-19 virus has increased to 50, and one person has died 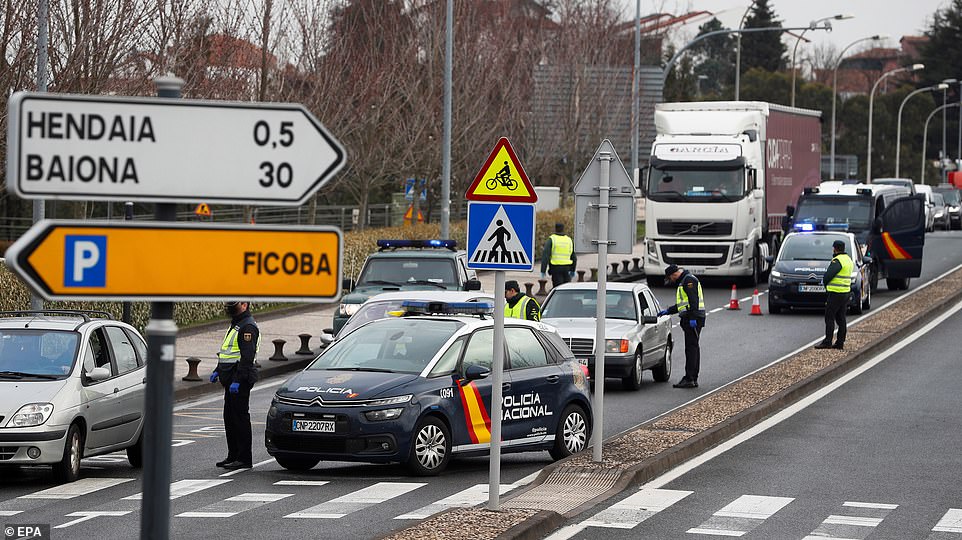 Members of the Spanish security forces stop a car from France at the border crossing between Spain and France, close to the town of Irun, Basque Country, northern Spain today 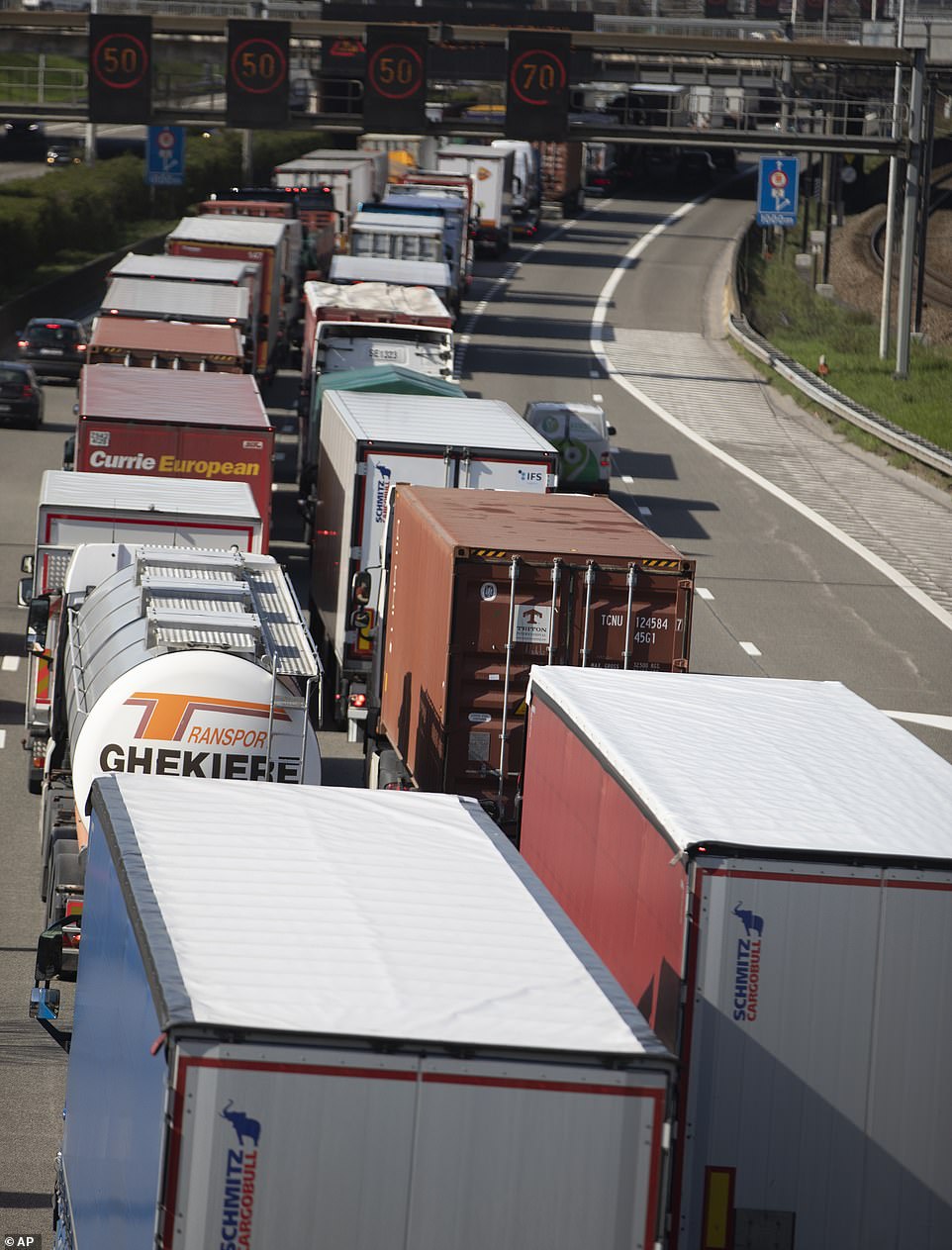 Trucks sit in a traffic jam near the Antwerp Port in Antwerp, Belgium today. Leaders across the EU are working on the task of trying to get goods, people and other supplies across borders that increasingly are closing amid the virus outbreak. For most people, the new coronavirus causes only mild or moderate symptoms, such as fever and cough. For some, especially older adults and people with existing health problems, it can cause more severe illness, including pneumonia

Regional authorities in Spain’s Balearic Islands effectively locked down the Mediterranean archipelago by restricting all but a handful of daily flights and incoming boats for returning island residents. Its president, Francisca Armengol, said on TV that the islands ‘will basically remain closed.’

Spain, now the fourth-most infected country, saw the number of people with the virus rise by more than 2,000 in one day to 11,178 and virus-related deaths jump by almost 200 to 491. Only China, Italy and Iran had more infections.

With the number of cases worldwide topping 185,000, a surge of patients in Madrid’s hospitals has fueled worries in Europe and elsewhere of what lies ahead. 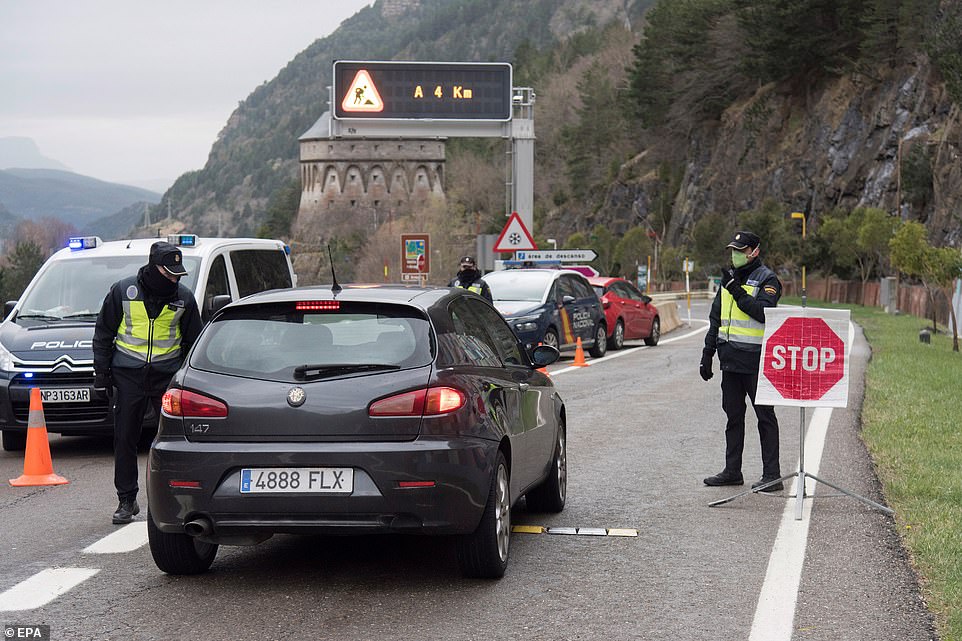 Several Spanish policemen control in the border crossing between Spain and France at Somport tunnel, close to the village of Canfranc, Huesca, northern Spain today. Spanish Home Minister Fernando Grande-Marlaska announced a day earlier the closure of the Spanish borders due to the outbreak of coronavirus. The Spanish authorities are said to be only allowing the access of goods and Spanish citizens 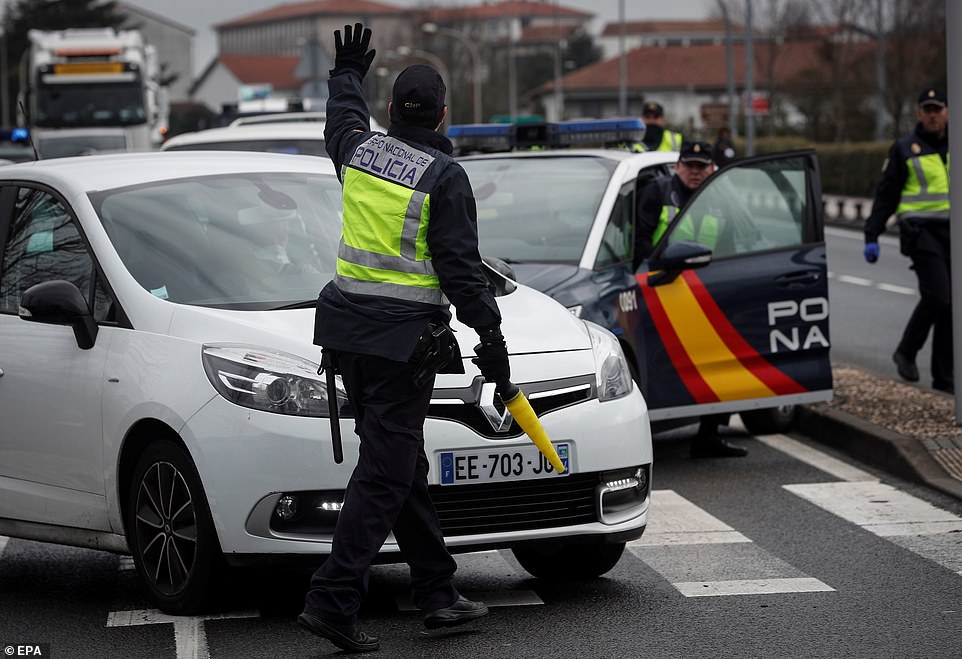 A driver from France is banned from entering Spain by a Spanish policeman (centre) at Behobia border crossing between Spain and France, in the town of Irun, Basque Country, northern Spain today 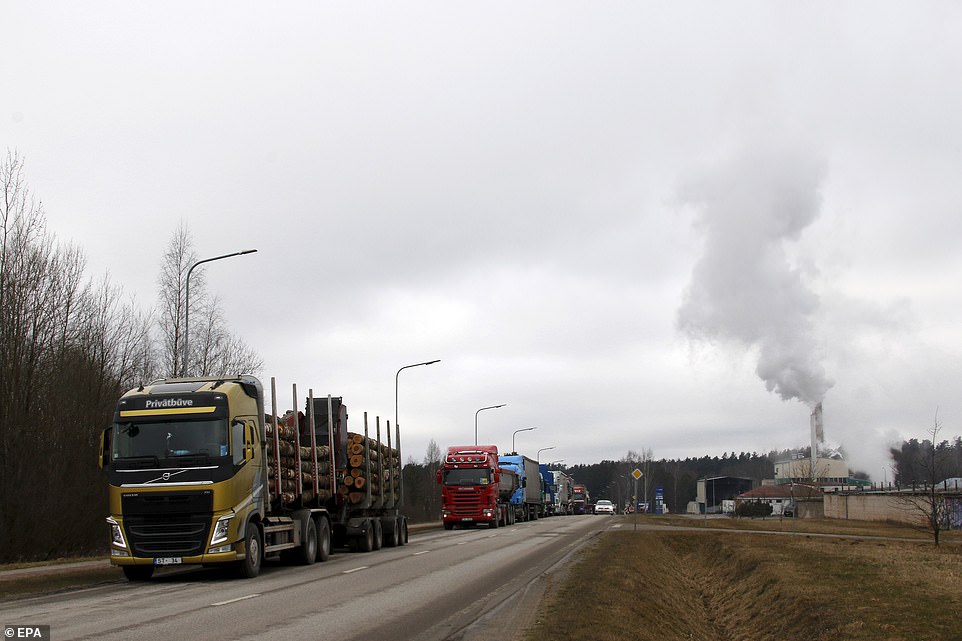 Trucks are waiting for border control at the Valga-Valka border crossing point, Latvia today. The Estonian government has declared an emergency situation due to coronavirus hits and, as of 17 March, closed its borders. There are a exceptions for the  international carriage of goods

The virus causes only mild or moderate symptoms, such as fever and cough, for most people, but severe illness is more likely in the elderly and people with existing health problems. COVID-19 has killed over 7,300 people so far but more than 80,000 have recovered.

Iran state TV warned that ‘millions’ could die in the Islamic Republic alone if the public keeps traveling and ignores health guidance. World Health Organization officials have said the number of cases there – nearly 15,000 with 853 deaths – have been sharply underreported.

In Italy, reported infection jumped to 27,980. With 2,158 deaths, Italy now accounts for well over a quarter of the global death toll.

Some bright spots emerged. Wuhan, the central Chinese city where the virus was first detected late last year and which has been under lockdown for weeks, reported just one new case Tuesday.

The economic toll from the crisis to both companies and individuals was only escalating. Shares reversed early losses in Asia on Tuesday after the U.S. stock market plunged to its worst day in more than three decades. Huge parts of many economies have come to a standstill as businesses and travel shut down.

‘It’s shocking, in a way. I’m still in the throes of processing it. It means I need to find a way to support myself from home,’ said Tyler Baldwin, a 29-year-old bartender in Seattle. 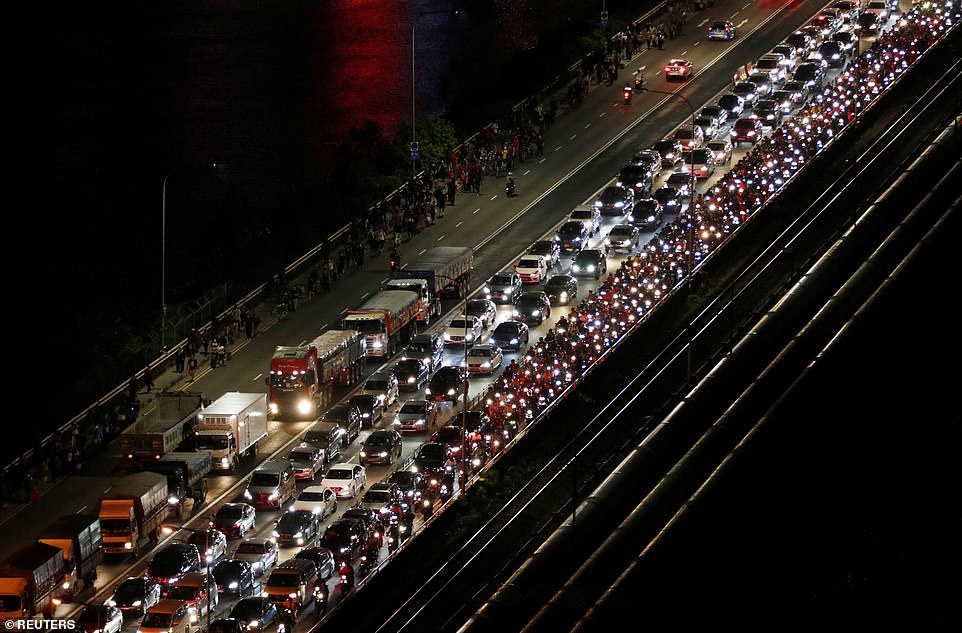 People walk across the Woodlands Causeway with their luggage, from Johor to Singapore, hours before Malaysia imposes a lockdown on travel due to the coronavirus outbreak in the early hours of this morning 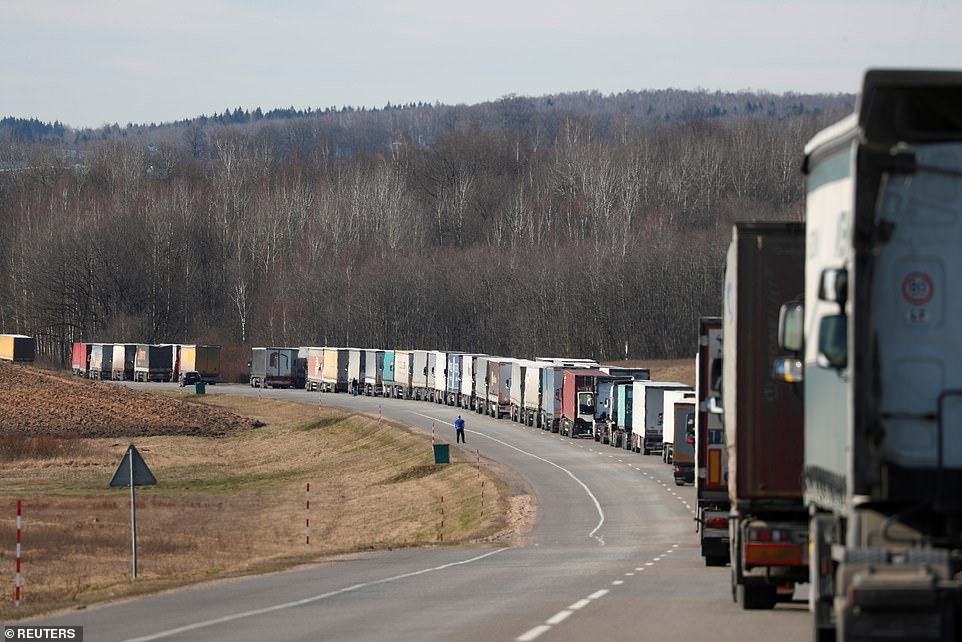 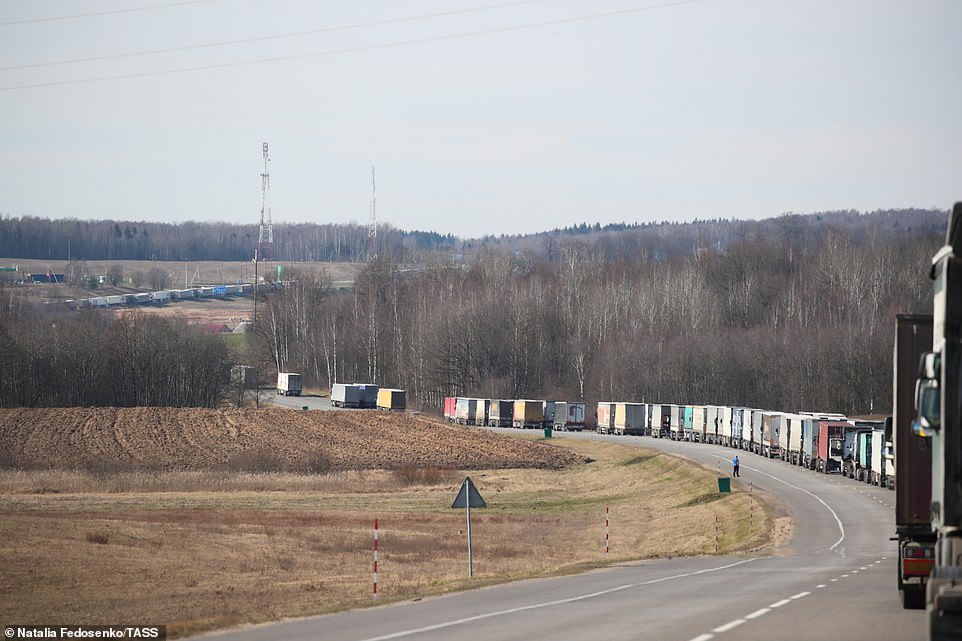 ‘In a similar way to how the Sept. 11 attacks completely changed people’s perception about security, quarantine authorities like us believe the daily lives of all the people around the world will be changed because of COVID-19,’ Kwon said. ‘From now on, if you are sick, you should voluntarily rest to prevent a spread to others.’

Malaysia banned foreign travel and is allowing only essential services to stay open. France allowed people to leave home only to buy food, go to work, or do essential tasks. French President Emmanuel Macron said the restrictions were tightened because people hadn’t complied with earlier guidelines and ‘we are at war.’

The first confirmed cases of COVID-19 were reported in Somalia, which has one of Africa’s weakest health systems.

Jack Ma, founder of the Chinese tech giant Alibaba, said his foundation will donate more than 1 million testing kits – that’s 20,000 testing kits to each of Africa’s 54 countries – as the coronavirus starts to spread on the continent.

Thirty African countries have confirmed cases but about a dozen lack testing capability.

‘We cannot … assume this continent of 1.3 billion people will blissfully escape the crisis,’ Ma said. 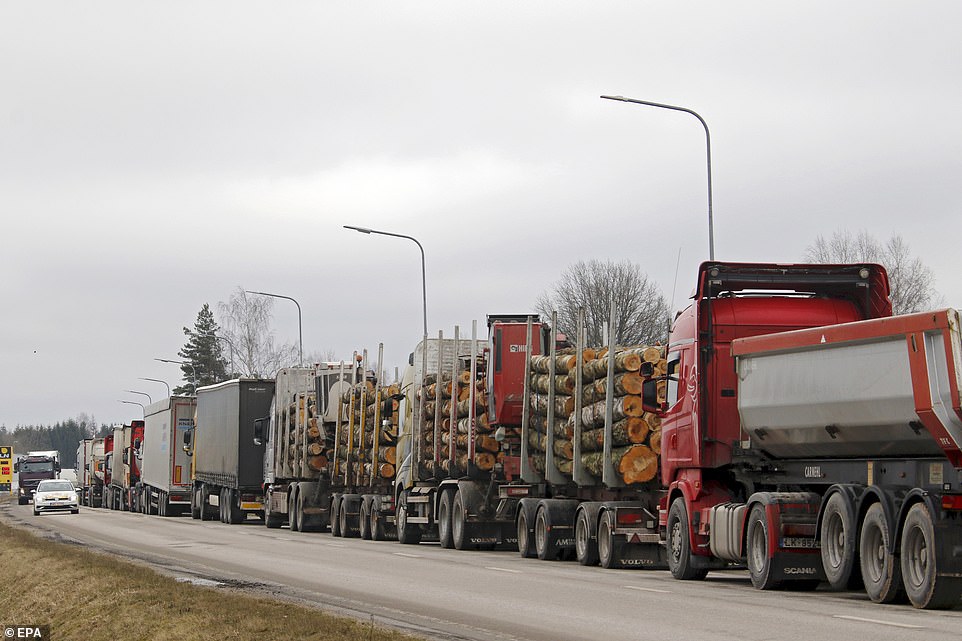 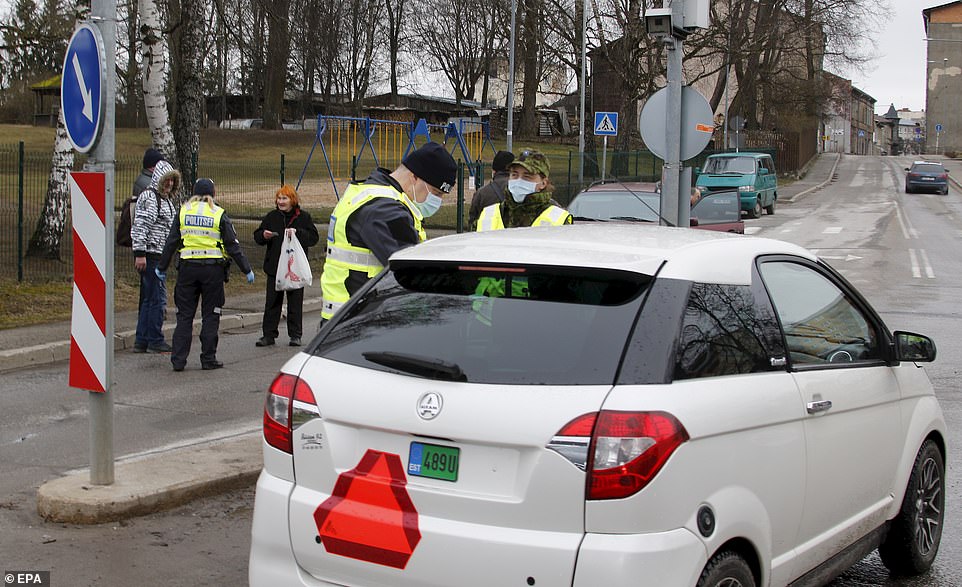 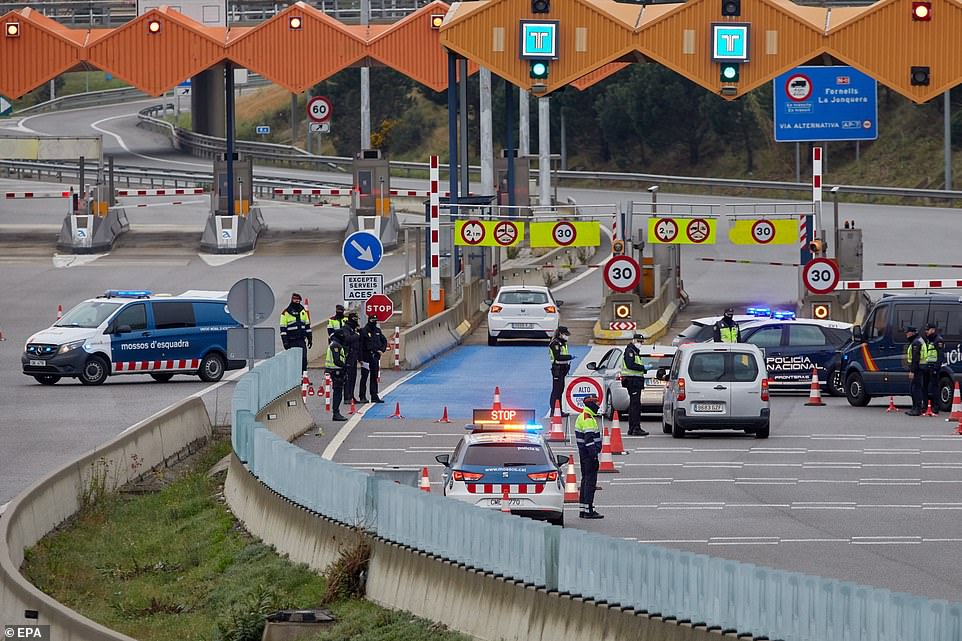 Spanish National Police agents are seen on the Spanish side, at the border between France and Spain in La Jonquera, Catalonia, Spain today. Spain faces its third day of the ‘state of alert’, declared by Spanish central government, with the closure of borders amid the outbreak of coronavirus 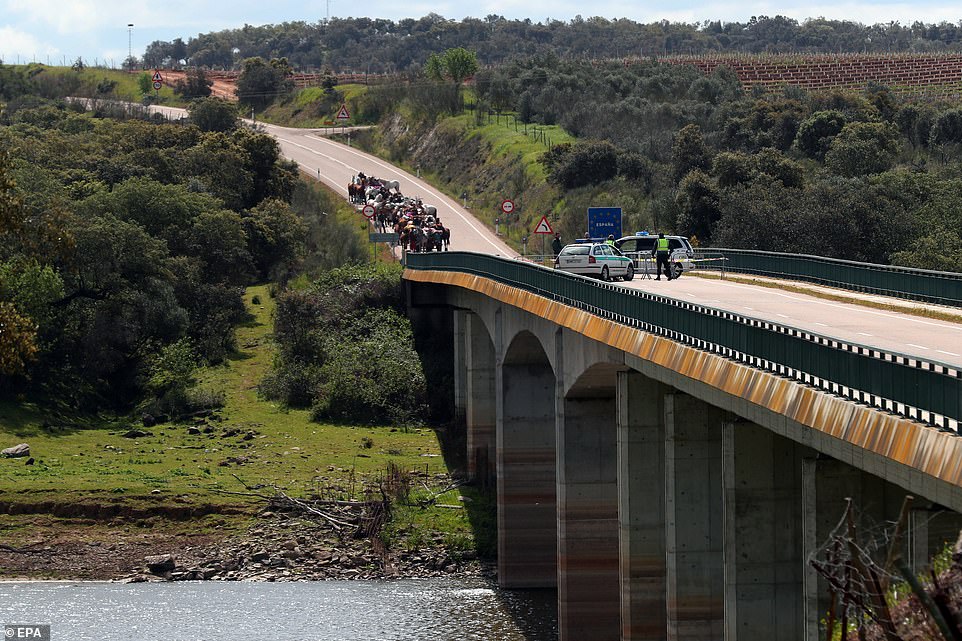 Several horses and wagons coming from Olivenza, Spain, prevented from crossing the Ajuda Bridge to Portugal (Elvas) by agents of National Republican Guard (GNR) and the Spanish Guardia Civil, in Elvas, Portugal today. The control of the land borders between Portugal and Spain started from 11pm last night, and at the same time the air, rail and river connections between the two countries were also suspended

As the pandemic expanded in Europe, the Mideast and the Americas, China and South Korea were trying to hold their hard-fought gains. China is quarantining new arrivals, who in recent days have accounted for an increasing number of cases, and South Korea will increase screenings of all overseas arrivals starting Thursday.

Infections have continued to slow in South Korea’s worst-hit city of Daegu. But there’s concern over a steady rise of infections around Seoul, where new clusters have emerged.

In the U.S., officials urged older Americans and those with chronic health conditions to stay home, and recommended all group gatherings be capped at 10 people. Americans returning from abroad encountered chaotic airport health screenings that clearly broke all virus-fighting rules against crowds

Some countries that had resisted more stringent measures snapped into action, too.

British Prime Minister Boris Johnson told people to eliminate unnecessary contact with others, working from home where possible and avoiding bars, restaurants, theaters and other venues. Schools remained opened for the time being.

Some scientists, and many worried Britons, have said the government should have taken tough action sooner.

Britain’s dramatic escalation of social restrictions to fight the virus was sparked by new scientific evidence suggesting that 250,000 people in the U.K. and more than one million in the U.S. might die if the country did not suppress its spread. 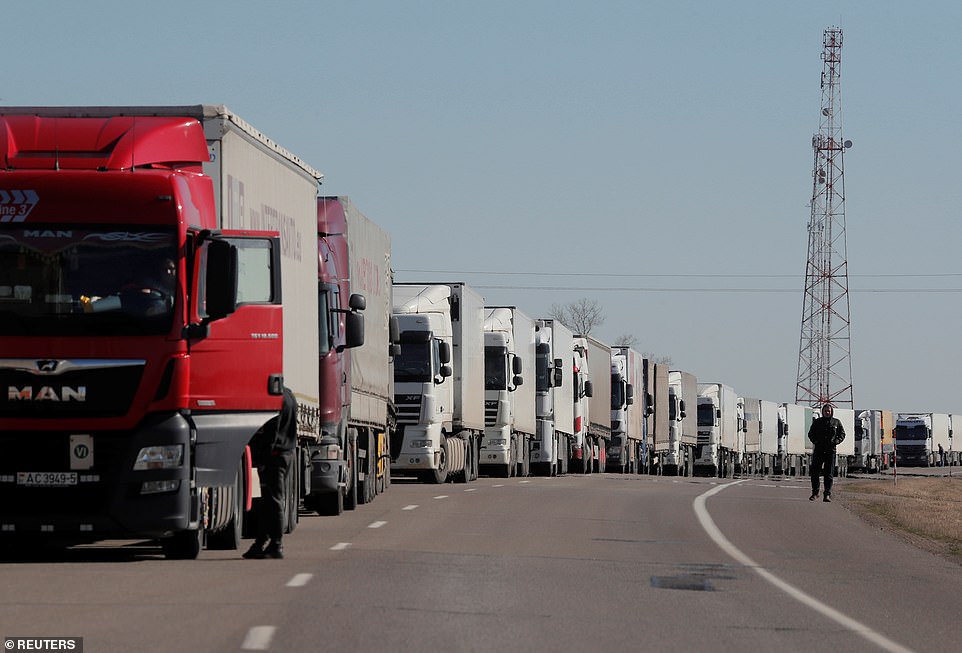 The analysis, published by Imperial College London epidemiologists, drew on the latest data from China and Italy. It found that a strategy of ‘mitigation’ – slowing but not stopping the spread of the virus while protecting vulnerable groups like the elderly – would still lead to a huge number of cases that would overwhelm the health care system.

The researchers estimated as many as half of all cases were not identified and that 30 per cent of hospitalized patients would require critical care. They also suggested almost 81 per cent of the population in the U.S. and U.K. might be infected during the pandemic and said the drastic social restrictions might need to be in place for many months, until a vaccine is available that could help avoid a rebound in the virus’ spread.

Michael Head, a global health expert at the University of Southampton who was not linked to the research, said the modelling estimates were credible and showed that Britain’s aim now is simply ‘lessening the impact of what will be a very bad outbreak.’