This is the shocking moment cabin crew had to stop a group of ‘drunk’ women fighting on a flight as one of the passengers branded her opponent a ‘terrorist’ during a foul mouthed rant.

The clip was filmed on Tuesday and shows the moment three women started arguing on board after two were allegedly drinking and speaking loudly, one passenger on the flight claimed.

Cabin crew on the flight from Atlanta to Los Angeles tried to calm the situation down, with the male flight attendant having to raise his voice to try and get through to the women.

A female member of cabin crew also tried to get the women to sit back in their seats. They can be heard saying ‘she started it’, before one of the passengers accuses another female of being a ‘terrorist’. 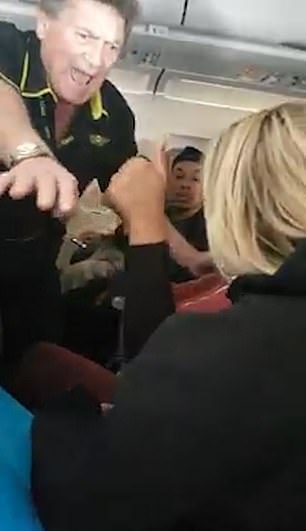 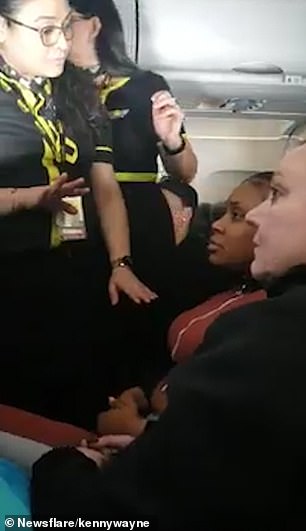 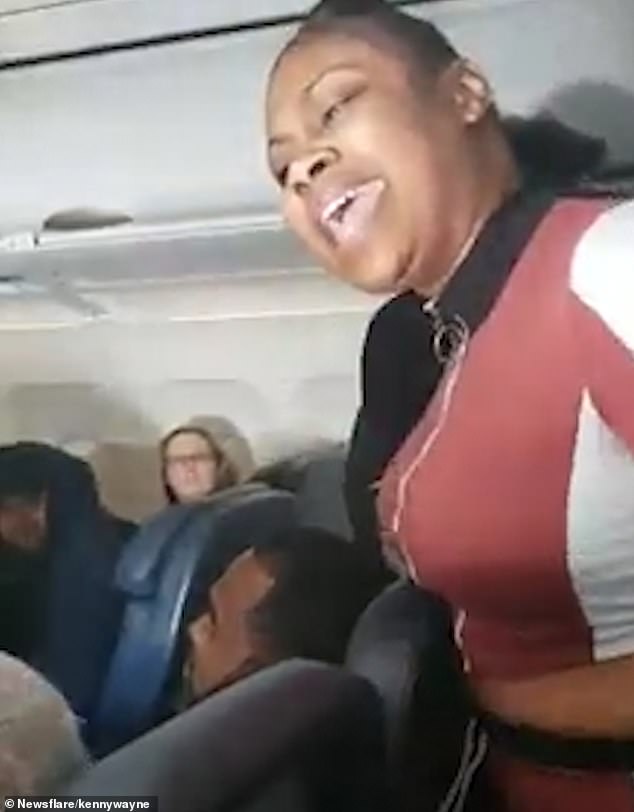 One fellow passenger said: ‘The two ladies were drunk and were talking so loudly and cursing. The lady across from me asked them to be quiet because of the kids on the plane and that’s when the fight started.

‘In the end, the airline let them go without pressing charges or anything.’

As the video starts the woman in the row of seats in front of the person filming can be heard telling the other woman to ‘say that s**** when you get off the plane’.

The male flight attendant then says that ‘that’s enough girls’. He tried to calm the women behind down who keep saying that the other woman had been ‘doing it the whole time’.

One woman, wearing a red jacket continuously calls the woman in front of her a ‘b****’, and raises her voice at the flight attendant.

She then gets out of her seat and says: ‘I’m trying to go to sleep and this b**** keeps trying to talk to me.

The male flight attendant tells her to calm down. Then the blonde woman claims that the attendant has let the woman ‘harass them the whole entire flight’.

The woman in the red jacket then starts shouting again, claiming she is ‘from Detroit and knows how to fight’.

It’s at this point that the female flight attendant comes over to see if she can help.

The blonde woman claims that the woman in front of them started the argument.

The woman they are arguing over, who is wearing a green head dress, then walks through the aisle and the blonde woman repeatedly calls her a terrorist and even shouts it down the aisle as she walks past.