Marape has been in power for just 18 months after replacing long-serving leader Peter O'Neill in a similar process that involved prominent government ministers switching sides. 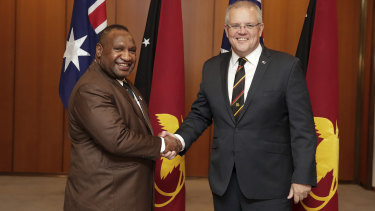 Deputy Prime Minister Sam Basil was among those who withdrew support for the government on Friday, as opponents used their numbers to suspend Parliament and start preparations for a vote of no confidence in the first week of December that could see Marape ousted.

"We understand the cries of the people and of course we are doing the right thing today," Basil told media, adding that he believed the country had gone backwards under Marape's leadership.

"It's not over until it's over, leadership has its moments," he said.

Marape has used his leadership to put some of the world’s biggest resource companies on notice over a perceived lack of wealth flowing from their projects back to communities.

He has pledged to turn the resource-rich South Pacific archipelago into the "richest black Christian nation" on earth and has battled to secure a bigger take for the country from major resource projects, leading to delays in the development of gas fields by Exxon Mobil Corp and Total.

The government has also refused to renew a licence for Barrick Gold to operate the Porgera mine while the government demands a larger stake.

The stand-offs have come as PNG struggles under dire levels of debt built up over many years, made worse by the novel coronavirus pandemic, and as China and the United States compete for influence.

The government has blamed extravagant spending by the previous administration and poorly negotiated terms for resource projects for its poor finances.

The opposition's challenge was timed to block the passage of the government's budget while also triggering the mechanism for changing a leader.

MP Charles Abel, a former deputy prime minister and treasurer, said there were numerous worries about the way the government was handling the economy.

"There is deep concern about the way the economy is being managed, the escalating debt, erosion of the independence of the central bank, stalled projects, loss of jobs, anti-investment rhetoric, lack of consultation, unconstitutional laws bypassing landowners and provincial governments," he told Reuters.

Australian Prime Minister Scott Morrison was due to meet Marape in PNG next week.