Mateusz Morawiecki stands by previous statements as he rejects criticism of his country’s new Holocaust law. 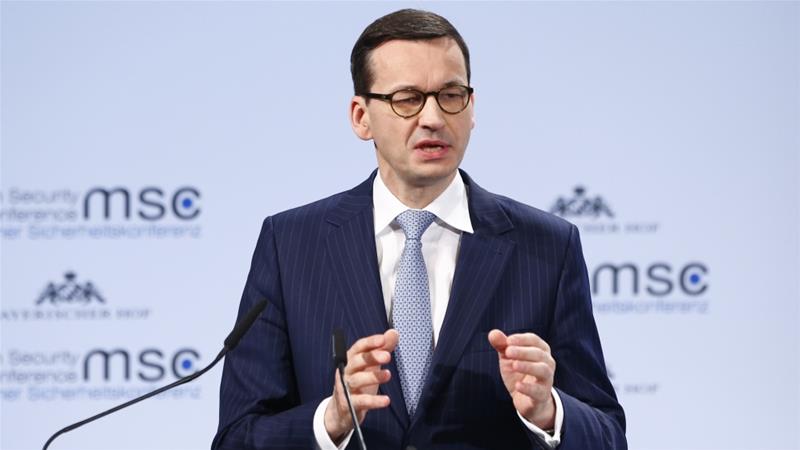 Mateusz Morawiecki, Poland’s prime minister, has stunned attendees at the Munich Security Conference when he stood by statements made earlier defending his country’s new Holocaust law.

Morawiecki rejected criticism on Saturday of the new law as he answered an Israeli journalist’s question over whether the new legislation amounted to the criminalisation of discussion of Polish complicity in the crimes committed during the second world war.

Morawiecki said hat it was inaccurate to conflate victim and perpetrator and that such mischaracterisation was an “offense” to both Jews and Poles who “suffered greatly during the second world war”.

Proponents of the law claim that it is aimed at countering erroneous finger pointing for crimes committed by Nazis during the German occupation of Poland.

Polish President Andrzej Duda defended the bill earlier in February claiming that it was much needed to defend the reputation of the country.

“Taking the need to protect Poland’s and the Polish people’s good name into account … I made the decision to sign this amendment to the bill into law”, Duda was quoted saying by Russia’s Tass news agency.

In a vote cast last month, the Polish senate approved of the law overwhelmingly with 57 voting in favour, 23 against and two abstaining.

The law imposes fines and prescribes a maximum three-year sentence to anyone found guilty of ascribing “responsibility or co-responsibility to the Polish nation or state for crimes committed by the German Third Reich”.

Polish embassies, Morawiecki said, were requested on 260 instances to respond to statements about Polish death camps, a term that he says should be taken with a grain of salt.

Asked for her thoughts on whether the new law violates the right to free speech, German Chancellor Angela Merkel stopped short at taking responsibility for her own country’s actions, remarking that “Germans are responsible for what happened during the Holocaust, the Shoah, under National Socialism”.