A police officer in the Philippines was killed by a rooster’s blade while raiding a cockfight, an official reported Tuesday, according to a report.

The rooster’s gaff, a sharp blade fixed to its leg for fighting, somehow cut through the officer’s femoral artery on his thigh, BBC News reported.

The officer, identified as Lieutenant Christine Bolok, was pronounced dead at the hospital.

Cockfighting is a popular sport in the Philippines, but it has been made temporarily illegal in an effort to contain the coronavirus. 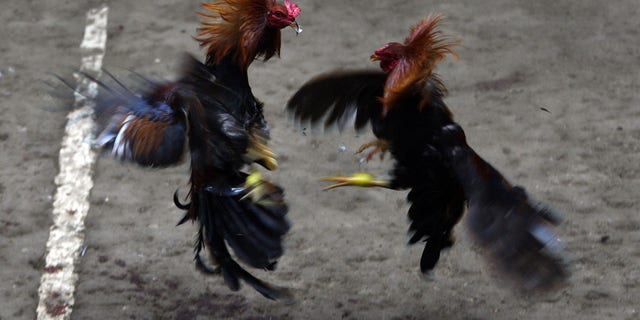 Three were arrested in connection with the cockfight and police are looking for three others. Seven roosters were confiscated in the raid, according to the BBC.

Under normal circumstances, the sport, which is illegal in the United States because it’s considered animal cruelty, is allowed on Sundays and holidays in licensed cockpits in the Philippines.

"I could not believe it when it was first reported to me,” Provincial police chief Colonel Arnel Apud told Agence France-Presse. "This is the first time in my 25 years as a policeman that I lost a man due to a fighting cock's spur."

"It was an unfortunate accident and a piece of bad luck that I cannot explain," he added.

Bolok had picked up the bird while gathering evidence at the scene, according to AFP.