Alarm bells are ringing for Boris Johnson today after a poll showed Keir Starmer overtaking him as the public’s preferred PM.

YouGov research found the Labour leader has pulled ahead of Mr Johnson on the key measure for the first time.

The shift came amid a mounting backlash at the handling of the coronavirus crisis, with criticism of the contact tracing system and mixed messaging over lockdowns.

When voters were asked to name their favoured PM, 32 per cent said Mr Johnson – down one point on the previous week.

But 34 per cent went for Sir Keir, after his ratings spiked by three points, according to the survey for The Times. 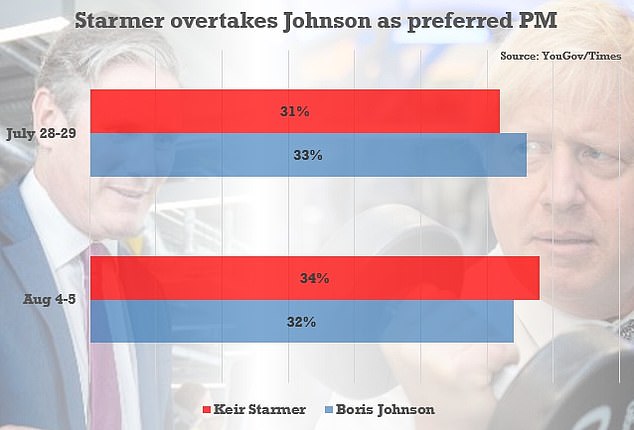 It was the first time a Labour leader has led on the preferred PM measure in a YouGov poll since the aftermath of the snap election in 2017. Jeremy Corbyn failed to build on his advantage after that single poll.

The boost comes after Sir Keir was seen as making a strong start to his time in charge of Labour.

But the findings will also raise concerns in Downing Street over the impact of the coronavirus crisis on Mr Johnson’s standing.

Just eight months after winning a stunning majority at the general election, most premiers would expect to be basking in a honeymoon period.

However, the pandemic has had a dramatic impact on the country, putting the government under massive pressure.

Separately, research from University College London has found that confidence in the government tumbled after it was revealed maverick No10 adviser Dominic Cummings had driven from London to County Durham with his self-isolating family during the toughest phase of lockdown.

Despite the personal poll setback for Mr Johnson, YouGov found the Tories still maintaining their overall lead on voting intention.

Some 42 per cent said they backed the party, compared to 36 per cent who supported Labour. 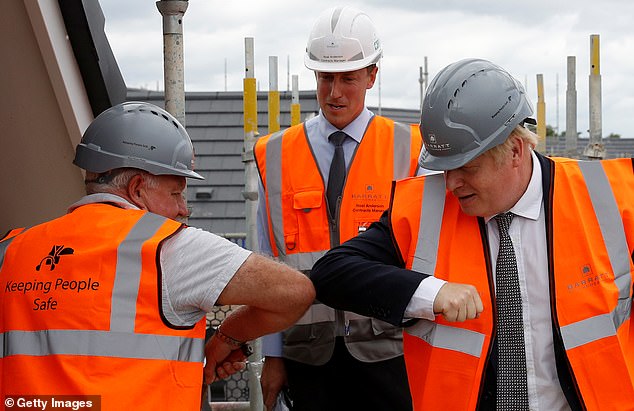 Mr Johnson, pictured right on a visit to Warrington yesterday, has been facing criticism over his handling of the coronavirus crisis