Rome: Pope Francis is giving the Vatican Secretariat of State three months to transfer all of its financial holdings to another Vatican office following its bungled management of hundreds of millions of euros in donations and investments that are now the subject of a corruption investigation.

Francis summoned the Secretary of State, Cardinal Pietro Parolin, his deputy as well as the Vatican’s top finance officials for a meeting on Wednesday and gave them a three-month deadline to complete the transfer, Vatican spokesman Matteo Bruni said on Friday (AEDT). 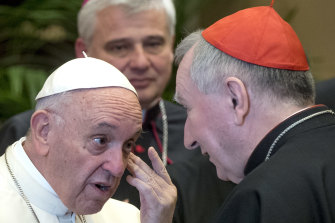 Pope Francis, left, summoned the Vatican Secretary of State, Cardinal Pietro Parolin, right, and his team to a meeting on Wednesday. He’s now shaken up the way the Holy See’s finances are handled.Credit:ANSA/AP

The Vatican released the letter that Francis wrote to Parolin on August 25 in which he announced he was stripping the secretariat of its ability to independently manage the money.

Francis cited the "reputational risks" incurred by the department's investments in a London real estate venture and other speculative operations that have lost the Holy See tens of millions of euros, some of it money from the Peter's Pence donations from the faithful.

Francis’ decision was an embarrassing blow to the secretariat's standing as the most powerful Holy See office, reducing it to essentially any other department that must propose a budget and have it approved and monitored by others.

Its financial holdings are now to be held by the Vatican's Treasury Office, known as APSA and incorporated into the Holy See's consolidated budget, Francis wrote. The Economy Ministry will oversee spending. 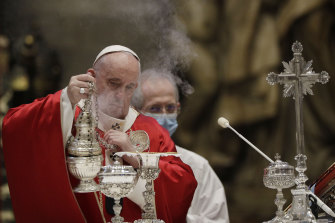 Pope Francis celebrates a mass for deceased prelates in St Peter’s Basilica, at the Vatican.Credit:AP

The outcome is essentially that which was sought years ago by Cardinal George Pell, Francis’ treasurer and first economy minister who clashed with the Secretariat of State over his financial reforms and efforts to wrest control of the department's off-the-books funds. Pell famously boasted in 2014 that he had “discovered” hundreds of millions of euros that were “tucked away in particular sectional accounts and did not appear on the balance sheet" — a reference to the secretariat's in-house asset portfolio.

Pell had to abandon those reform efforts in 2017 to face trial for sexual abuse in Australia, but he was acquitted and returned triumphantly last month to Rome, where he was granted a well-publicised audience with Francis.

Francis moved against his own secretariat of state amid a year-long investigation by Vatican prosecutors into the office's €350-million ($487-million) investment into a luxury residential building in London's Chelsea neighbourhood.

In September, he fired Cardinal Angelo Becciu, who was number two at the Secretariat when it purchased the building. Becciu has denied any wrongdoing after the pope alleged embezzlement and nepotism.

Prosecutors have accused several officials in the department of abusing their authority for their involvement in the deal, as well several Italian middlemen of allegedly fleecing the Vatican of tens of millions of euros in fees.

The scandal has exposed the incompetence of the Vatican's monsignors in managing money, since they signed away voting shares in the deal and agreed to pay exorbitant fees needlessly to Italians who were known in business circles for their shady dealings.

The pope received a mandate from cardinals who elected him in 2013 to clean up Vatican finances after a string of scandals during the pontificates of his two immediate predecessors, pope Benedict and pope John Paul II.

Last June he approved new rules for procurement and spending in the Vatican meant to cut costs, ensure transparent competition and reduce the risk of corruption in awarding contracts.

He said in an interview with an Italian news agency last month that he was determined to root out corruption in the Catholic Church but he was not overly optimistic because it was a centuries-old human problem.

Just this week, a judge in Italy authorised financial police searches at the homes of one of the Vatican monsignors and two Italian businessmen implicated in the deal, as well as some of their relatives and three related businesses, according to a warrant seen by The Associated Press.

In his letter to Parolin announcing his decision, Francis cited the London venture as well as the secretariat’s investment in a Malta-based investment vehicle, Centurion Global Fund, headed by the Vatican’s long-time external money manager.

According to Italian daily Corriere della Sera, Centurion invested in such ventures as the Rocketman film on Elton John as well as a holding company headed by Lapo Elkann, one of the more flamboyant members of Italy’s Agnelli clan.