Minneapolis: State prosecutors have rejected an argument by a fired Minneapolis police officer charged in George Floyd’s death that he was just a rookie overridden by a senior officer at the scene.

Prosecutors on Monday opposed the fired officer’s motion to be dismissed from the case. Officer Thomas Lane is charged with aiding and abetting both second-degree murder and manslaughter in Floyd's death. 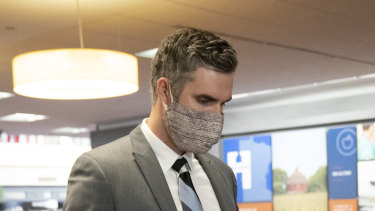 Former police officer Thomas Lane walks through security as he arrived for a hearing at the Hennepin County Government Center in Minneapolis, Minnepolis.Credit:AP

The defence contends that Lane, 37, was only on the job four days when Floyd died after veteran Officer Derek Chauvin pressed his knee against the handcuffed Black man’s neck for nearly eight minutes on May 25 as Floyd repeatedly said he could not breathe.

In the prosecution's motion, Minnesota Attorney General Keith Ellison argued “there is no free pass under state law for rookies who choose to disregard their training at the suggestion of a senior officer," and that Lane ignored Minneapolis Police Department policy that requires officers to try to stop another officer who is inappropriately applying physical force.

Lane and another rookie officer, J. Kueng, both held down Floyd as Chauvin pressed his knee against Floyd's neck.

Kueng knelt on Floyd's back and held Floyd's handcuffed arms in place while Lane restrained Floyd's legs with his hands and knees, according to the prosecution's memorandum.

Another officer, Tou Thao, held back the crowd. All four officers were later fired.

The prosecution said Floyd told the officers at least 20 times in the first five minutes that he was on the ground that he could not breathe, and he told them nearly 10 times he was dying.

"And then he fell silent. He stopped moving. He stopped breathing. And the officers could not find a pulse,” according to the court document. 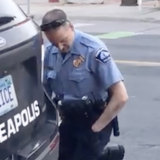 Darnella Frazier, a Minneapolis officer kneels on the neck of a handcuffed George Floyd who was pleading that he could not breathe in Minneapolis. Credit:AP

But Chauvin, Kueng and Lane continued to pin Floyd on the ground while Thao stood watch to prevent bystanders on the sidewalk from approaching, the memorandum said.

Lane continued to restrain Floyd's legs for about three minutes after telling the other officers that Floyd was “passing out,” the memo said, and for a minute and a half after Kueng said Floyd did not have a pulse.

As Floyd lost consciousness, Lane asked the other officers if they should roll Floyd on his side. But Chauvin said an ambulance was coming.

“Lane did nothing to challenge Chauvin’s answer. Not one thing,” the prosecution said. Instead, Lane continued to hold down Floyd’s legs with his hands.

Lane joined emergency responders in the ambulance and began performing CPR on Floyd at the request of emergency personnel, but Floyd was pronounced dead at the hospital that evening.

The next court hearing for the four is scheduled for September 11.