Adventurous Britons are flocking to the Lake District in search of some post-lockdown freedom and are heading to the national park – home to England’s highest mountain, Scafell Pike.

But police and rescue teams in the Cumbria beauty spot claim they’re close to being overwhelmed by a spike in emergency calls, as Britons underestimate the mountains.

Rescue chiefs say more than half of the callouts they had last week were ‘truly avoidable’ and down to ‘inexperience’.

Richard Warren, chairman of the Lake District Search and Mountain Rescue Association, even claimed walkers were dialling 999 in panic with ‘as little as 1 per cent battery’ on their mobiles, urging Cumbira police to help them. 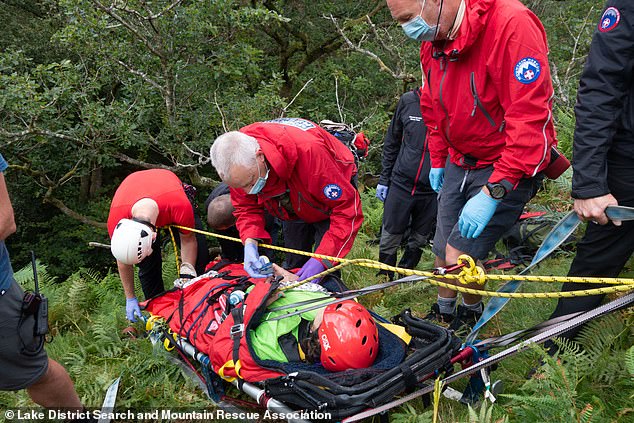 A ‘tidal wave’ of lost and injured staycation holidaymakers hiking among Britain’s tallest peaks are pushing rescue teams to breaking point, rescue chiefs have today warned. Pictured: A rescue team helps a woman in the Lake District in Cumbria 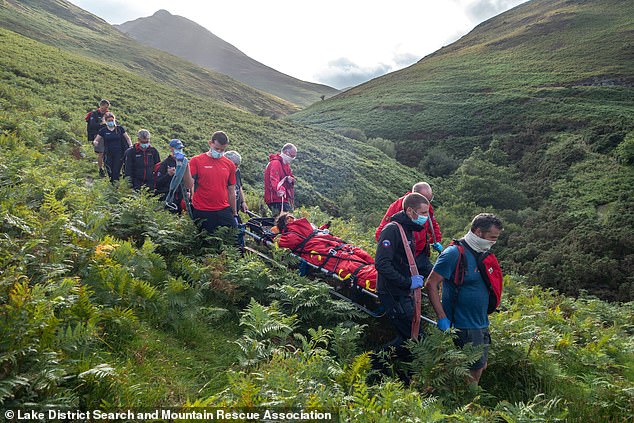 He said: ‘Cumbria Police and the Lake District’s mountain rescue teams have seen a tidal wave of avoidable rescues that is putting a real strain on our volunteer team members and is unsustainable.

Rowdy ‘Magaluf-style’ revellers are causing ‘total bedlam’ at one the country’s top beauty spots by drinking, illegally camping and dumping litter – as a mass clean-up begins across the UK following a weekend of illegal parties.

Residents in the Lake District say groups of young people sit around drinking, smash up fences for fire wood and scare animals in the national park are making parts of the beauty spot ‘like Blackpool seafront’.

Human waste has also been left in the gardens of some picturesque Cumbria homes, residents claim.

It comes as rubbish, including ‘laughing gas’ canisters, was left strewn across an area of Cardiff Bay for the second morning running, sparking a clean-up operation today.

The increase in anti-social behaviour in the Lake District follows calls by Richard Leafe, the chief executive of the national park, for younger people to come and enjoy the holiday hot-spot.

Mr Leafe told the Times that the area has seen a ‘more diverse demographic visiting’, but acknowledge that a ‘small minority’ had been causing issues.

Meanwhile, Joanne Bland, who runs the Yew Tree Farm in Rosthwaite with her husband, told the Times the situation had become ‘total bedlam’.

She said: ‘The people we were getting should have been in Magaluf.’

‘Since last Friday evening we have had 19 callouts in the Lake District with a focus on the Wasdale team with nine of these incidents.

‘Wasdale Mountain Rescue Team cover Scafell Pike, the highest mountain in England and a magnet for walkers and climbers.

‘Many of our walkers and climbers are very experienced and know exactly what they are doing.

‘However, 11 of the callouts were truly avoidable with inexperienced and ill prepared walkers finding themselves in serious, life threatening trouble being either missing or lost.’

‘Staycation holidays are introducing a new type of visitor to the national parks and the current quarantine rules have the potential to make the matter worse.

‘North Wales is experiencing a similar problem and we are sure that the same is being felt across many of the UK’s outdoor holiday destinations, great for the economy but a real issue for the volunteer rescue teams.’

On the one per cent battery issue, Mr Warren added: ‘This means that after the initial call their battery dies and the mountain rescue team cannot get back to them which makes finding them a bigger challenge requiring more numbers of the volunteers.’

Accidents in the mountains showed no sign of abating over the weekend.

One woman injured her ankle and had to be carried to safety on a stretcher.

She was saved by the Keswick Mountain Rescue Team – one of 12 squads working to keep people safe in the Lake District.

The land rescue warning comes after coast guard chiefs revealed Friday had been the busiest day for call outs in four years, despite lockdown restrictions being in place in some parts of the country.

Many calls were about people being cut off by the tide, missing children and swimmers getting into difficulty.

The total number of UK incidents was 329, including 232 callouts for coastguard rescue teams, 129 for lifeboats, 22 requiring aircraft and three for a hovercraft. 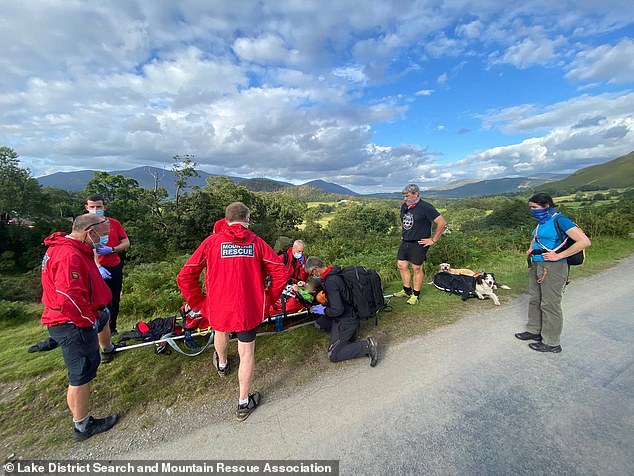 Accidents in the mountains showed no sign of abating over the weekend. One woman injured her ankle and had to be carried to safety on a stretcher (pictured) 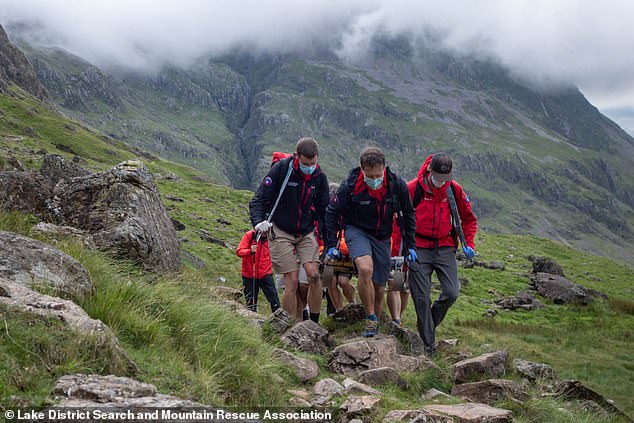 Julie-Anne Wood, of the Coastguard, said: ‘Friday was a beautiful day weather-wise in much of the UK. It was less beautiful a day for those who got themselves into trouble and had to be rescued.

‘Some people will remember July 31 for all the wrong reasons.

‘We completely understand that people want to enjoy the coast.

‘We also know that even the most experienced swimmer, paddleboarder and walker can be caught out by currents and tides respectively.

‘We’re heading into some more good weather and we would really ask you to check and double check the tide times – put a timer warning on a smartphone to remind you – be aware of things like rip currents, and make sure you have a means of contacting us if things do go wrong.’