A man drowning in the sea was rescued by nearby swimmers after his group shouted for help.

Rescuers dragged the man onto Southbourne beach, near Portman Ravine, after he was paddled to shore with a bodyboard.

The man was exhausted and he collapsed on the beach and vomited before the ambulance crew treated him.

When lifeguards and beach staff arrived they covered the other men in towels and blankets while they waited for the ambulance. 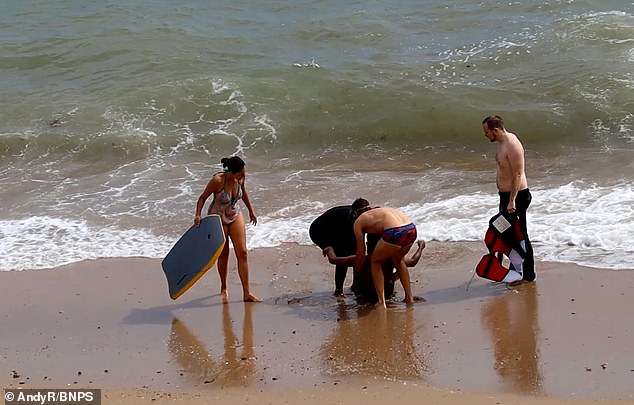 Richard Crump paddled out to the drowning man and then pulled him onto the shore on Southbourne beach, near Portman Ravine 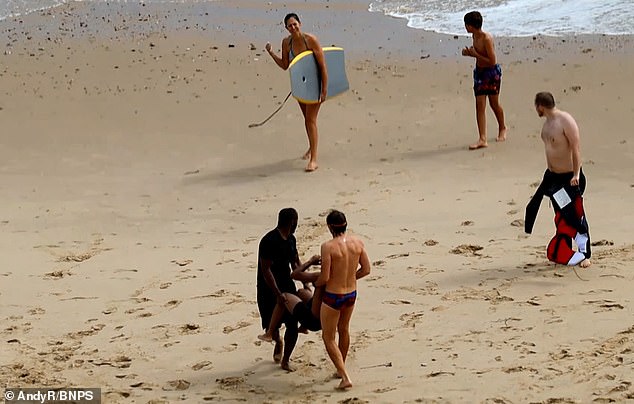 The group of men were swimming on the beach 100 ft from shore when they began struggling.

Richard Crump was swimming nearby with his wife and son and paddled with his son’s body board to try and help.

The man kept disappearing under the waves until Richard got to him and told him to grab onto his body board.

Richard told the Daily Echo: ‘Luckily he had enough of his senses left to hold on tight.

‘Another man helped me get him on to the beach.

‘At first I thought he was fine

‘He said a couple of words but then he became very unresponsive.

‘Lifeguards then arrived and rescued other people from the water.’ 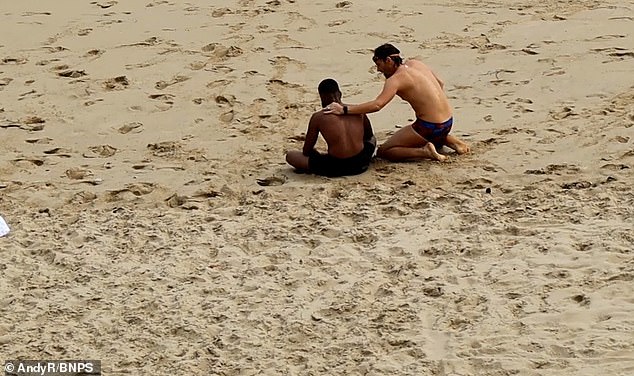 The man was exhausted, said a few words to Richard and then vomited for several minutes before becoming unresponsive

Andy R was testing his new camera equipment from the cliff top when he saw the scene play out below him.

He filmed the rescue but said it was a ‘horrible thing to witness’ and said he thinks the man would have drowned if he was not rescued exactly when he was.

Richard, an experienced sea-swimmer,  said it is important that people remember the sea is not as safe as it looks.