The 2018 suicide of the senior legal counsel at Victoria's Coroners Court was linked to a toxic workplace culture that turned her "dream job" into an "unimaginable nightmare" within a few weeks, an inquest has found.

New South Wales coroner Ian Guy, who was given charge of the investigation into Jess Wilby's death in order to avoid a conflict of interest, has provided a damning account of the court's culture across 2017-18 and a tragic insight into Ms Wilby's realisation that her descent into mental illness due to work stresses might damage her career in the law. 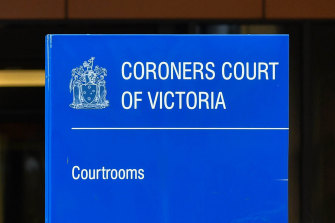 NSW coroner Ian Guy has issued a damning account of the workplace culture at the Coroners Court of Victoria.Credit:Joe Armao

Mr Guy's finding details the chaos at the court in 2018 when Ms Wilby had taken on the role of the senior legal counsel while still performing her previous job of principal in-house solicitor. The intense workload meant the she was working 12-hour days with little support from the court's executive.

He slammed the lack of interest from senior figures at the court in Ms Wilby's health after she suffered a breakdown at work in March 2018. Ms Wilby, who had no previous mental health issues, took her own life in September 2018. She was 45.

"The event of 15 March 2018 where Ms Wilby had a breakdown at the Court was plainly work-related, yet after returning to work the next day she continued with her responsibilities unchanged for another five weeks," Mr Guy found.

"Whilst on sick leave for three months, with the exception of her work friends, the lack of support from the Court and from CSV [Court Services Victoria] was stark. The pressure she felt she was under at work and her distress about the workplace environment is compelling."

The court at the time was headed by then state coroner Sara Hinchey. Judge Hinchey, now on the bench at Victoria's County Court, stood aside as state coroner in mid-2018 amid staff complaints about her conduct and the wider workplace culture. Mr Guy made no adverse findings specific to Judge Hinchey.

The inquest heard accounts from Ms Wilby's partner, family, colleagues and doctors about the extent of her passion for her job, her fear that she had been "set up to fail" by others at the court and her ambition to one day perhaps receive a judicial appointment.

She was so worried about the effect her mental illness might have on her reputation and career prospects that she did not disclose a suicide attempt to any of the seven GPs, three psychiatrists and four psychologists she saw over 39 appointments over about six months.

In a message to her sister six days before her death, Ms Wilby wrote: “I would contemplate the hospital if there could be some benefit-and it’s pointless now considering my state in which I’ll try anything but I think if I get admitted I can kiss the judicial appointment I was aiming for goodbye."

Ms Wilby also told her sister she wished she could have a "magic wand" to wave away her illness.

Ms Wilby's desire not to be viewed by colleagues at the court as someone struggling to cope with the demands of her work was apparent in her refusal to go on Workcover and instead use up her own leave and pay her medical bills herself.

The inquest found Ms Wilby had also documented her concerns about the dysfunction at the court and its toxic envionment.

Mr Guy found that several other senior court figures, including chief executives, principal registrars and senior legal counsel were all on long-term sick leave in 2017 or 2018. The court had no less than four acting CEO's in less than 12 months, he found.

There had also been four reviews into the court during the same period which higlighted mistrust among staff, vicarious trauma and a lack of clarity in its management structure as key problems. So bad was the environment that an external consultant hired to improve the court's practices resigned in February 2018, noting that it was the first time he had ever quit a such a job.

Mr Guy found one one senior court executive involved in overseeing Ms Wilby's role in 2018 had given the inquest "incorrect information" when he claimed her mental state was due to relationship issues at home. Mr Guy wrote that work was the only stress factor involved.

State Coroner John Cain Jr on Friday released a statement to express his and the court's sympathies to Ms Wilby's loved ones and promised to closely review Mr Guy's recommendations to make the workplace a more supporting and caring one.

Mr Guy identified that substantial improvements had been made in protocols at the court to monitor and better care for the mental welfare of its staff since Ms Wilby's passing. He also noted the workplace seemed a happier and more trusting one.

"It would however be simplistic and wrong to view her death as a case of a lawyer who
merely struggled with a difficult management role and who should have stayed with a
single doctor," Mr Guy concluded.

"It would also be wrong to view her perfectionist trait or concern for her reputation in the Court as a failing on her part. It should be remembered Ms Wilby suffered a work-related major depressive disorder. The workplace and its culture at the time, was deeply flawed."

His final message for Ms Wilby and her family was this: "The Coroners Court holds a unique position in the justice system. It seeks to find the truth, to effect change where needed and to bring closure to grieving families.

"There are an extraordinary number of dedicated people in this jurisdiction who work towards these ideals. One of them was Ms Wilby. Her identity was, as her sister Caroline observed, tied to her role and she was proud of what she did. On any view, Ms Wilby was entitled to and deserved far better."