Bitter row breaks out between cyclist parent, police officer and a headteacher after cyclist was asked to remove his face mask because it was ‘frightening the children’… so who is in the right?

A bitter row between a step-father, a headteacher, and a police officer outside a high school over the man’s ‘frightening’ cycling face mask has been captured on video.

The video, which has been shared 75,000 times, shows the headteacher saying the school had received complaints over the ‘frightening’ outerwear, and the policeman questioning the man’s ‘attitude’.

The cyclist step-father replies ‘stuff my attitude’ and asks what laws he has broken.

The row is understood to have occurred after the head teacher of Lynn Grove Academy asked the man to remove his cycle mask from his face because it was ‘frightening the children’ of the Gorleston-on-Sea, Norfolk school – who are 11 to 16 years old.

He refused her request, as he waited to collect his stepson, and she later said he had been ‘rude and abusive’. She reported him to the police after, she said, several parents ‘rang in’ to complain.

A dispute then broke out in front of a crowd of pupils as an officer repeatedly warned the step-father about his ‘aggressive’ behaviour and threatened to arrest him.

At one point the officer said: ‘There is a law in relation to you being rude to the headmistress of the school.’ 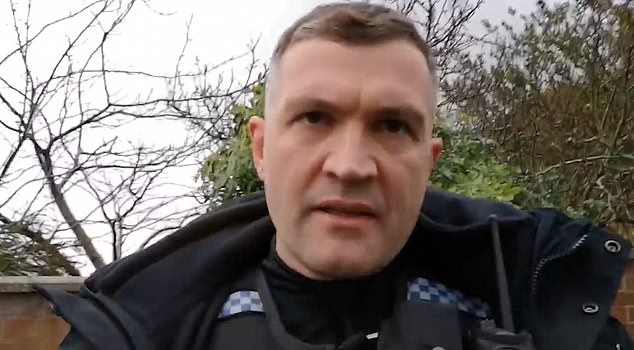 At one point the officer says: ‘There is a law in relation to you being rude to the headmistress of the school,’ in the course of his argument with a step-father outside the gates of Lynn Grove Academy in Gorleston-on-Sea, Norfolk 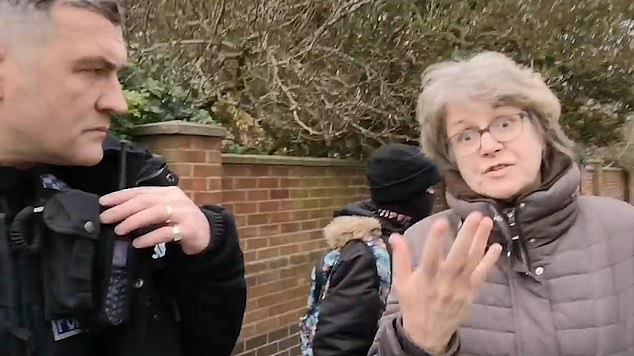 Later he adds that he might take legal action against the parent for causing him – the police officer – alarm or distress.

But the man accused the constable of trying to ‘intimidate’ him and said the school had no right to tell him he could not wear the mask – which he kept on because he was cold.

Footage of the confrontation – filmed by the aggrieved parent – was shared online last week and has been viewed more than 75,000 times.

It shows the officer approach the man and his stepson near the school gates – both wearing cycle masks and with bikes.

He questions him about his ‘attitude’ but the man says ‘stuff my attitude’ and asks what laws he has broken.

The constable alleges he has been rude to the head teacher and invites her over to ask what he said.

The step-father was wearing a ‘cycling mask’ but does not appear in the video – some cyclists wear a cloth covering, others wear a plastic-covered style of mask and some wear a mask often often on construction sites or in polluted cities

She says: ‘We asked you to not wear your face mask because we’ve had a number of complaints. It’s frightened some of the children.’

But when the man asks her to explain how he was ‘rude and abusive’ she refuses to answer, saying she does not wish to speak on camera.

The officer enquires which child the man has come to pick up, but the man replies: ‘That’s none of your business.’

The row escalates as the constable accuses him of setting a bad example to his stepson and he blasts back: ‘You work for me. Have I committed a crime?’

The officer tells him he is potentially causing ‘harassment, alarm and distress’ and says: ‘Your attitude is very anti and you’ve got a face mask on. That is not reasonable behaviour.’

To which the cyclist replies: ‘So? I’m cold. …Am I being detained? Because I’m getting bored. Excellent, let’s go.’

As he walks away with his boy, the officer calls out sarcastically: ‘I really appreciate your time, help and understanding.’

The man chimes back and the officer confronts him again, warning that he is ‘on the cusp’ of being arrested for breach of the peace.

The step-father insists he was simply ‘minding my own damn business’ but is told: ‘You just used the word ‘damn’. If you continue to swear, you will be arrested. You’re angry and you’re aggressive.’ 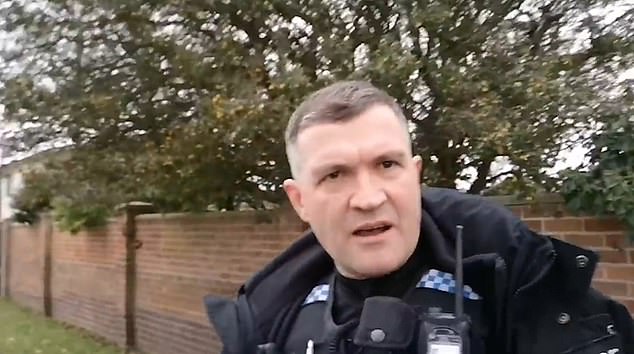 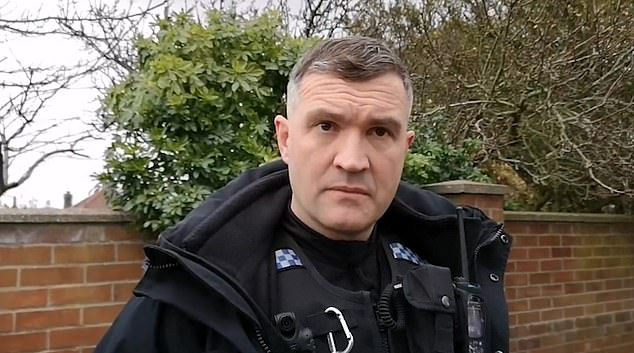 The boy’s step-father, heard but not seen in the video, asks what law he is breaking and at one point says ‘you work for me’

The constable ‘suggests’ that the man does not wait directly outside the school gates in future but the step-father replies: ‘Yes, I will wait there every single day he’s at school.’

The officer says he plans to ‘make some further enquiries’ before finally letting the man and his stepson leave.

Social media viewers praised the man for standing his ground and said the police should focus on investigating ‘real crimes’.

Carl Pounder said: ‘The copper is obviously not used to people expressing their rights. What a joke and a waste of taxpayer’s money.’

Rachel Walker wrote: ‘A law about being rude. Wish the police would deal with real issues.’

Tom Cotton asked: ‘Haven’t police got real crimes to solve? Having a disagreement with the school isn’t against the law.’

Kevin Tucker added: ‘That is why the public do not want to help the police right there.’

The person who posted the video online, understood to be the step-father, has claimed the school has now threatened ‘retaliatory detention’ if his stepson wears a cycling mask outside of school hours and beyond school property.

He wrote: ‘The mask is for me biking in the cold it covers my mouth and nose and neck. …We bike to school and the mask keeps his face safe from the weather, wind, rain, coldness.

‘They say that he is representing the school but yet he has none of the badges of the school any time he is going to and from school as he wears a coat over his uniform.. Its a childish retaliation and in my eyes its bullying.’

A Lynn Grove Academy spokesman said: ‘As a school we do not publicly comment on matters involving specific pupils or their parents.

‘However, it is the school’s clear policy that all protective face masks should be removed on school property as we have a duty of care to know who is on the premises at any one time and ensure our pupils are safe and secure.

‘This policy does not extend to the journey to and from school.’