A chemistry teacher who played a pornographic YouTube cartoon of Shrek having sex with an orphan on a classroom smart board has been struck off.

The sexually-graphic computer-animation, which showed ogre rape and murder care home children, was played at the end of her class after a student asked for it to be shown.

At a disciplinary hearing in Edinburgh last month the General Teaching Council for Scotland (GTCS), a senior teacher called the video ‘inappropriate, sexual and paedophilic’. 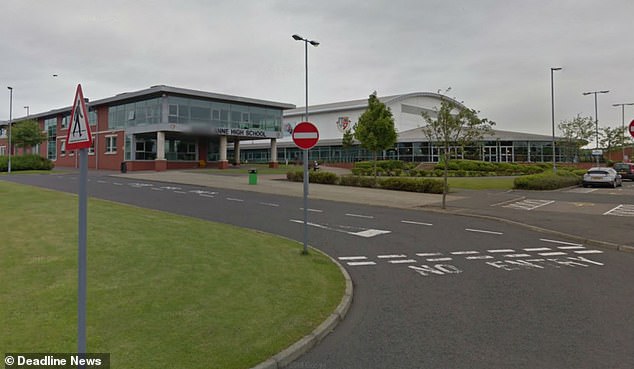 One pupil said some classmates had suggested watching the video at the end of class as a ‘joke’ and did not expect her to ‘laugh’ along with them.

Although the GTCS did not name the video they confirmed it showed Shrek having sex with an orphan.

The six-minute 18 certificate YouTube video has no affiliation to DreamWorks Pictures.

In the video a 12-year-old boy is seen being bullied by other children at the orphanage for how much he loves the ogre character.

Shrek then appears in the clip, holds the boy’s hand and follows him down to confront the other children.

The other care home children are then raped and murdered by Shrek before the cartoon has sex with the orphan.

One pupil who gave evidence at the hearing said the ‘Shrek video particularly stuck in her mind’ and ‘other inappropriate videos of a sexual nature were also shown.’ The pupil also said Ms Thompson ‘seemed to think that they were funny’ but she reported the incident to the Deputy Headteacher

Shrek is then seen taking the child back to his bedroom where he tells him ‘I am your father, laddie’ before the clip ends.

When confronted, the deputy headteacher said Ms Thompson ‘was defiant and confrontational, saying that it was the school’s fault, the previous teacher’s fault, the kids’ fault’.

One pupil who gave evidence at the hearing said the ‘Shrek video particularly stuck in her mind’ and ‘other inappropriate videos of a sexual nature were also shown’.

The pupil also said Ms Thompson ‘seemed to think that they were funny’ but she reported the incident to the Deputy Headteacher.

Another pupil told the hearing there were ‘two or three follow-up Shrek videos shown, with the same theme of Shrek having sexual intercourse with a boy’.

The videos were shown ‘once a week’ after the first clip was first displayed to the class, said the witness, who also gave evidence that a video about ‘German and Russian torture techniques’ was also shown.

Thompson was reported to bosses and suspended. Her case was then referred to the General Teaching Council for Scotland (GTCS).

She has now been found guilty by the GTCS of repeatedly allowing pupils to watch material of an ‘inappropriate and sexual nature’ during classes using council equipment between October and December, 2016.

A charge that she repeatedly left pupils unsupervised within the classroom was also found proved.

One student told the hearing Thompson left the classroom for ‘as long as half an hour’.

The GTCS panel found that she was unfit to teach and removed her name from the teaching register after Thompson failed to appear for her hearing.

Pupils, who were studying Higher Chemistry in Thompson’s class, gave evidence that the videos were shown weekly on a large smart board, through the teacher’s work computer.

One female student said the first video showed a cartoon of Shrek going into a residential school and having sexual intercourse with a young orphan boy aged about 12. It lasted approximately five to six minutes.

She said the videos made her feel uncomfortable but Thompson seemed to think that the clips were funny and did not turn them off.

The headteacher of the school viewed the videos after the matter was reported to her. She described them as ‘pornographic’ and said they showed ‘Shrek rape children in school’.

Thompson, who did not attend the disciplinary hearing, claimed that an inappropriate video had only been shown once.

In a written ruling, the GTCS panel said: ‘The panel regarded the conduct as very serious. The panel noted that the teacher had partially admitted the allegations, which demonstrated partial insight.

‘Her response document, however, did not demonstrate any insight into potential damage to the pupils from her behaviour.

‘Her previous response did say she was sorry for making pupils feel uncomfortable but she had not realised this was the situation. The teacher had not fully admitted the allegations, or offered a clear expression of regret to the class.

‘Because the teacher did not attend the hearing, the panel was unable to question her to ascertain more clearly the level of her insight in order to remediate the conduct and mitigate against the risk of it happening again.

‘The panel also determined that the public interest required a finding that the teacher was unfit to teach, given the need to protect children and young people, and the need to maintain the public’s confidence in registrants and in the GTCS as a regulator.’

Thompson cannot apply to be re-registered for two years.