His private life has been tumultuous. But, throughout it all, thrice-married publisher William Cash has enjoyed impressive commercial success, most notably with Spear’s luxury magazine for hedge funders and City slickers, whose readers reputedly have more than £5 million each to their names.

Now, though, I can disclose that Cash has been obliged to resign as a director of Spear’s.

His departure follows a bruising legal tussle with the man to whom he sold a majority share in the business a decade ago — multi-millionaire Mike Danson. 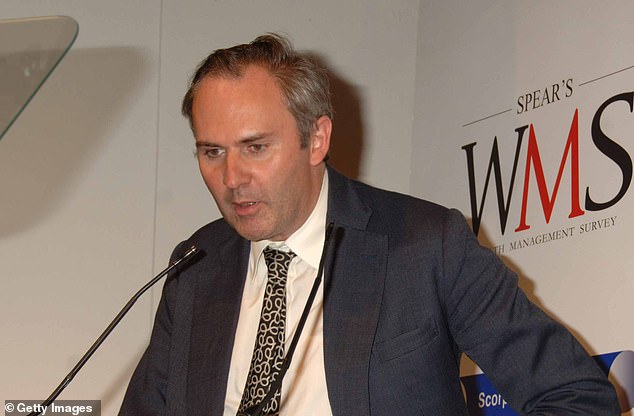 Spear’s alleged that Cash, whose first wife was jewellery heiress Ilaria Bulgari, had exploited knowledge about the magazine’s advertisers, readers and even its sponsors in order to establish a new publication, Mace, specialising in Westminster politics.

The 54-year-old Cash — eldest son of Tory MP Sir Bill Cash — was wounded by what he described as an ‘unfounded rush’ to litigation. He subsequently suspended publication of Mace until the smoke of legal battle had cleared.

It has now done so, revealing that Cash has departed from his grand Whitehall office, a stone’s throw from Downing Street. ‘Having founded Spear’s in 2005, I decided to leave the business to explore new opportunities,’ he says. 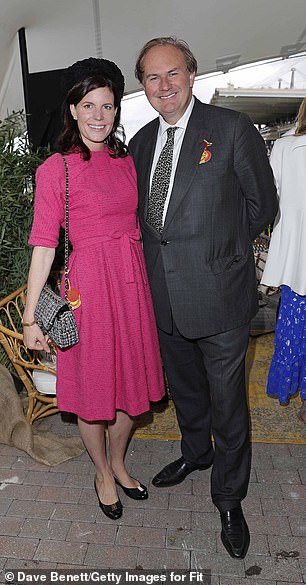 Cash is now married to Lady Laura Cathcart, the 36-year-old society milliner and daughter of the 7th Earl Cathcart, by whom he has a young son and a daughter

He is preparing for fresh challenges and resuming publication of his new political glossy, albeit in slightly altered circumstances. ‘His new office is above a Lebanese restaurant close to Victoria station,’ a friend tells me.

Cash is used to overcoming adversity. His marriage to Bulgari ended four years after their 2003 wedding, following his admission that he had engaged in a ‘Boris Becker moment’.

Cash is now married to Lady Laura Cathcart, the 36-year-old society milliner and daughter of the 7th Earl Cathcart, by whom he has a young son and a daughter.

Boris apparently agreed to let Cash raise his love-child, who was conceived when Boris was still Mayor of London — and before Cash’s relationship with Macintyre ended.

Let’s hope Mace proves to be half as exciting.

You can’t say the Duke of Beaufort doesn’t speak his mind. ‘It must have been said before, but Meghan Markle is to the Royal Family what Yoko Ono was to The Beatles,’ says the Duke, known to his friends as Bunter.

The Prince of Wales is an old family friend who attended the Duke’s father’s funeral, so that will only confirm Prince Harry’s suspicion that the Establishment is united against his wife.

Succession of coffees puts a gloss on Matt’s marriage

He plays the obsequious husband in TV drama Succession, and in real life it seems Matthew Macfadyen is also happy to play second fiddle to his actress wife Keeley Hawes.

The couple have been married for almost 16 years and have two children. ‘I guess that it gets better and better,’ Hawes, 44, says of their union, adding that Macfadyen, 45, will be on her mobile phone call log ‘probably six times a day’.

‘In one way or another, wherever we are in the world, we would never lose touch,’ she says. ‘There would never be a day we didn’t speak.

‘It’s also in the little things. Like you wake up and your husband has made you a coffee.

‘He also gave in to getting a second dog, so that’s true love. That’s the sign of a man who loves us.’

Woman Of Substance author Barbara Taylor Bradford is selling a selection of her designer handbags next week at Bonhams, including a £3,000 Hermes. They were given to her by her late husband, Bob.

‘Some Hermes shops offered to put me on a waiting list for a Birkin, but I was not going to go on a list for a handbag when I knew there were people on lists for kidneys,’ she says.

‘I thought it seemed rather shallow.’ 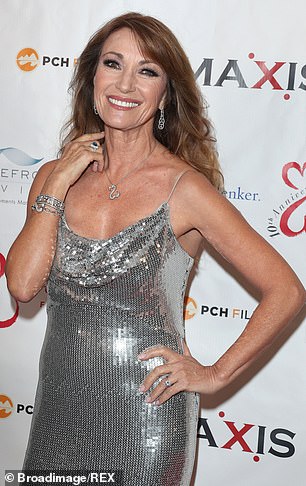 Most Hollywood stars avoid looking their real age, let alone adding on a few years. But Jane Seymour is happy to appear older for a new TV series.

The 69-year-old is playing Eleanor of Aquitaine in Glow And Darkness alongside Dame Joan Collins.

They were due to start shooting in March but had to wait until now due to lockdown restrictions.

The former Bond Girl from Middlesex shocked fans when she shared a picture of herself in period costume.

Eleanor (who was Henry II’s wife) lived until her early 80s. 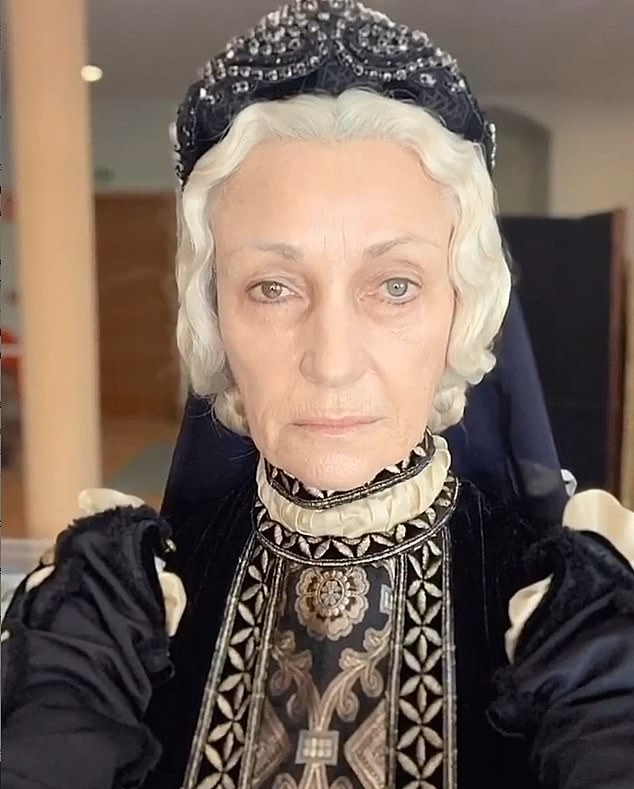 He has a £650 million fortune, an opera house and a stunning collection of contemporary art.

So might David Ross, co-founder of Carphone Warehouse and now chairman of the Royal Opera House (ROH), be tempted by one more acquisition?

David Hockney’s magnificent portrait of Sir David Webster is reluctantly being auctioned by the ROH this month at Christie’s.

The portrait of its former head is expected to fetch up to £18 million for the ROH, which has been starved of income due to lockdown and social distancing diktats.

Both the ROH and Ross decline to comment. ‘But if he buys it,’ an insider tells me, ‘he could gift or loan it to the opera house.’

And surely acquire a halo in the process.

Formula One heiress Tamara Ecclestone has spoken publicly for the first time since the arrival of her daughter, Serena, to whom she gave birth last month in Switzerland.

Bernie’s daughter, 36, who is married to businessman Jay Rutland, shared a sweet picture of their latest family member being cradled by their six-year-old daughter, Sophia.

‘Watching the love Fifi has for her baby sister makes me happier and prouder than I could have ever dreamed of,’ she captioned it.

Bernie, 89, who fathered his fourth child, a son named Ace, in July, said: ‘Serena and Ace are very close in age and so will be able to play together when they’re a little older.

‘I’m delighted that Serena is with us at last. I’m getting quite the collection of grandkids.’ 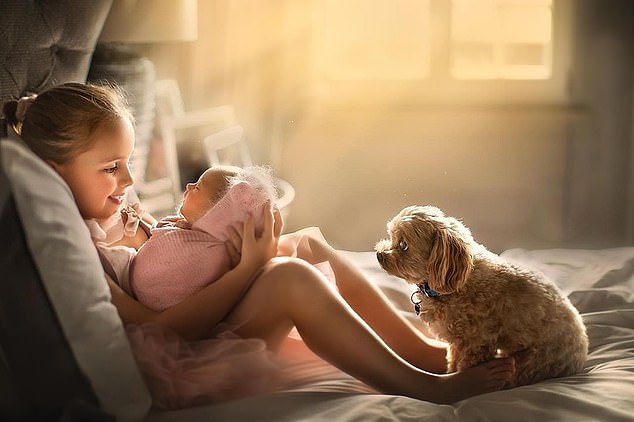 Bernie’s daughter, 36, who is married to businessman Jay Rutland, shared a sweet picture of their latest family member being cradled by their six-year-old daughter, Sophia 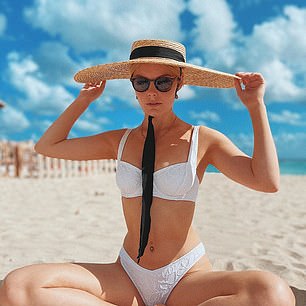 The 29-year-old was hoping for a ‘romantic mini-break’ when she flew to Italy this week with her boyfriend, model Jake Chatterton, only to find the country had announced face coverings were about to be made mandatory in public.

Nell, whose mother is author Cressida Connolly (first wife of the late AA Gill), was at least able to enjoy some mask-free time on the beach the day before the edict was introduced.

Sharing a picture of herself in a white bikini and sun hat (right), she described it as ‘fun in the sun’.