Senior MPs are calling for face masks to be compulsory in Parliament’s division lobbies and corridors.

Although the chamber looks grand, many spaces in the Commons are badly ventilated and difficult to socially distance in – sparking suggestions that face coverings should be mandatory as the government is planning for shops.

Voting is a particular pinch point as MPs have to file through the Aye and Noe lobbies to record their views, and ‘remote’ ballots have now been ditched.

Face covering are already offered to politicians in the House, but few choose to wear them.

Labour figures told MailOnline many Tories do not even bother with basic social distancing, and called for the rules to be upgraded. 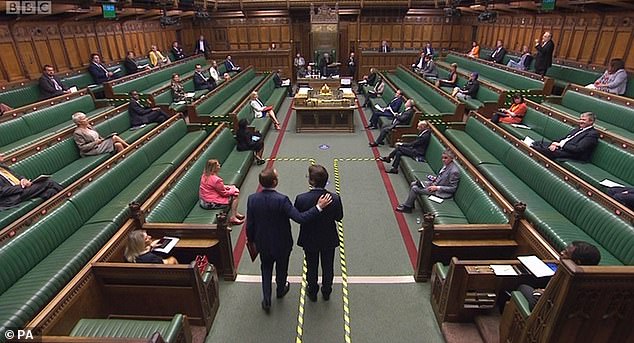 One Labour MP pointed to the recent incident where Matt Hancock stood next to a colleague in the chamber, and even patted him on the shoulder, as evidence masks are needed

One frontbench MP said: ‘No-one appears to wear them (at the moment). The Tories, loads of them don’t socially distance at all.’

The MP pointed to the recent incident where Matt Hancock stood next to a colleague in the chamber, and even patted him on the shoulder.

‘It is worse than that when the cameras aren’t there. If they are saying you have got to have it in shops, it’s difficult when you are having votes…

‘When you have a vote when everyone is queuing up, you would have them then.’

Sources close to Commons Leader Jacob Rees-Mogg said he was ‘absolutely’ open to wearing face masks where the government advised they are needed.

Mr Johnson has been seen out and about in a mask for the first time over recent days.

Tory MP Michael Fabricant suggested if masks did become compulsory politicians should wear their party’s colours – although he added that he personally had a red mask made out ‘an old pair of boxer shorts’.

‘MPs are already branded – I daren’t say what as,’ he said.

‘But the picture of MPs in identical face masks so indistinguishable from each other like sheep would be a whip’s dream come true.’

A senior Commons source said masks branded with the Parliamentary Portcullis symbol might prove popular among MPs if they were produced.

‘Could be a good seller in the shop,’ the source said. 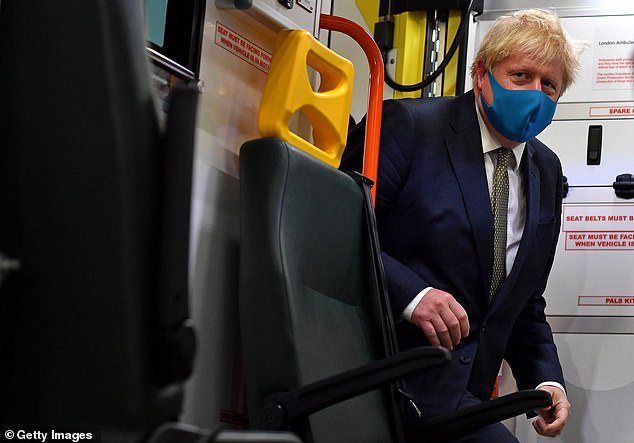 Mr Johnson has been seen out and about in a mask for the first time over recent days, with coverings set to be compulsory in shops from July 24