STEPHEN GLOVER: I admire the PM — but her deal sticks in the craw. How DID it come to this?

That it should have come to this! In a desperate last throw of the dice, yesterday Theresa May announced several measures which appear to run counter to the Brexit strategy she has developed over the past couple of years.

The opportunity to vote for a second referendum, last-minute concessions over workers’ rights and environmental protection, and a possible temporary embrace of a customs union — all these are proposals that amount to nothing less than a political bombshell.

There is little doubt that many Leave voters will be shocked by the scale of the volte-face. My bet is that the happiest person in the kingdom will be Nigel Farage, to whose Brexit Party Mrs May has just delivered another lorry load of votes before tomorrow’s European Elections. 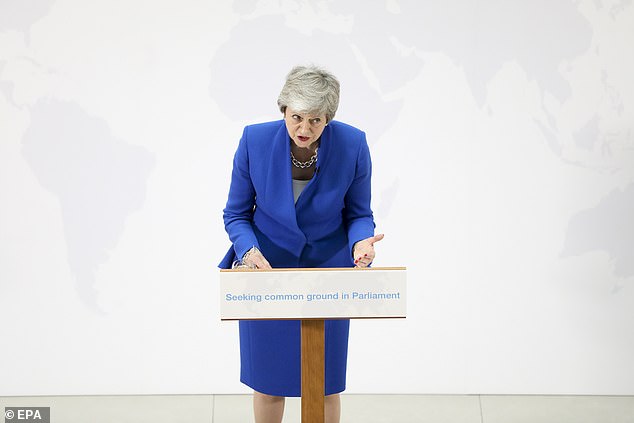 British prime minister Theresa May delivers a speech setting out a new proposal for her Brexit deal in London, Britain, on 21 May 2019

But let us, just for a moment, try to see it from Mrs May’s point of view. Three times she has been defeated in the Commons by a combination of hard-core Tory Brexiteers and Remainers, Labour, the Scots Nats and the ever-intransigent Democratic Unionist Party.

For my money, the Withdrawal Agreement as it was previously presented, though undoubtedly flawed, honoured the outcome of the 2016 referendum — and I am sorry that it did not command a majority in the Commons. It was far preferable to this latest compromise. 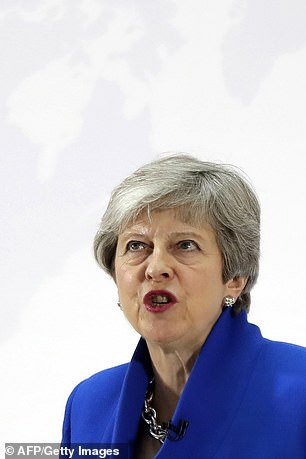 British Prime Minister Theresa May on Tuesday outlined a series of incentives for MPs to support her Brexit deal, saying there was ‘one last chance’ to end the deadlock

One can understand why a Prime Minister with an eye on history, and a heart committed to delivering Brexit, should have struggled to find another solution to the political impasse in which we find ourselves. She deserves our commendation for that.

And many would also agree with Mrs May when she said the deadlock over Brexit was having a ‘corrosive’ impact on British politics, and stopping progress in other areas. Half the country is mad with frustration, the other half with boredom.

So Mrs May’s ‘one last chance’ is in principle to be supported. Even now, though I am aghast at some of these concessions, particularly the possibility of a second referendum, I am tempted to doff my cap at this stubborn, spirited woman who never gives up.

And yet this latest version of her deal will challenge the loyalty even of sane, pragmatic Leavers without winning the backing of enough Labour Remainers in the Commons. Understandable though this latest gamble may be, I fear it is above all an act of political ineptitude.

What she has done is to appeal over the heads of hard-line Brexiteers to Labour, much as Ted Heath did, with ultimate success, when as prime minister in 1972 he piloted the European Communities Bill through Parliament which led to our joining what was then called the Common Market the following year.

But whereas 47 years ago there was a sizeable minority of Labour MPs ready to defy their party whip and vote with the Conservative government, it seems unlikely that more than a handful of their modern-day counterparts will do the same.

More from Stephen Glover for the Daily Mail…

Even Labour MP Lisa Nandy, in whom No. 10 has invested hopes as someone who might switch to its cause, indicated after Mrs May’s speech yesterday that she won’t support the Government. It’s possible she and others will change their minds if Labour receives a drubbing in tomorrow’s elections, but Mrs May would be unwise to count on it.

Jeremy Corbyn has made abundantly clear that the Labour leadership remains unimpressed by her deal, and we may pretty confidently suppose that his MPs will be whipped into the ‘No’ lobby in early June.

It many ways, of course, this is an example of utter hypocrisy and opportunism on the part of Corbyn since, as Cabinet Minister Rory Stewart recently pointed out, there is only the tiniest degree of difference between what Labour has long demanded and Mrs May’s revamped deal.

But Corbyn sees the Prime Minister’s crumbled — if not vanished — authority, and will do nothing to help her. His hopes are fixed on a general election. How ironic it will be for Labour if a new Tory prime minister ends up leading this country towards No Deal, which its Brexit spokesman Sir Keir Starmer has termed a catastrophe.

As for backbench Tories, it’s possible that a sprinkling of hitherto rebarbative Remainer MPs will be drawn to the latest iteration of Mrs May’s agreement, but almost certain that opposition will harden among the extreme faction. Cheerleaders Nigel Evans and Steve Baker said as much last night.

They are plainly unimpressed by the Prime Minister’s repetition of a legal obligation on the Government’s part to find alternative arrangements to maintain an open border in Northern Ireland by the end of 2020 to ensure the controversial backstop plan never comes into force. What happens if Brussels doesn’t accept such proposals?

Even Andrew Percy, chairman of the moderate Brexit Delivery Group of Tory MPs, and someone who has supported the Prime Minister on three previous occasions, made clear yesterday that he will no longer back her. 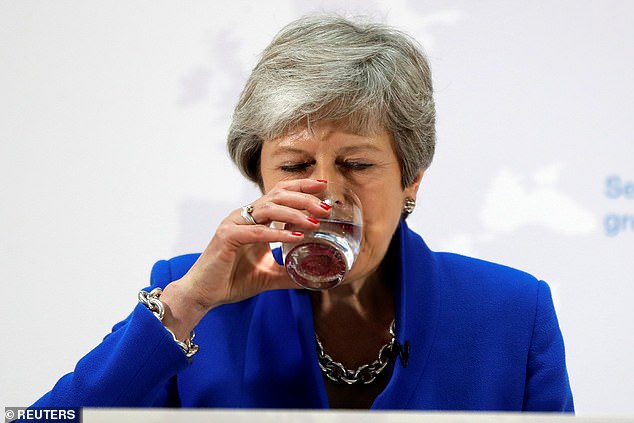 Britain’s Prime Minister Theresa May drinks water during her speech on Brexit in London, Britain May 21, 2019

Meanwhile, the Scots Nats’ leader Nicola Sturgeon said her party will continue to oppose Mrs May. So will the Democratic Unionists, evidently unmoved by her restated assurance that Northern Ireland will remain aligned with the rest of the UK in terms of regulation following Brexit.

All in all, it is hard, if not impossible, to see how the Prime Minister will garner enough votes to fulfil her dream of going down in history as the woman who took this country out of the EU.

The fascinating question is whether she realises how impossibly big the odds against her have become as would-be successors openly compete for her crown. Have she and her advisers insulated themselves against reality, or is she simply determined to be seen heading towards political oblivion doing what she believes is the right thing?

Maybe both factors are in play. Her facilitation of a second referendum if her Bill should pass — though she emphasised yesterday that she remains opposed to one — does suggest that in her desperation to deliver Brexit she is throwing political good sense to the wind.

Just as she pledged a hundred times that Britain would leave the EU on March 29, so she has declared herself on countless occasions against a rerun of the June 2016 referendum, which she knew would be a betrayal of the largest democratic vote in British history. 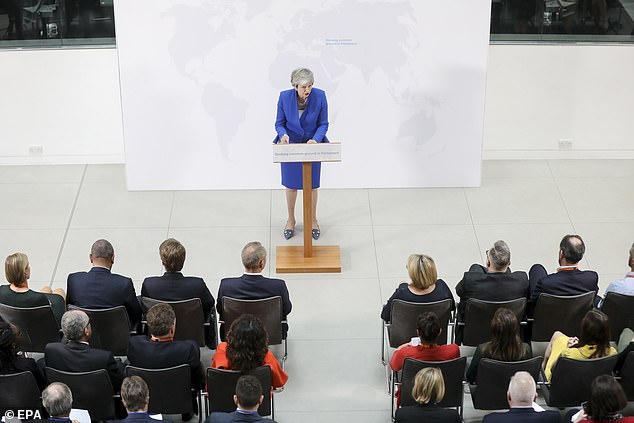 She may not want another referendum — and it is far from certain there is a majority for one in the Commons — but she is taking the risk of enabling such an outcome. Much as I admire her resilience and fortitude, this latest concession sticks in the craw.

I can understand why the Prime Minister is determined to roll the dice one more time, but what is the point if the odds against her are so great? Her calculations are surely awry. She may emerge with honour but not, I think, with her reputation for political competence enhanced.

Let her have one more throw. She has earned that right. But more than ever, it seems that it’s time this brave but, now somewhat misguided, woman stepped aside to allow someone with fresh ideas and new energy to have a go.