A 13-year-old girl who was killed by a gunman at the Gilroy Garlic Festival in Northern California on Sunday may have inadvertently saved another relative’s life by staying behind amid the shooting to walk with a relative who uses a cane, the family said.

Keyla Salazar, 13, was identified late Monday by the Santa Clara County Coroner’s Office, as the third victim fatally shot by a 19-year-old gunman while attending the Gilroy Garlic Festival.

A man in his 20s, a 6-year-old and Salazar were killed when Santino William Legan, 19, open-fired at the festival Sunday before turning his “AK-47-type assault rifle” at responding officers. Legan was fatally shot by police. At least 11 others were injured. 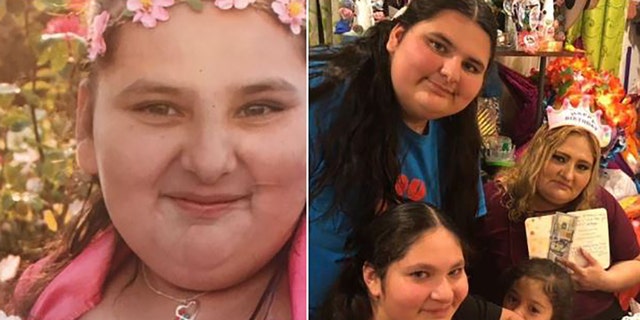 Keyla Salazar, 13, was one of three people killed when a gunman open-fired at an outdoor food festival in northern California over the weekend.
(GoFundMe)

Salazar’s aunt, Katiuska Pimentel Vargas, told the Associated Press Monday that her niece was eating ice cream with family members when they heard gunshots and began to flee. Salazar stayed behind to keep pace with a relative who uses a cane and was shot with a bullet that otherwise might have hit the woman she was waiting for, Pimentel Vargas said.

Pimentel Vargas told BuzzFeed News the teen would have turned 14 on Aug. 4 and was going to start the ninth grade this fall. "I have no words to describe this pain I’m feeling," she wrote on Facebook Monday in a post honoring her late niece.

"We just want Keyla to be remembered as someone that is beautiful," Pimentel said. "She really cared a lot about other people. She loved animals. She had big dreams and aspirations and her life was cut short."

“Together we can help with this heartbreaking loss,” Mann wrote. The page had raised over $22,000 as of Monday night, nearing the halfway point of its $50,000 goal. Family and friends shared the crowdsourcing page to Facebook Monday to ask for donations.

“Please donate. She is my friends daughter and unfortunately lost her life in a senseless act. Please keep her family in your prayers,” Jeannette Godinez also wrote on Facebook.

The Gilroy Police department announced Monday that officers have served two search warrants associated with the suspect as police work to investigate what may have led Legan to carry out the horrific assault.

The man in his 20s who was killed had been identified as Trevor Irby, 25, a recent graduate of Keuka College in upstate New York. Steven Romero, 6, of San Jose was also killed in the incident, the coroner’s officer said. Authorities said it is too early in the investigation to determine if the victims killed in the shooting were targeted by the gunman.