Terrifying moment lorry explodes in a ball of flames after car slams into it, leaving a driver in hospital

This is the dramatic moment a semi truck bursts into flames instantly after a tray wheel on the motorway caused a collision with a silver car.

The dash cam footage was captured in Voronezh, southwestern Russia by the camera in a car travelling right behind the silver Ford Focus that was involved in the collision.

The driver of that car was taken to a medical facility according to reports.

After an agonising wait the driver of the UK-based Fredliner truck can be seen scurrying from his vehicle as thick, black smoke billows out of it.

The large red Scania immediately burst into flames when a wheel that disconnected from it rolled into the path of the Focus which then hit the truck head on. 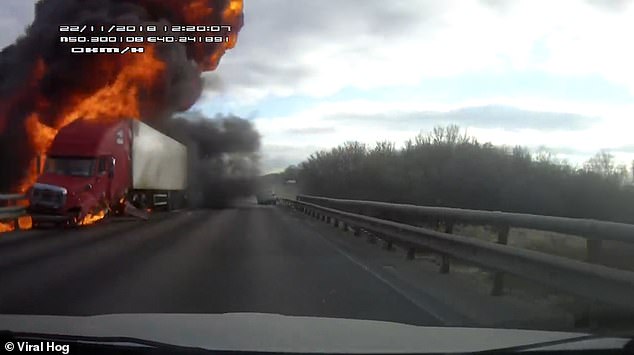 People can be seen running down the hill off to the side, in an apparent attempt to aid the driver.

One of the occupants of the car containing the dash-cam which caught the footage can be heard wailing uncontrollably as the fire took hold of the truck.

She had been calm at the beginning, alerting the male driver to reverse the car after the collision, but broke into hysterics when she saw the flames and heard the thunderous explosions.

The incident occurred on November 22 this year, around 12:20 in the afternoon. 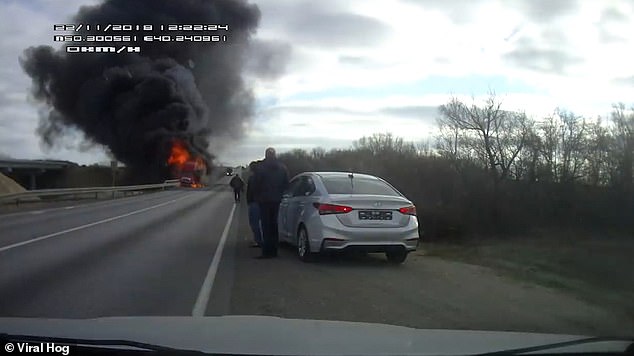