Theresa May warns ‘we cannot simply arrest ourselves’ out of knife crisis as she unveils new Glasgow-style model to tackle problem by holding teachers, nurses and police officers to account

Theresa May has warned it needs more than just extra police to tackle Britain’s knife crime epidemic as she attempts to use every arm of the state to cut the number of stabbings.

The Prime Minister insisted ‘we cannot simply arrest ourselves’ out of the problem following the first meeting of a summit on the issue at Downing Street this morning.

More than 100 experts are meeting after the Government unveiled new plans which could see frontline workers in schools, hospitals and police stations accountable for failing to ‘spot warning signs’ of violent crime among young people.

It comes after another week of carnage on the streets of Britain, with 14 knifings in just five days nationwide and four people attacked ‘at random’ in north London over the weekend. 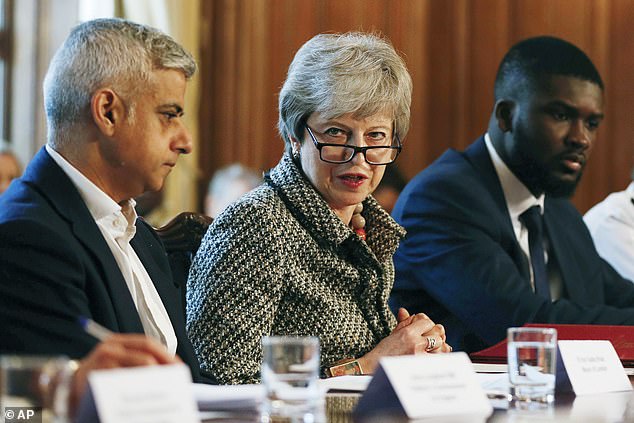 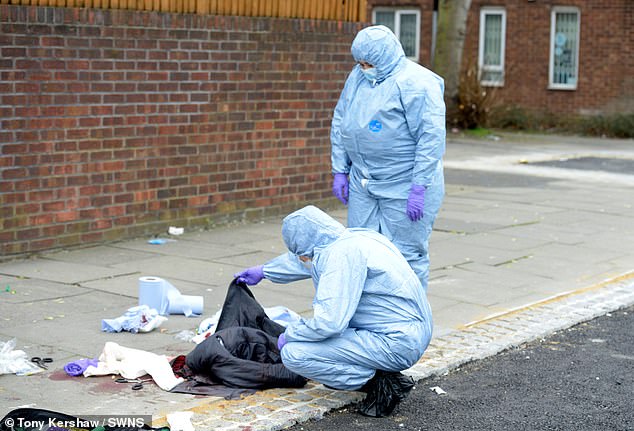 The meeting came after a weekend of fresh carnage on London’s streets, with four victims stabbed in unprovoked ‘random’ attacks in Edmonton in the north of the capital

Home Secretary Sajid Javid floated the idea of a so-called ‘public health duty’ intended to help spot the warning signs that a young person could be in danger, ‘such as presenting in A&E with a suspicious injury, to worrying behaviour at school or issues at home’.

The new ‘public health’ approach will see Mr Javid launch a consultation today that would impose legal duties on public bodies such as schools and hospitals.

It would be very similar to the system in Glasgow, formerly the knife crime capital of Europe, where stab wounds have halved in 12 years.

It also mirrors the anti-terrorism Prevent strategy, set up in 2006, which is used to identify youngsters at risk of being sucked into extremism.

Under the Glasgow model, gang members and those at risk of joining gangs are referred to violence reduction units. There, they are offered mentoring by someone with similar experiences of violence or given opportunities to further their education.

Doctors are invited into schools to show graphic images of knife wounds and pupils are also taught about the tough sentences for violent crimes. 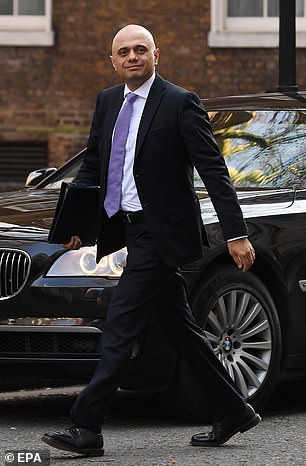 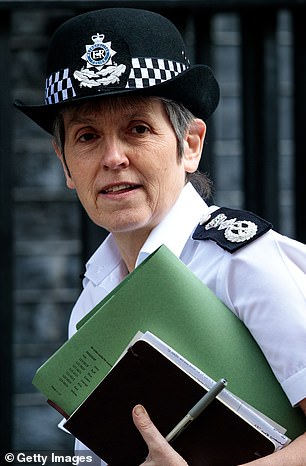 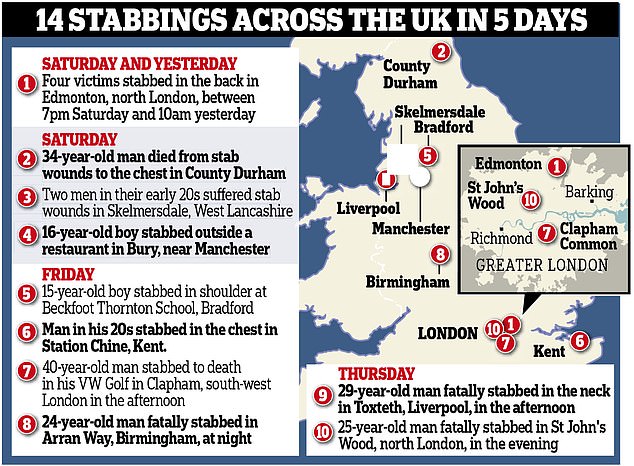 A consultation in England and Wales will assess the extent to which those on the front line will be held to account for failing to prevent a young person getting involved in violence, a Home Office spokesman said.

Mrs May is hosting the serious youth violence summit from Monday, with experts including Met Police Commissioner Cressida Dick, Patrick Green from the Ben Kinsella Trust, and Baroness Newlove, the Victims’ Commissioner for England and Wales, whose husband Garry was beaten to death by a gang vandalising his car in 2007.

Opening the event, she said: ‘In the recent months we know we have seen an appalling number of young lives cut short or devastated by serious violent crime, including of course a number of horrifying incidents that took place just over this weekend.

‘As we look at what’s happened, of course what we also see is that in many cases the perpetrators of these crimes are as young as their victims and this is something that has to be something of deep concern to us all.’ 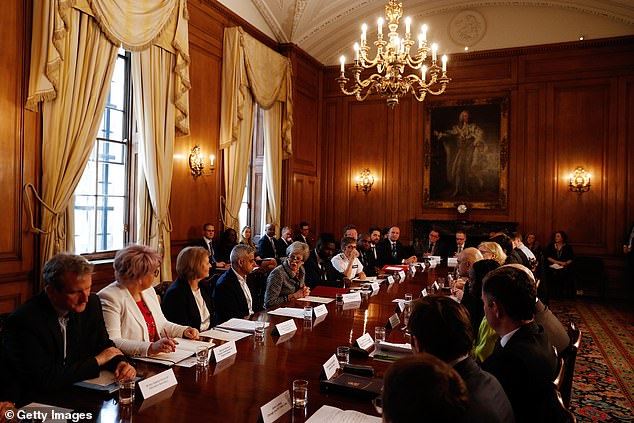 The Prime Minister said the problem affects ‘us collectively as a society’ and must be tackled in a ‘co-ordinated’ way.

‘Of course we will always make sure that the resources and tools are there to be able to apprehend and deal with those who are carrying and using knives and that the police have what they need to do,’ she said.

‘But we cannot simply arrest ourselves out of this problem.

‘This is a wider problem, it is more deep-seated and we have to have a more coordinated effort.’

It comes a day after Mr Javid, who is also attending the summit, granted police new powers to increase stop and search activity following a spate of bloodshed across London and the rest of England since the start of 2019.

Mr Javid said: ‘Violent crime is like a disease rotting our society and it’s essential that all public bodies work together to treat the root causes.

‘The public health, multi-agency approach has a proven track record and I’m confident that making it a legal duty will help stop this senseless violence and create long-term change.

‘I’m committed to ending this scourge and will use all the tools at my disposal to do so.’ 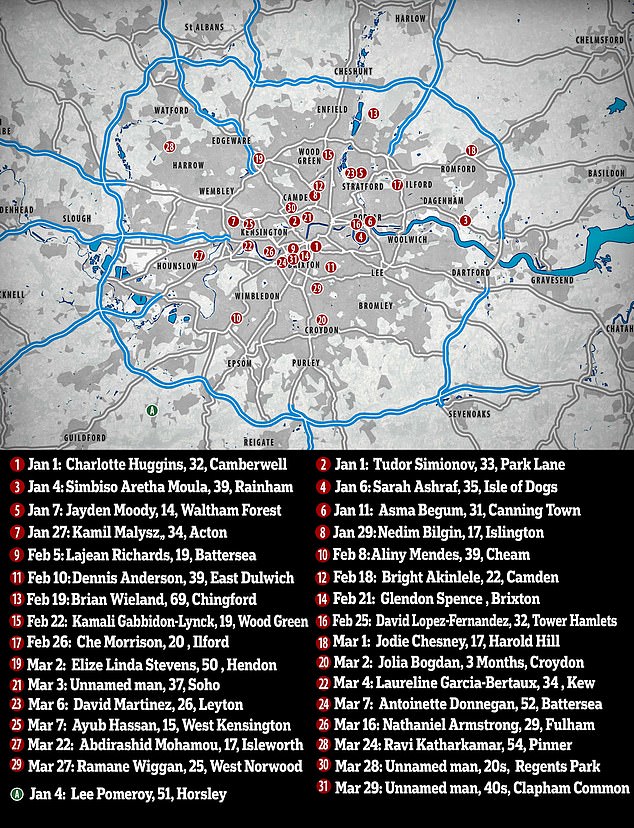 As well as the summit, The Prime Minister will also meet privately with the families of a number of victims of knife crime to listen to their first-hand experiences of this issue.

Writing in the Daily Mail on Monday, Mrs May and Mr Javid added: ‘Of course, nothing we say or do this week will bring back the children who were so cruelly taken from them.

‘But we can promise that we will do whatever it takes to confront and defeat the scourge of youth violence. And that we will do everything in our power to stop more families suffering as they have suffered.’ 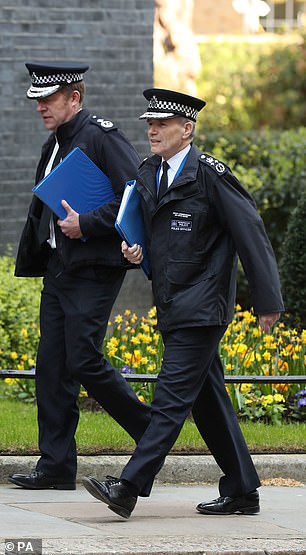 The consultation, mooted by Mr Javid in the Commons four weeks ago, will open on Monday until May 28 to the public and professionals across the UK.

It follows days of violence across the country, including a slew of serious stabbings in Edmonton, north London, from Saturday night into Sunday morning, as well as the death of a 40-year-old motorist at the wheel of his vehicle in Clapham, south-west London, and a 29-year-old fatally stabbed on Thursday afternoon in Toxteth, Liverpool.

There were 285 homicides where the method of killing was by a knife or sharp instrument in the year to March 2018 – the highest number since records started in 1946.

Mrs May came under fire last month after she suggested that police cuts were not to blame for a spate of fatal stabbings on teenagers.

Senior figures in policing were at odds with the Prime Minister as they called for a reverse to slashes in staffing levels.

On Monday, Mike Cunningham, chief executive of the College of Policing, welcomed recent announcements on extra measures and funding, but warned against the assumption that ‘with more resources, policing alone can solve this problem’.

‘If partners across health, education and local government play their part, we can make a real difference and help prevent more tragic deaths,’ he told Sky News.

However, one of those attending the summit, Martin Hewitt – the new chair of the National Police Chiefs’ Council, suggested the proposed funding boost is not enough.

He wrote in a blog: ‘This year there will be £970 million more for policing than the previous year – that is positive but it’s not enough to meet all the challenges that the service faces.

‘So an important part of my role will be working with policing and crime commissioners and the Home Office to make an evidence-based case for increased investment in the forthcoming government spending review as well as developing ambitious plans to maximise every penny we have.’

Others have suggested the proposals could put greater pressure on frontline staff.

‘Nursing staff already have a key role in safeguarding patients, whether that’s working in the community, in schools or in hospitals and it’s unclear how putting a further obligation on our members, already working incredibly hard to do all they can for patients, will prevent violent crime.’

Dr Mary Bousted, joint general secretary of the National Education Union, said: ‘Neither the blame for or the solution to violent crime can be laid at the door of schools or frontline hospital staff.

‘Schools already have strong safeguarding practices in place and staff will be alerted to any issues of concern.

‘The problem is what happens after issues of concern have been identified.