Donald Trump declared victory on Tuesday over the Paris Climate Accord after France’s Emmanuel Macron halted a fuel tax increase amid mass protests.

Trump claimed that Macron was finally seeing things his way more than a year after he pulled out of the agreement as his counterpart delayed the tax hike on diesel that was scheduled to kick in at the beginning of January.

‘I am glad that my friend @EmmanuelMacron and the protestors in Paris have agreed with the conclusion I reached two years ago. The Paris Agreement is fatally flawed because it raises the price of energy for responsible countries while whitewashing some of the worst polluters in the world,’ Trump tweeted. 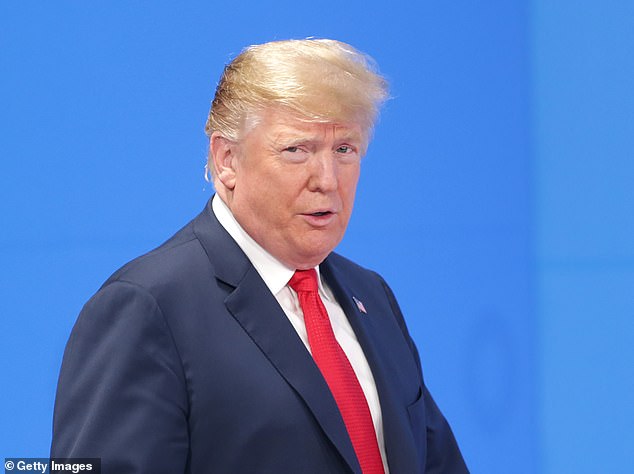 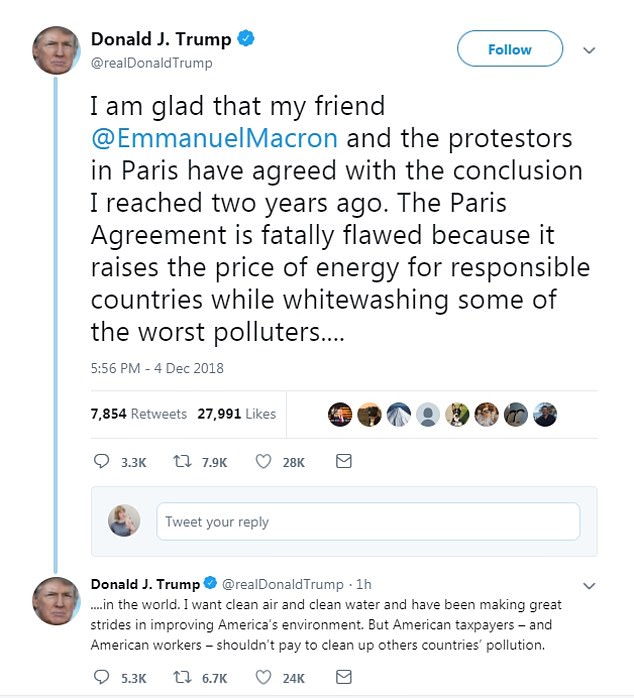 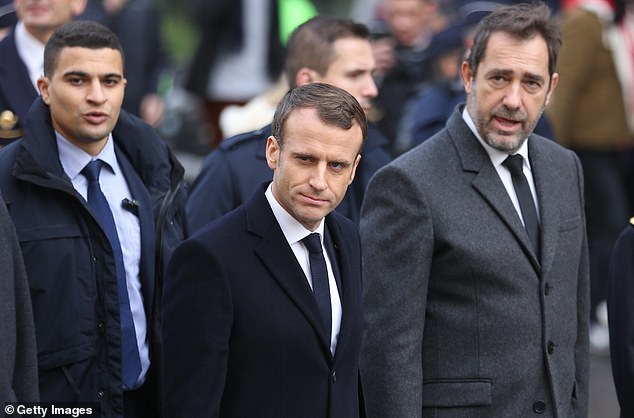 His victory lap followed tweets earlier in the day in which he spread a famous right-wing radio host’s unproven claim that rioters in Paris have been heard shouting that they want the U.S. president to replace their own

His victory lap followed tweets earlier in the day in which he spread a famous right-wing radio host’s unproven claim that rioters in Paris have been heard shouting that they want the U.S. president to replace their own.

Trump had retweeted a message from Charlie Kirk, president of the conservative Turning Point USA youth organization, that ‘We want Trump’ is ‘being chanted through the streets of Paris.’

Kirk appeared to take that claim from a broadcast Monday of Rush Limbaugh, who said French President Emanuel Macron has seen a proposed fuel tax increase – a measure intended to fight global warming – generate riots larger than any ‘since the student protests of May 1968.’

‘You know what’s been overheard in some of the cheering over there? I kid you not. I know friends who are there,’ Limbaugh said. ‘There are some people wearing the yellow vests chanting, “We want Trump” among the rioters in Paris! “We want Trump!” ‘

American conservative youth activist Charlie Kirk tweeted a claim that originated on the Rush Limbaugh talk-radio program, that ‘We want Trump’ was ‘being chanted through the streets of Paris’ 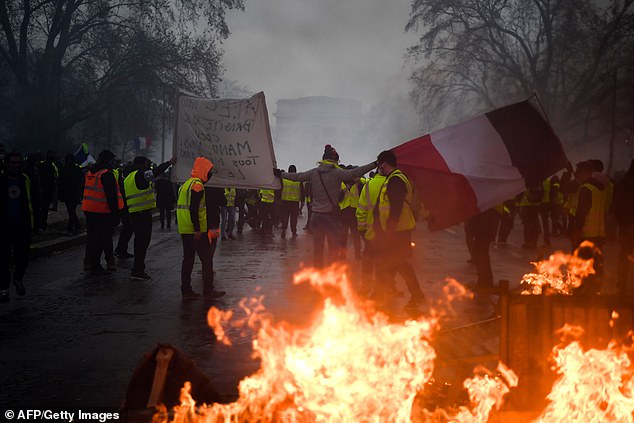 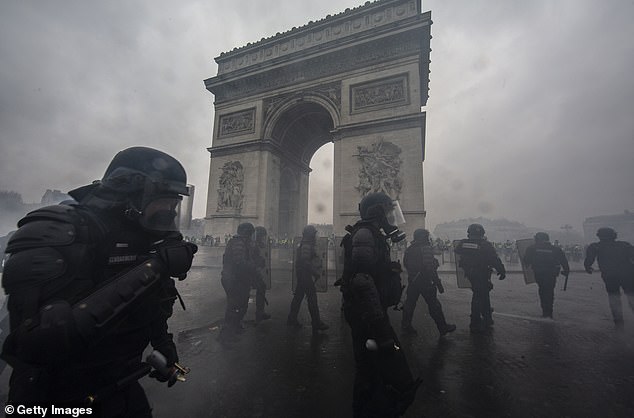 The French protests, which have turned parts of Paris into war zones, are a role reversal from American social justice movements that often demand more government taxing and spending

Despite a blanket of media coverage of the riots, video has not emerged of participants shouting for the American president.

One YouTube ‘We want Trump!’ video that parent company Google’s search engine described as French on Monday was actually shot in Great Britain.

The video’s title was changed on Tuesday.

Yet Kirk echoed Limbaugh’s suggestion that ‘the American media is doing its best to downplay all of this.’

‘There are riots in socialist France because of radical leftist fuel taxes,’ Kirk wrote. ‘Media barely mentioning this. America is booming, Europe is burning They want to cover up the middle class rebellion against cultural Marxism.’

Macron made a U-turn hours earlier, caving to protests and suspending the fuel tax hikes that the French public opposed in huge numbers.

Trump applauded him in a set of tweets later on Tuesday that said he was glad that Macron and the protestors ‘have agreed with the conclusion I reached two years ago’ on the cost of protecting the climate.

‘The Paris Agreement is fatally flawed because it raises the price of energy for responsible countries while whitewashing some of the worst polluters in the world,’ he said. ‘I want clean air and clean water and have been making great strides in improving America’s environment. But American taxpayers – and American workers – shouldn’t pay to clean up others countries’ pollution.’ 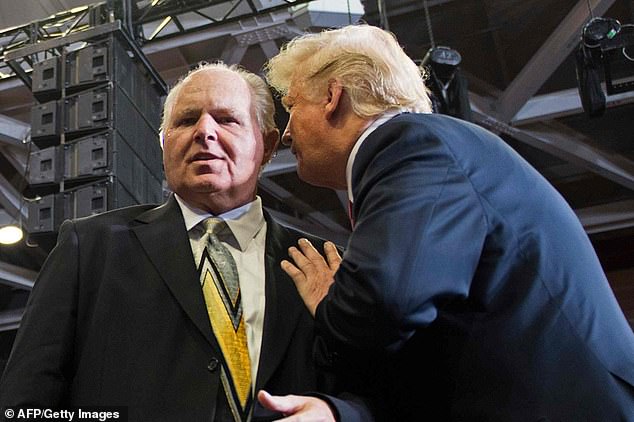 Rush Limbaugh, whose conservative talk-radio show has been a Republican mainstay for 30 years, said ‘friends’ of his heard the ‘We ant Trump’ chanting in Paris 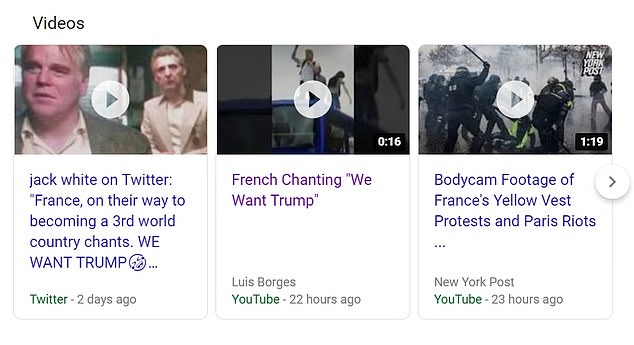 Searching Google for ‘We want Trump’ and ‘Paris’ yielded a video (center, above) described as ‘French’ protesters chanting the slogam 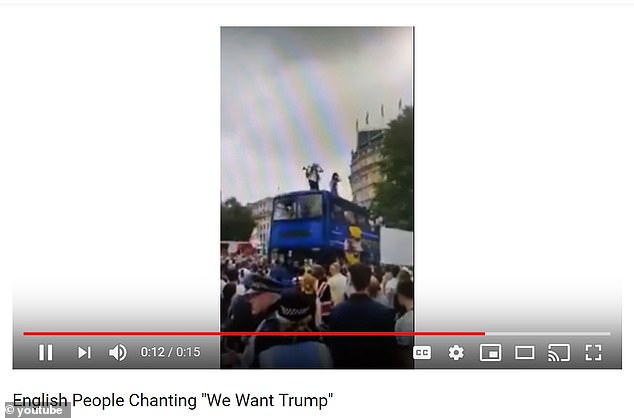 By Tuesday the video’s owner had changed the title to reflect that it was ‘English people,’ not the French; Google’s search engine had not yet caught up

So-called ‘Yellow Vest’ protesters were mostly hard-leftists who objected to Macron, whom the French see as center-right, also proposing to increase regulated electricity and natural gas prices in addition to fuel at the pump.

They take their name from the reflective high-visibility yellow vests that every French driver is expected to carry in the trunk of his or her car, in case of an emergency breakdown.

In a role-reversal from typical American protests, activists in Paris who have turned parts of the city into war zones during the past two weekends, the liberal protesters said their demonstrations will continue because they want tax reductions.

The protests spread on Tuesday as students set fire to a barricade in Bordeaux and roadside revolts springing up on highways in Aix-en-Provence and outside Paris. 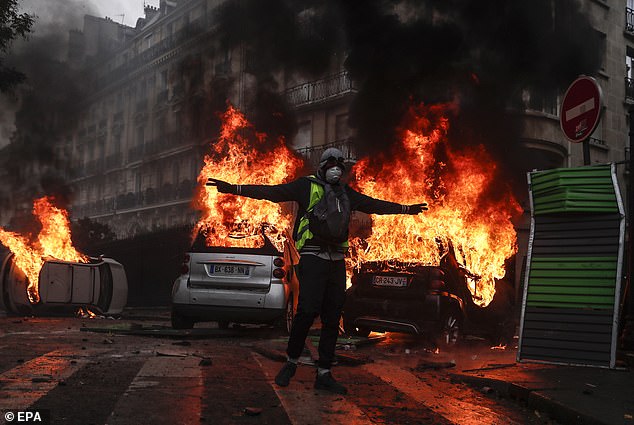 There has been no proof that rioters in France are chanting ‘We want Trump!’ 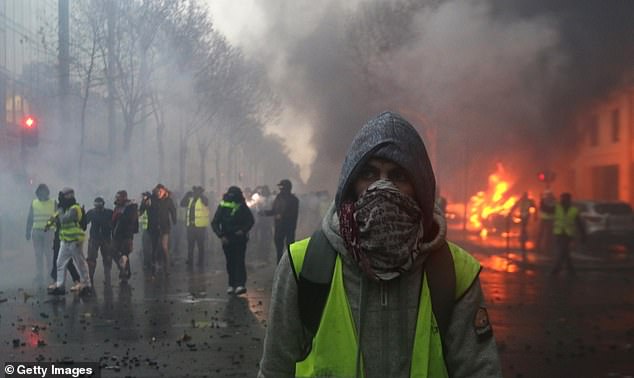 Some of the students mobilized in the demonstrations have clashed with police; they now say they want minimum wage hikes in addition to tax decreases on more than just energy 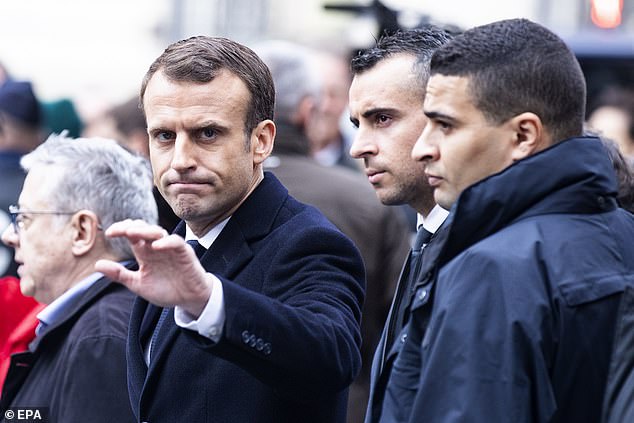 Macron’s change of heart is ‘a first step, but we don’t want crumbs,’ said Benjamin Cauchy, a spokesman for the movement.

‘Demonstrations will continue as we fight for further demands,’ Cauchy added.

In announcing the decision, Prime Minister Edouard Philippe said anyone would have ‘to be deaf or blind’ not to see or hear the roiling anger on the streets over a policy that Macron has defended as critical to combating global warming.

‘The French who have donned yellow vests want taxes to drop, and work to pay. That’s also what we want. If I didn’t manage to explain it, if the ruling majority didn’t manage to convince the French, then something must change,’ said Philippe. ‘No tax is worth jeopardising the unity of the nation.’

Trump’s passive-aggressive slap at Macron came just weeks after a war of words in Paris, where the French leader denounced the ‘selfishness of nations only looking after their own interests’ with nationalist policies like the ones his American counterpart has embraced.

‘Patriotism is the exact opposite of nationalism. Nationalism is a betrayal of patriotism by saying, “Our interests first, who cares about the others? We erase what a nation holds dearest, what gives it life, what gives it grace and what is essential – its moral values,’ he said in a speech with Trump sitting in the front row.