He and First Lady Melania went to pay their respects – but made no mention of his long-running feud with the Bush family. 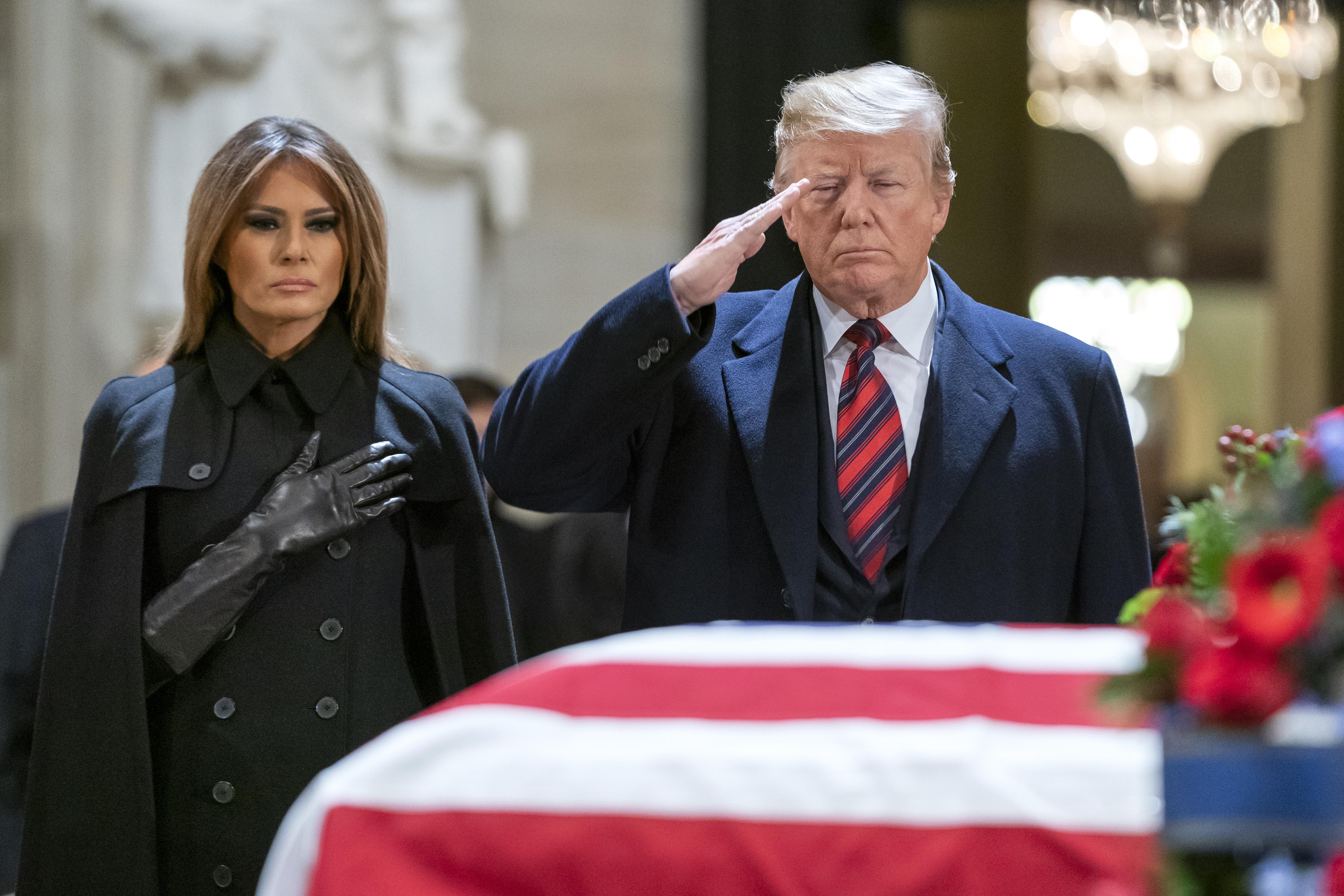 What is the Trump v Bush feud all about?

Donald Trump hailed the 41st president as a public servant of “sound judgement, common sense, and unflappable leadership” who “always found a way to set the bar higher.”

Ahead of the funeral, Mr Trump tweeted that he was "looking forward to being with the wonderful Bush family".

He also boasted Melania would be giving former First Lady Laura Bush a tour of the White House Christmas decorations.

He said: "This is not a funeral, this is a day of celebration for a great man who has led a long and distinguished life. He will be missed!" 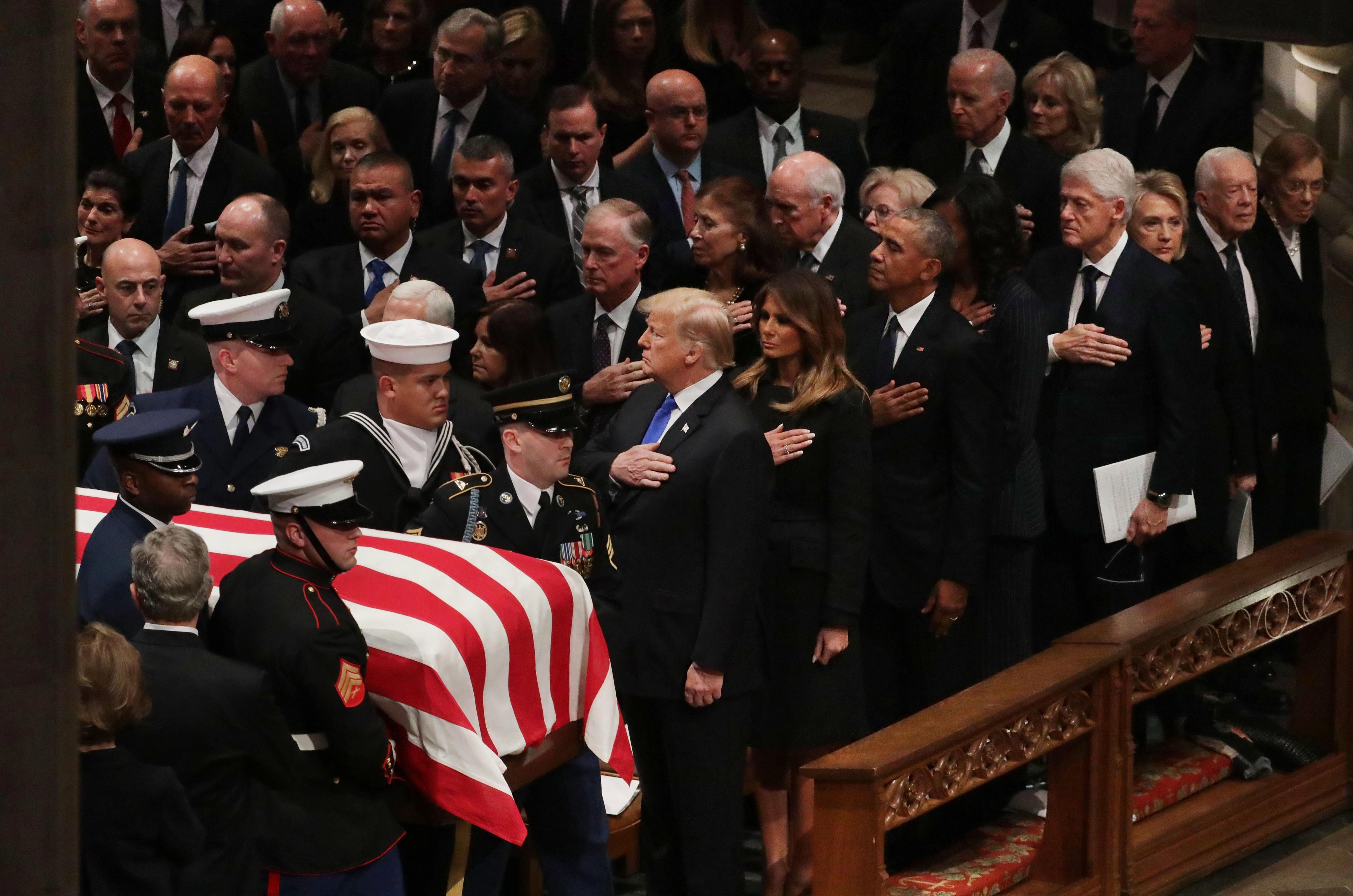 In return the Republican party royalty derided him as a "comedian" and a "blowhard" and said they voted for his Democrat rival Hillary Clinton.

George Bush Snr and Jnr have both been highly critical of Mr Trump, who defeated one-time front-runner Jeb to be named as Republican presidential candidate in 2016.

Mr Trump swerved Barabara Bush's funeral "out of respect for the family" but cannot avoid honouring a former president.

In an apparent truce, the current president has reportedly cut a deal with the Bushes to ensure there would be no criticism of him at the state funeral.

Here's our guide to the bitter war of words. 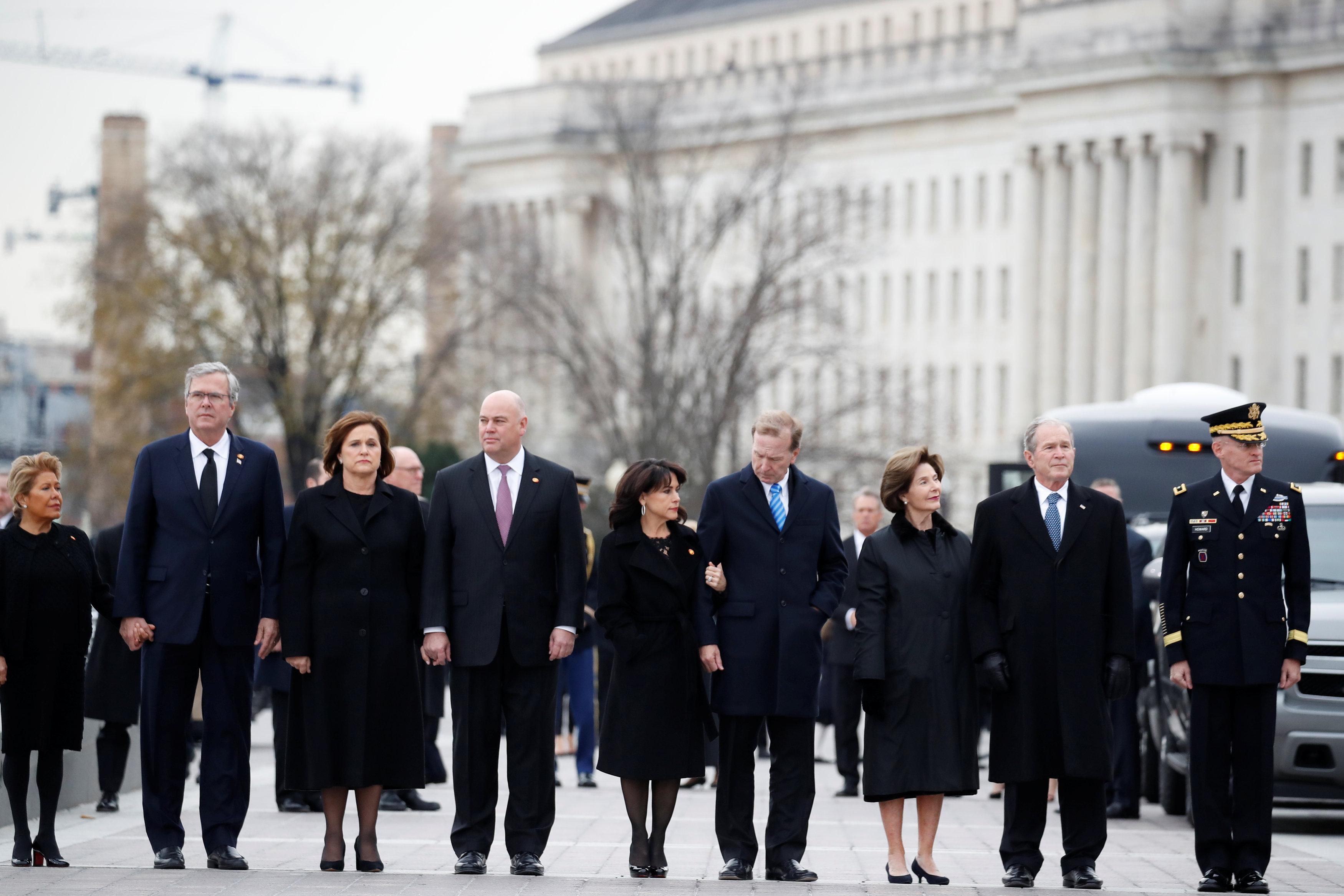 Donald Trump was rumoured to be a Democrat supporter during George W's presidency.

His public feud with the Bush dynasty dates back to at least April 2013.

George W's brother Jeb, a former governor of Florida, was already being lined up as front-runner for the presidential race three years ahead.

If he won it would have meant three Republican presidents in a row with the same surname.

Mr Trump, then a mere reality TV star and birther conspiracist, tweeted: “We need another Bush in office about as much as we need Obama to have a 3rd term.

He went on the attack again in August 2015, tweeting: “Enough is Enough – no more Bushes!”

He linked to an Instagram video depicting what he hoped to portray as gaffes by Jeb and his brother and father. 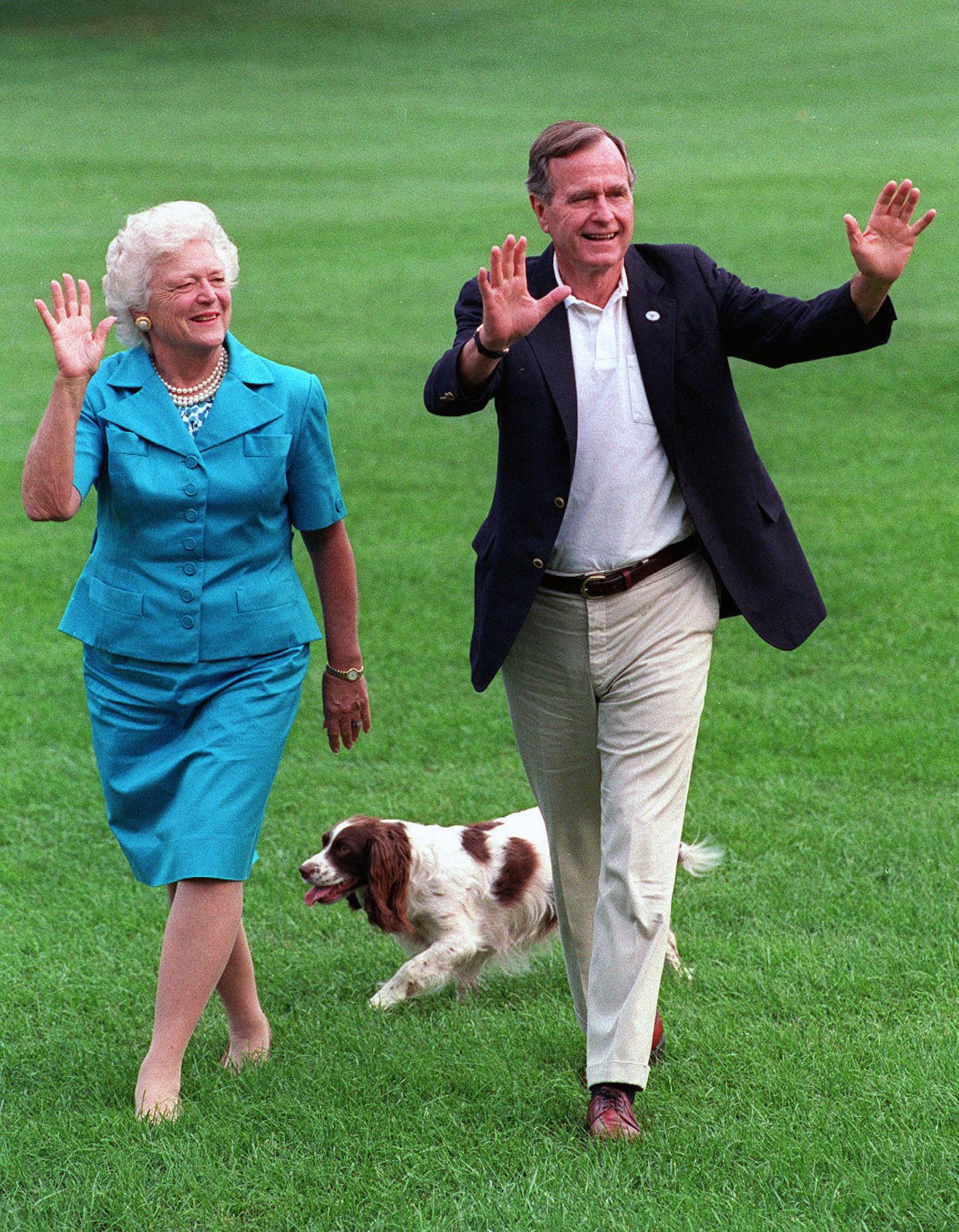 Former First Lady Barbara Bush, mother of Jeb and George W, made her views on the unlikely Republican candidate very clear in February 2016.

Barbara, who died in April, likened the Apprentice host to a “comedian” and a “showman”.

She also made reference to Mr Trump's disparaging remarks about Fox News TV anchor Megyn Kelly after a debate.

Unimpressed, Mrs Bush told CBS news: “I don’t know how women can vote for someone who said what he said about Megyn Kelly.

In a separate interview with CNN, Mrs Bush said: "I'm sick of him.

"He doesn't give many answers to how he would solve problems. He sort of makes faces and says insulting things. 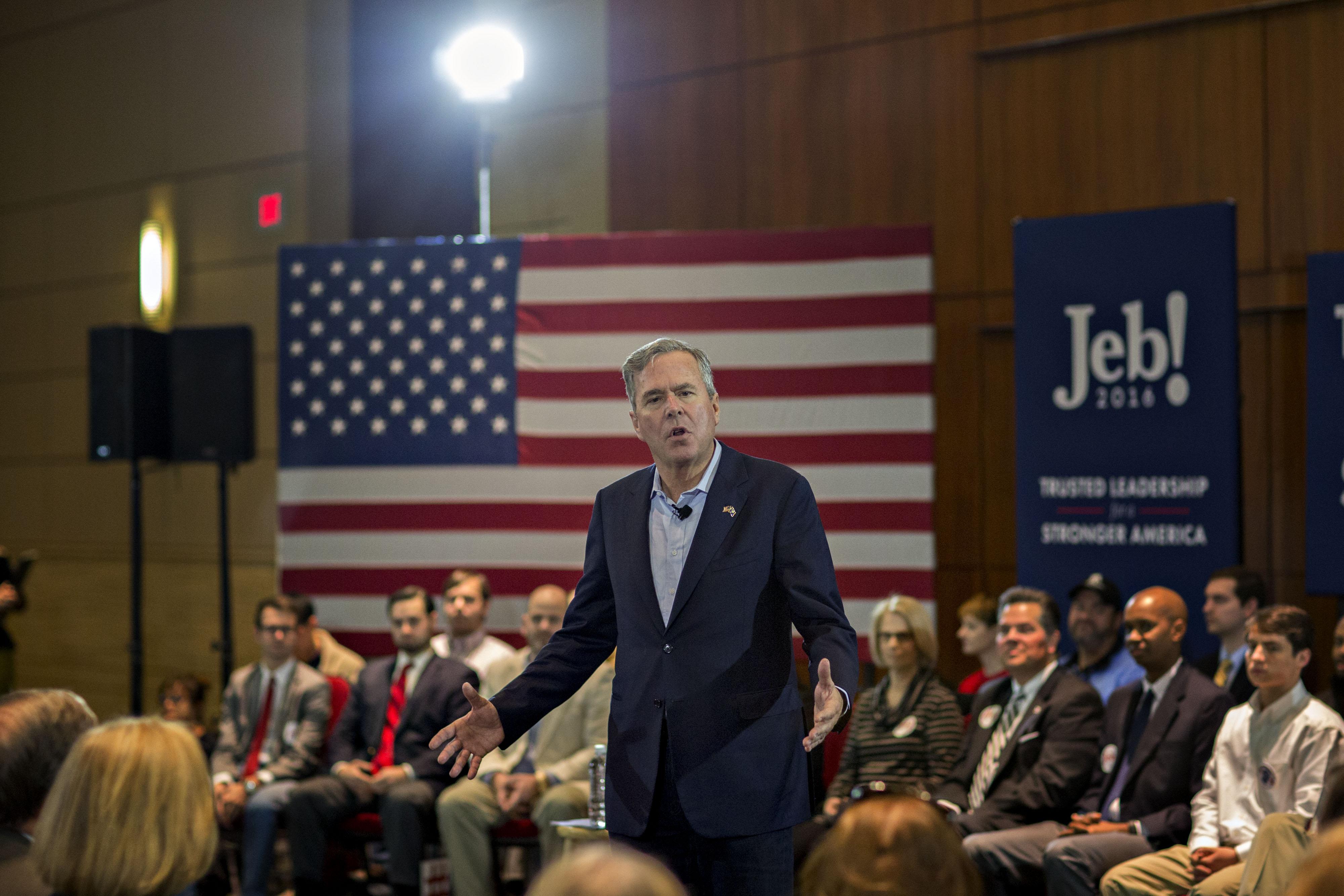 Trump's surprise campaign was notable for the lurid nicknames he gave to his rivals, especially those in his own party.

One that did the most damage was "low energy Jeb".

The moniker dogged Jeb throughout the primary campaign and he slipped back from favourite to also-ran.

Jeb pulled out of the race in February 2016.

During the campaign, Mr Trump also frequently criticised George W's decision to go to war in Iraq in 2003, which he called a "big fat mistake".

Eight years earlier Mr Trump had said it “would have been a wonderful thing” if Democrats in Congress had impeached Bush over the war.

George W Bush criticised Mr Trump during the 2016 election campaign and reportedly said he would vote for Hillary – an extraordinary admission for a senior Republican.

His wife Laura also hinted she would like to see Mrs Clinton in the White House.

A spokesman later said Mr and Mrs Bush did not vote for either candidate.

They were both in attendance to see the "peaceful transfer of power" at Mr Trump's inauguration as 45th president in January 2017.

Mr Bush's appearance was most notable at the time for photographs of him wrestling with a poncho when it started raining.

But it turned out the ex-president was even more bemused by what he saw on the podium. 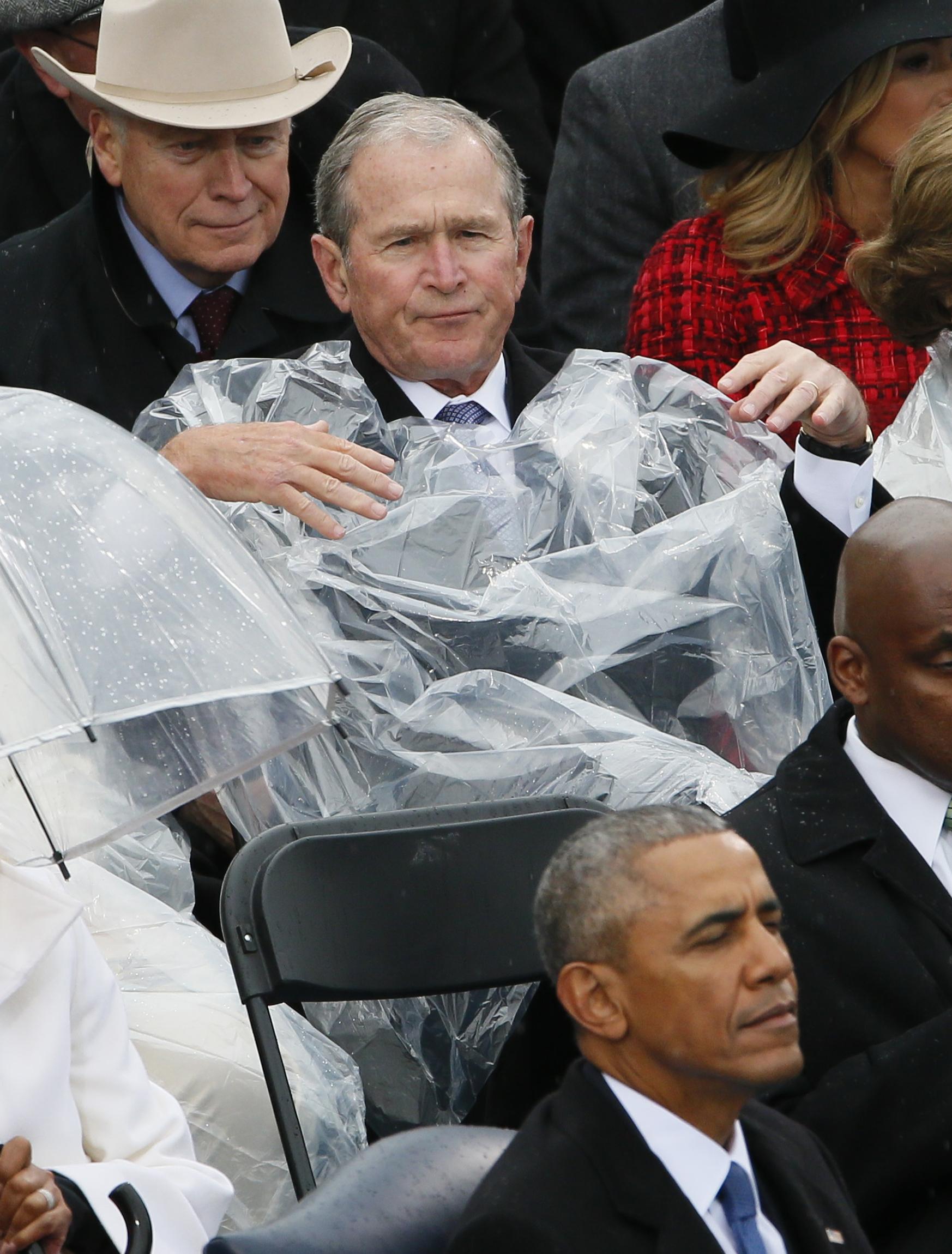 George W gave a speech in October 2017 which was seen as a thinly veiled attack on the current occupant of the White House, although he did not name him.

Ex-presidents conventionally refrain from commenting on their successors and stay above the fray of day-to-day politics.

But Mr Trump had been accused of encouraging white supremacists and came under intense fire for failing to condemn racist thugs at a rally in Charlottesville.

In pointed remarks at Mr Trump's "America first" policies, Mr Bush denounced “bigotry” in any form as “blasphemy against the American creed.”

He said at the Spirit of Liberty event in New York: “We’ve seen nationalism distorted into nativism, forgotten the dynamism that immigration has always brought to America.

"We’ve seen the return of isolationist sentiments, forgetting that American security is directly threatened by the chaos and despair of distant places.”

He also lamented that “our discourse (is) degraded by casual cruelty”.

Asked afterwards if he thought his message would reach the White House, Mr Bush reportedly smiled and said: "I think it will."

Blowing in the wind

The following month, George Bush senior was even clearer in his message.

The Republican grandee reportedly revealed he had voted for Hillary, and dismissed Mr Trump as a "blowhard".

The word is slang for a pompous and arrogant braggart.

His insult was reported in a book by historian Mark Updegrove.

He quoted Mr Bush as saying of Trump: "I don't like him. I don't know much about him, but I know he's a blowhard.

"And I'm not too excited about him being a leader."

A White House official hit back: "If one presidential candidate can disassemble a political party, it speaks volumes about how strong a legacy its past two presidents really had." 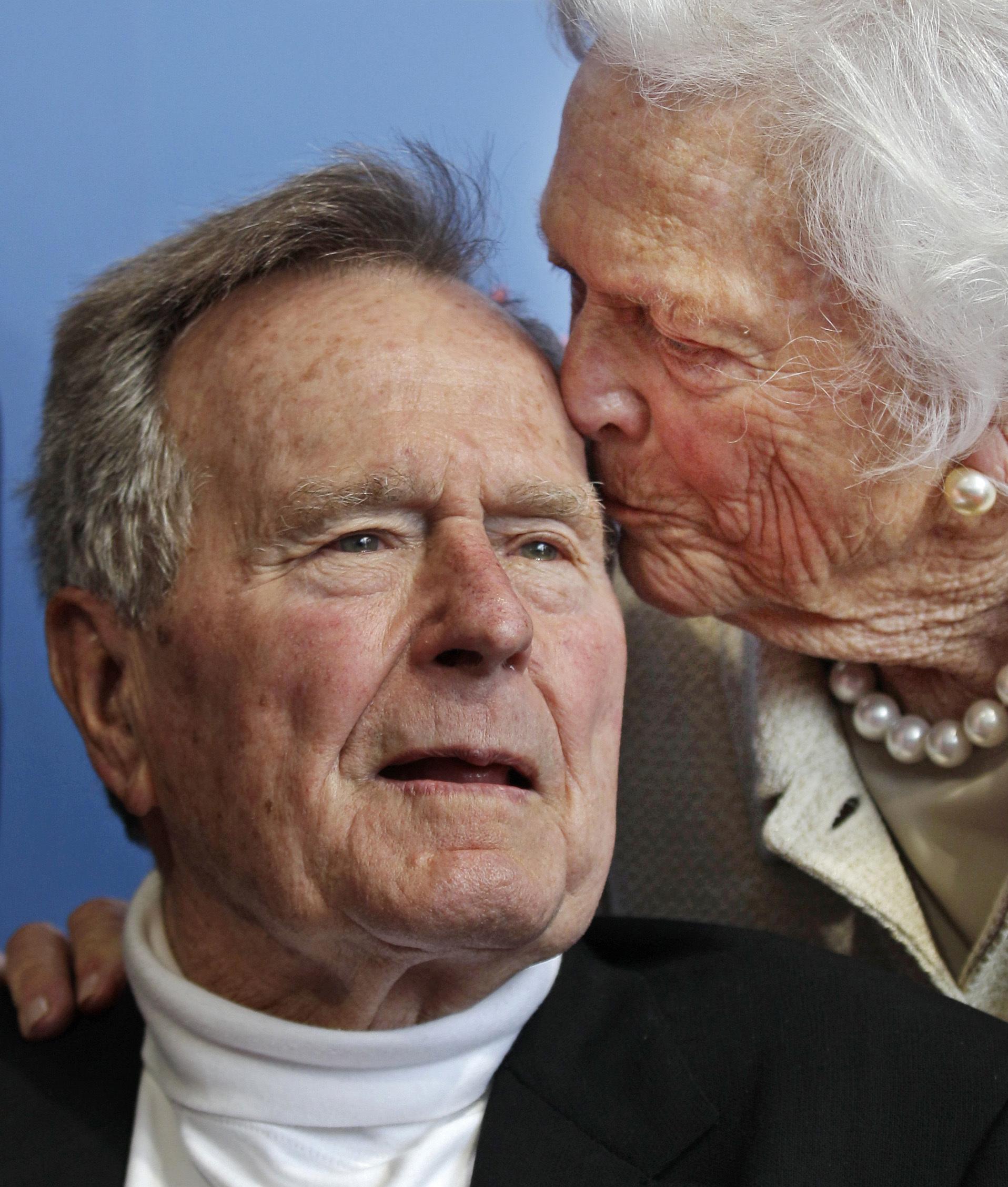 Two months after Barbara Bush died, Mr Trump stoked the feud again by bragging he had beaten the “Bush Dynasty”.

He went on the attack as he reeled from the ongoing probe into his campaign's links to Russia.

Mr Trump tweeted: "I’ve had to beat 17 very talented people including the Bush Dynasty, then I had to beat the Clinton Dynasty, and now I have to beat a phony Witch Hunt and all of the dishonest people covered in the IG Report…and never forget the Fake News Media.

He was reacting to a report by the Justice Department’s inspector general, saying the FBI’s handling of the Hillary Clinton email investigation was not influenced by political bias.

“And now, I guess hopefully, I’m in the process of beating very dishonest intelligence.”

In July 2018, Mr Trump made a mocking reference to "a thousand points of light" at a rally in Montana.

It was a favourite slogan used by George H.W. Bush, who said it in his inauguration address in 1989.

He also used it in other speeches to describe community and volunteer organisations.

Mr Trump told cheering supporters: "Thousand points of light, I never quite got that one.

"What the hell is that? Has anyone ever figured that one out? And it was put out by a Republican, wasn't it?"

After his death, Mr Trump used the same phrase in praise of the ex-president.

He said in a statement: "Through his essential authenticity, disarming wit, and unwavering commitment to faith, family, and country, President Bush inspired generations of his fellow Americans to public service – to be, in his words, 'a thousand points of light' illuminating the greatness, hope, and opportunity of America to the world."

He and Melania added in another tribute: "Along with his full life of service to country, we will remember President Bush for his devotion to family – especially the love of his life, Barbara.

"His example lives on, and will continue to stir future Americans to pursue a greater cause."