Incident in the West Bank comes amid ‘100 days of rage’ protests by Palestinians against Trump’s Jerusalem embassy move. 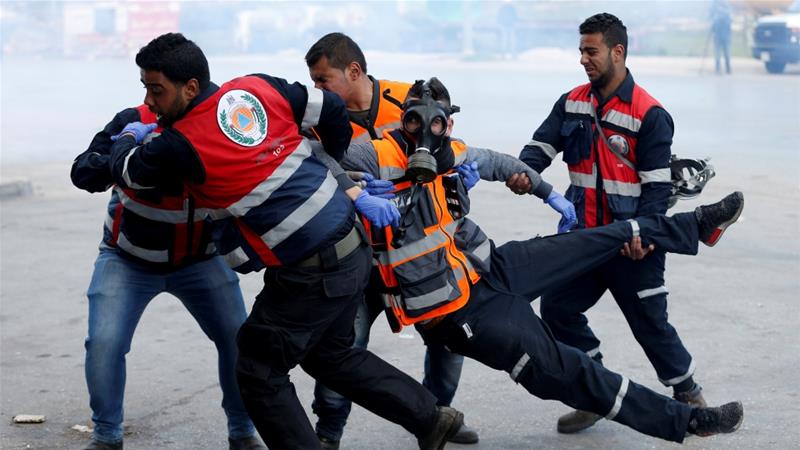 Two Israeli soldiers have been killed in a car attack near the town of Yabed in Jenin in the occupied West Bank in Palestine, according to Israeli media reports.

Friday’s incident happened as clashes between Palestinians and Israeli security forces erupted in various places in the occupied West Bank.

Two other people were injured in the attack, one of whom was in critical condition, according to reports.

The Jerusalem Post website said the suspected driver of the car, who had escaped from the scene, was reportedly captured by Israeli security forces and was lightly injured.

The Israeli military said on Twitter the suspect, 26-year-old Alaa Rattab-a-Latif Kabha, had been taken to a hospital and was being questioned.

It later added it would suspend the work permit of the suspect’s “entire” family.

This could amount to the cancellation of 67 work and 26 commerce permits.

Avigdor Lieberman, Israel’s defence minister, called for the death penalty to be applied to Kabha and accused the Palestinian Authority of being behind Friday’s incident.

“We will act to ensure that the terrorist will receive the death penalty, demolish his house and punish all those who collaborated with him,” he said.

“There is no such thing as individual terrorism, this terrorism is supported by Mahmoud Abbas and the Palestinian Authority which provides money to the families of terrorists.”

Following the car-ramming attack adjacent to the community of Mevo Dotan, the Coordinator of the Government Activities in the Territories, Maj, Gen. Yoav (Poli) Mordechai, ordered an immediate and broad suspension on permits for the entire family of the assailant

The Jerusalem Post report quoted Hazem Qassem, a Hamas spokesperson, as saying “this attack makes it clear that the Intifada is continuing for the Palestinian people”.

Elsewhere in the occupied territories, demonstrations were held to commemorate 100 days of rage since US President Donald Trump’s declaration of Jerusalem as the capital of Israel and announcement of the move of the US embassy from Tel Aviv to Jerusalem.

Protests have continued in the occupied Palestinian territories every Friday since Trump’s Jerusalem move.

The Palestinian leadership maintains that East Jerusalem must become the capital of a future Palestinian state in any future peace agreement with Israel, while Israel considers the whole of Jerusalem to be part of its territory.

Israel occupied and subsequently annexed East Jerusalem in 1967 in a move that was not recognised by the international community.

At least 27 Palestinians have been killed since Trump’s decision three months ago, most were shot and killed during clashes with Israeli forces.

Palestinians in the occupied territory have lived under Israeli military rule for more than half a century.

To enter Jerusalem, Palestinians must apply for Israeli-issued permits.

Many Palestinians, owing to Israel’s security restrictions, are banned from entering Jerusalem.

Trump’s decision is seen as another blow to the dwindling hope among Palestinians for any prospects for an independent state.