One of America's most senior military commanders has used a visit to Sydney to lash Beijing for “pernicious” and “malign” behaviour in the Indo-Pacific, warning that China’s goal is to reshape the region's “way of life”.

Admiral Philip Davidson, the head of the powerful US Indo-Pacific command, accused China of using “coercion, influence operations, and military and diplomatic threats to bully other states into accommodating [its] … interests.” 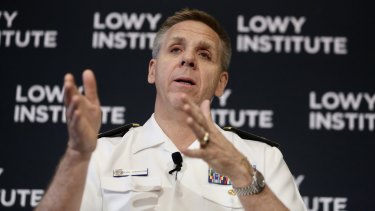 Admiral Philip Davidson, head of the US Indo-Pacific command, speaks at the Lowy Institute in Sydney on Thursday.Credit:Peter Morris, Sydney Heads

“In pursuit of their vision, the Communist Party of China employs a whole-of-government approach, using political, economic and military tools as well as a vast propaganda machine to … reshape [regional] relationships,” he told the Lowy Institute on Thursday.

“This is a competition between a Beijing-centric order and a free and open Indo-Pacific.”

Admiral Davidson warned that Beijing's aim was a system where “the strong do what they will and the weak do what they must”.

"Through excessive territorial claims, debt-trap diplomacy, violations of international agreements, theft of intellectual property, military intimidation and outright corruption, the Communist Party of China seeks to control the flow of trade, finance, communications, politics and the way of life throughout the Indo-Pacific where nearly two thirds of the world's population will live in 15 years."

He cited as an example of “intimidation” the go-slow imposed “at various points” on Australian exports moving through Chinese ports, though he did not pinpoint specific events.

“Beijing has shown a willingness to intervene in free markets and to hurt Australian companies simply because the Australian government has exercised its sovereign right to protect its national security,” Admiral Davidson said.

But he said the “good news” was that much of the region was now “wise to these matters” and “calling for advice when it comes to dealing with the Communist Party of China’s intrigues”.

Admiral Davidson said Washington did not seek conflict with China nor to “decouple” America’s economy from China". Nor did the US want to see China weakened by the ongoing coronavirus (Covid-19) crisis, saying “a very unstable China is not good for anyone”.

"But as the Communist Party of China’s malign influence expands globally I want to be clear that the alliance between the US and Australia will be even more critical.”

Admiral Davidson acknowledged that climate change was a concern for his command,  given the region was “more prone to natural disasters than any other region on the planet”.

“When I see my peers, particularly those in the Pacific Island chain, I always ask them ‘can you see the effects of climate change in your own observations of your life here on the islands going back to when you were young?’ And they can all really articulate … changes to their lifestyle as a result of climate change.”

He also warned that a move by Philippines President Rodrigo Duterte this week to scrap a visiting forces agreement with the US could “challenge” America’s ability to help Manila’s battle against Islamic extremism in the country’s south.