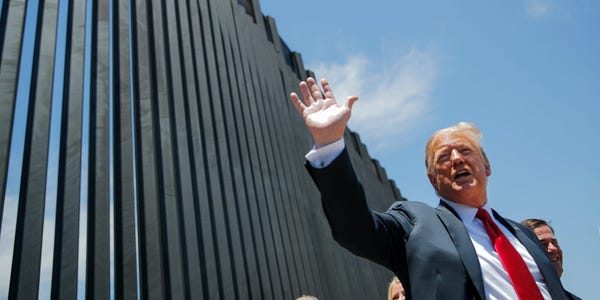 Contractors who are replacing the border wall in Arizona are dumping leftover debris in Mexico, where scrap metal dealers are profiting off the pieces, witnesses told local television stations KOB4 and CBS 5.

The witnesses — an ecologist who works in the desert region in Southern Arizona and people selling the metal online — told CBS 5 that the contractors are essentially giving away the old wall.

"There were DHS and Army Corps of Engineers officials, standing there watching their contractors with a bulldozer and front-end loaders push the scrap metal onto the Mexican side," Gary Nabhan, a desert ecologist, told the station. "And Mexican scrap metal scavengers were coming right up to the border."

Long before his presidency, President Donald Trump had made the construction of a wall along the border with Mexico his keystone issue. The wall, if finished, will end up costing American taxpayers tens of billions of dollars.

Nabhan told KOB4 that he believed that dumping the old wall for anyone to haul away in Sonoyta, Mexico, is both a taxpayer waste and environmentally concerning.

"All of that metal and concrete should have been carried away to Phoenix or Tucson where there's legal disposal sites or recycling centers – none of it should have been pushed into Mexico," Nabhan said.

CBS5 first learned of the scrap metal dumping after discovering an ad online for "Steel For Sale Arizona," the station reported.

"We have an amazing amount of steel left over from the border (sp) wall Trump built. Government-issued steel for sale," the ad said, according to CBS5. "They are basically giving it away,"

When a producer reached the seller, he said that the posts were going for $50 each, or $800 for a truckload and that steel came from the border wall project near Naco, Arizona.

The station reported that Southwest Valley Constructors is the company that won the contract to erect the border fence near Naco and appears to be the source of steel posts being collected in Sonoyta, Mexico, as well.

Improperly disposing of the debris in Mexico could be a legal issue, the station reported.

Customs and Border Protection is investigating, a spokesperson told CBS5.

"CBP is aware of the allegation. The allegation involves a subcontractor working on behalf of the construction contractor," a spokesperson told the outlet. "CBP is in the process of investigating the allegation, and due to the ongoing investigation, CBP can't comment further."