The Victorian Liberal opposition has asked the state's corruption watchdog and the Auditor-General to probe the $2.3 billion contract to deliver Melbourne's new train fleet owing to probity concerns and lengthy delays.

The Liberal request came on the same day Premier Daniel Andrews partly addressed concerns the Chinese company building the trains posed a national security risk and benefited from exploited Uighur labour by saying "we are about getting things done". 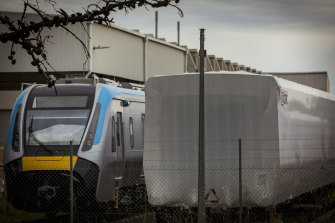 Opposition public transport spokesman David Davies has written to the bodies requesting they investigate the 2016 deal to build 65 high-capacity metro trains (HCMT). The trains – to be delivered by a consortium that includes Chinese state-owned firm CRRC Changchun Railway Vehicles, Downer EDI and Plenary Group – are 18 months late and the government does not have a completion date.

"Labor and Transport Infrastructure Minister Jacinta Allan have botched the HCMT project from the start. It is now two years late and the Chinese-manufactured trains are still not running," Mr Davis said. "Only the Auditor-General has the power to pull back the veil on Labor's mismanagement and its cost to commuters."

Mr Davis has referred the HCMT deal to the Independent Broad-based Anti-corruption Commission following reporting in The Age exposing potential probity issues related to the tender process. A top official involved in the procurement of the trains was hired by the Victorian government in 2015 after recently working for Downer, a co-bidder with CRRC. Months after the contract was awarded, the worker took up a senior position at Downer. The official has not been named for legal reasons.

"Given [the official] successfully transitioned from their executive position with [the Transport Department] to a senior, and one can presume lucrative, position with one of the successful consortium members warrants an examination by IBAC – more specifically the 'probity and transparency' aspect of the process," Mr Davis wrote in a letter to IBAC.

A Department of Transport spokesperson said "there is no conflict of interest regarding the former employee".

"[The individual] joined Downer in July 2017 to work on a NSW project and has never been involved with the High Capacity Metro Trains project at Downer."

On Tuesday, Mr Andrews addressed concerns about human rights abuses linked to CRRC, which has also done significant work for the NSW state government for more than a decade, but which was named by the Australian Strategic Policy Institute in March as a beneficiary of Uighur labour through one of its Chinese suppliers.

Mr Andrews said the government accepted assurances from the company that it was not exploiting workers from the country's Uighur minority on the train project. It's estimated more than a million Uighurs have been sent to "re-education" camps that have been likened to concentration camps by some human rights groups.

"We don't agree with everything that is done in every country around the world but ultimately we are about getting things done," Mr Andrews said, emphasising the jobs created in regional areas as a result of the project. "We have sought assurances that it is not an accurate statement in relation to the work we have contracted them to do and have received those assurances."

Asked about what the assurances specifically entailed, Mr Andrews said: "I'd need to come back to you on the exact details of that, it is some time ago, but I would be happy to follow that up."

In June, the US Defence Department placed CRRC on a list of Chinese companies, including Huawei, with close ties to the Chinese government or military that can be subject to emergency economic powers and sanctions by the US President.

Mr Andrews said it was not the job of the state government to determine whether CRRC posed a national security threat and questioned the basis of the US targeting CRRC.

"If those judgments are to be made, they should be made by [Australian] security agencies, not by the US government … They have made some choice, I don't know what the basis of that decision is," he said.

"I don't do national security reviews. They are done by national security agencies. No one's raised any questions about this company with us. If that were to change then we would take the appropriate action but [that is a hypothetical situation]." 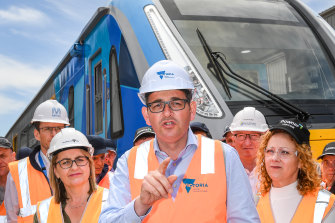 Mr Andrews and Ms Allan (left) at the announcement of the train project in 2016.Credit:Justin McManus

The consortium is required to use 60 per cent local content, but unions are sceptical this target will be met after work originally slated to be completed in Melbourne was sent offshore to CRRC’s factory in China. Mr Andrews also pointed to the NSW government's relationship with CRRC as evidence of the firm's Australian bona fides.

In 2006, NSW awarded a $3.6 billion contract to a consortium including a company that merged into CRRC. The Waratah trains were delivered years late and $550 million over budget. In 2016, the Baird government exercised an option in the initial contract to purchase 24 additional Waratah double-deckers at a cost of $1.7 billion.