HUNDREDS of thousands of Muslim refugees have been fleeing from Myanmar amid brutal state persecution over the past few years.

But who are the Rohingya, what has Aung San Suu Kyi said — and what is happening in Myanmar? 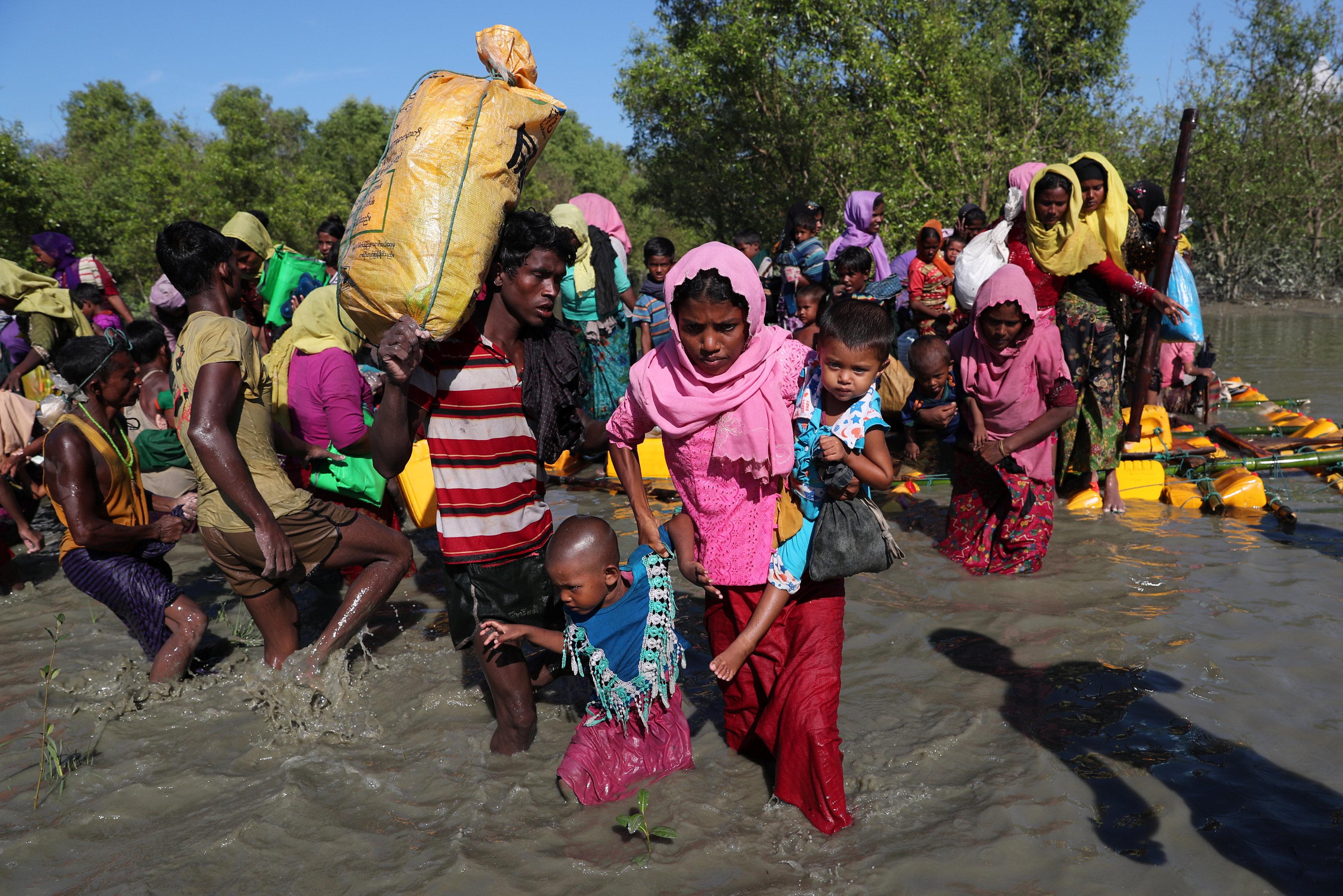 What is the Rohingya crisis?

Rohingya Muslims are an ethnic group that make up a large minority of the population of Myanmar, also known as Burma.

They have been consistently and systematically persecuted over the years of a military dictatorship in the former British colony from 1962-2015, when democratic activist and longtime political prisoner Aung San Suu Kyi became the defacto head of state.

Since taking office, further large waves of desperate Rohingya refugees have been fleeing the predominantly Buddhist country amid reports of state persecution and violence.

Whole villages have been burned down and families driven from their homes. 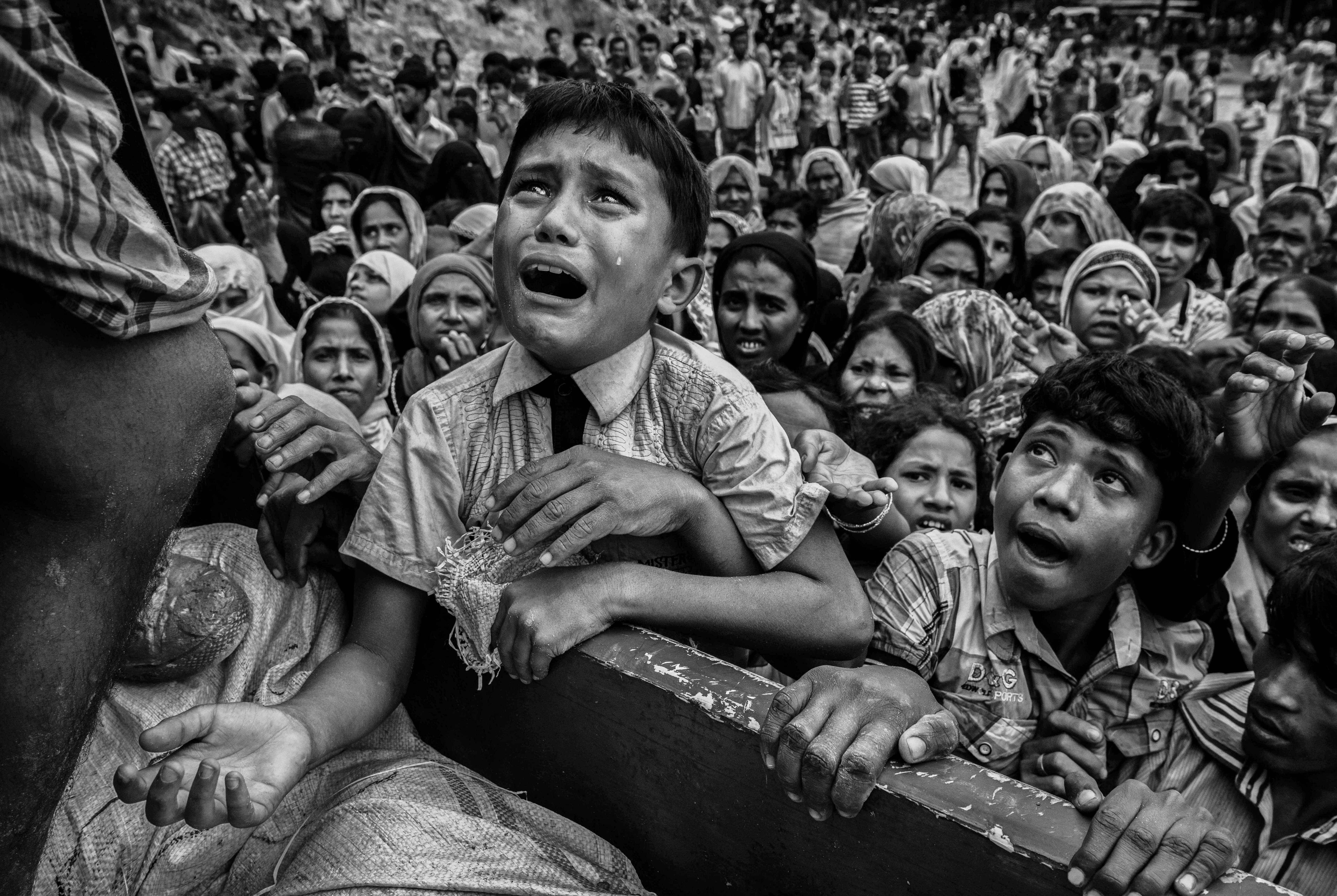 Rohingya have been classed as illegal immigrants in the country and have been denied civil rights.

Their treatment has been described by the UN as "a textbook example of ethnic cleansing".

The mass exodus was sparked by a brutal crackdown after Rohingya militants attacked police posts.

Amnesty International said that in response, Rohingya were subjected to a "targeted campaign of widespread and systematic murder, rape and burning".

There are now thought to be nearly a million Rohingya refugees who have fled to neighbouring Bangladesh — and more than 1,000 are thought to have been killed.

The UK said in May 2018 it would pledge £70million in aid ahead of the monsoon season, which is part of £129m in contributions the UK has made since August 2017 and will focus on providing materials to strengthen their shelters and help with food and water as well as healthcare services. 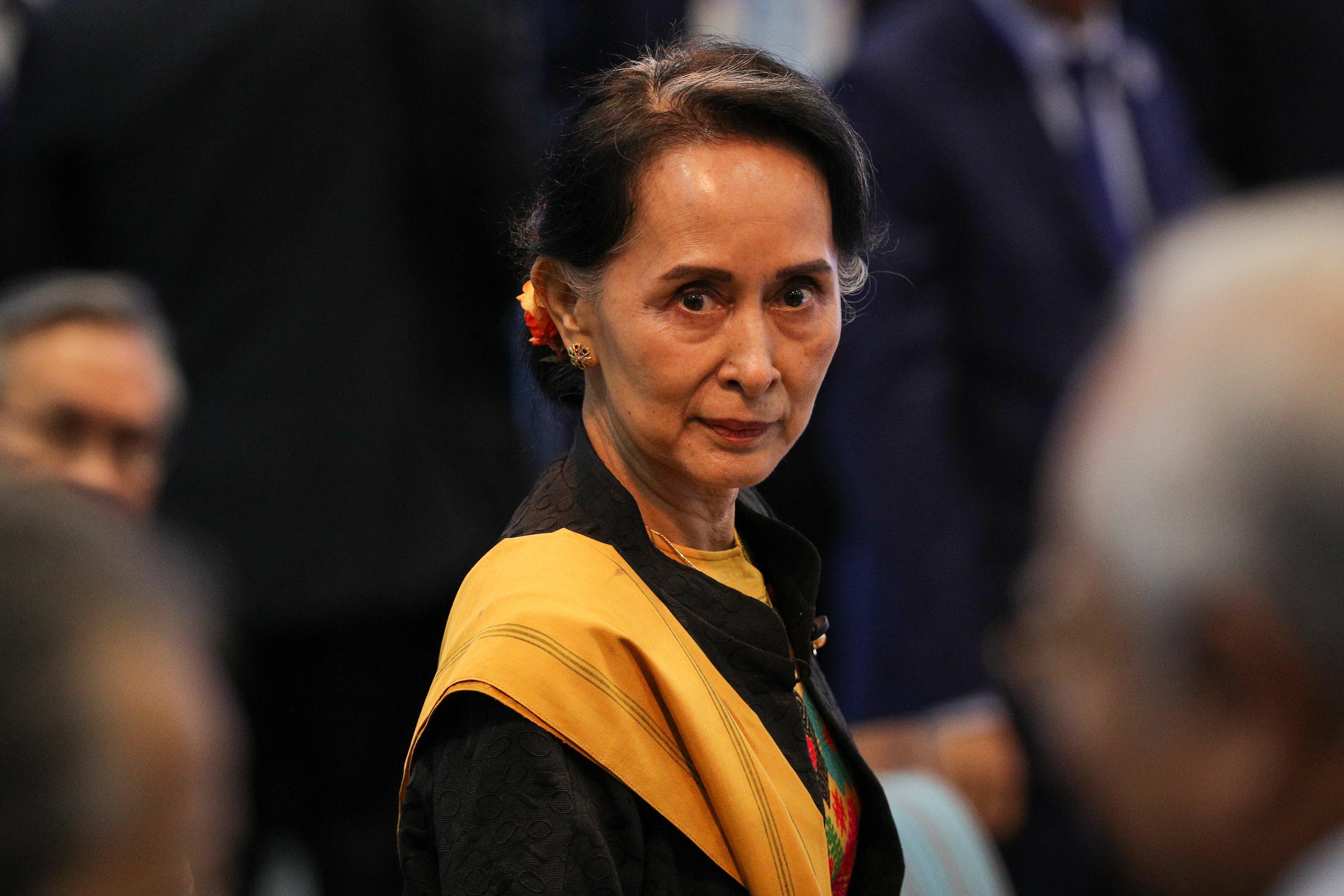 What has Aung San Suu Kyi said about the crisis?

Aung San Suu Kyi won the Nobel Peace Prize in 1991 and had been hailed as the saviour of Myanmar after decades of repressive military rule.

An Oxford graduate, she was feted in the West and given dozens of awards and accolades in solidarity with her campaign for democracy while she was under house arrest for much of the time between 1989 and 2010.

But she was finally given power after the 2015 elections which saw her National League For Democracy party win 86 per cent of the parliamentary seats.

Although she was prohibited from becoming President under the constitution because of her foreign-born husband and children, the new role of State Counsellor, effectively Prime Minister, was created for her.

But despite her lifelong pro-Democracy campaigning, she failed to condemn violence against the million-strong Rohingya population.

Aung San Suu Kyi was condemned by world leaders and UN officials who accused her of turning a blind eye to the blooodshed, and there were calls for her to lose her Nobel Peace Prize.

In October 2017, Oxford City Council voted to strip her of the Freedom of the City, which she was granted in 1997.

Bob Geldof handed back his Freedom of the City of Dublin in protest against Suu Kyi, who also held the award.

He said he did not "wish to be associated in any way with an individual currently engaged in the mass ethnic cleansing of the Rohingya people of north west Burma". 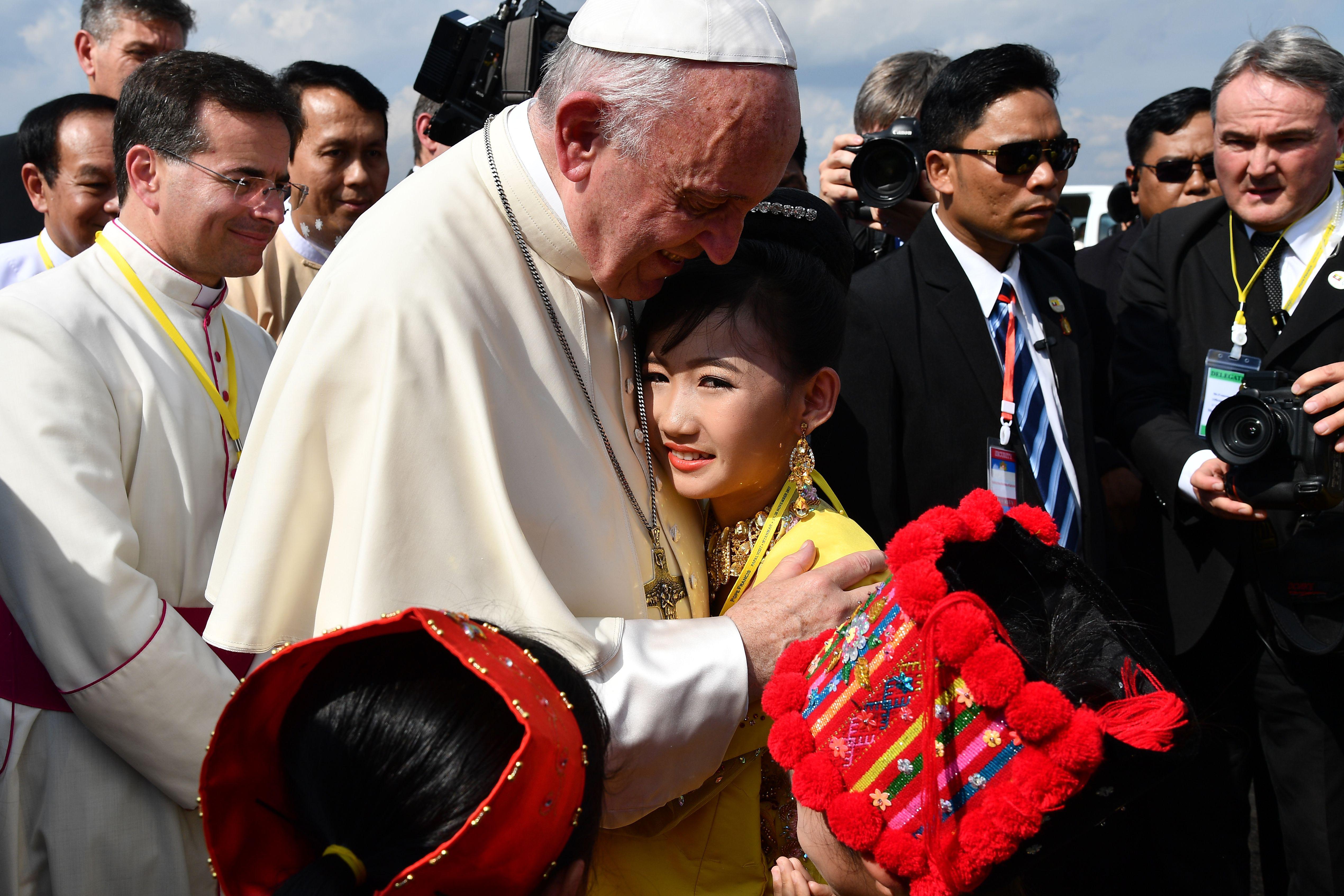 What did Pope Francis say in his speech after meeting Aung San Suu Kyi?

Pope Francis landed in Yangon for a three-day visit to Myanmar in November 2017.

Thousands of locals welcomed the head of the Catholic church as he landed in the city.

The Pontiff failed to mention Myanmar's Rohingya minority in a speech alongside the country's civilian leader.

Speaking in the capital Naypyidaw the following day, he urged people to “respect the rights of all who call this land their home”.

Francis added: "The future of Myanmar must be peace, a peace based on respect of the dignity and rights of each member of society, respect for each ethnic group and its identity.

"Religious differences need not be a source of division and distrust, but rather a force for unity, forgiveness, tolerance and wise nation-building.”

Some papal advisers warned him against saying the word "Rohingya", and his omission of the word in Burma caused controversy.

But in a speech days later in Bangladesh the Pope directly addressed the persecuted minority.

"The presence of God today is also called Rohingya," the Pope said to a crowd in the capital Dhaka. 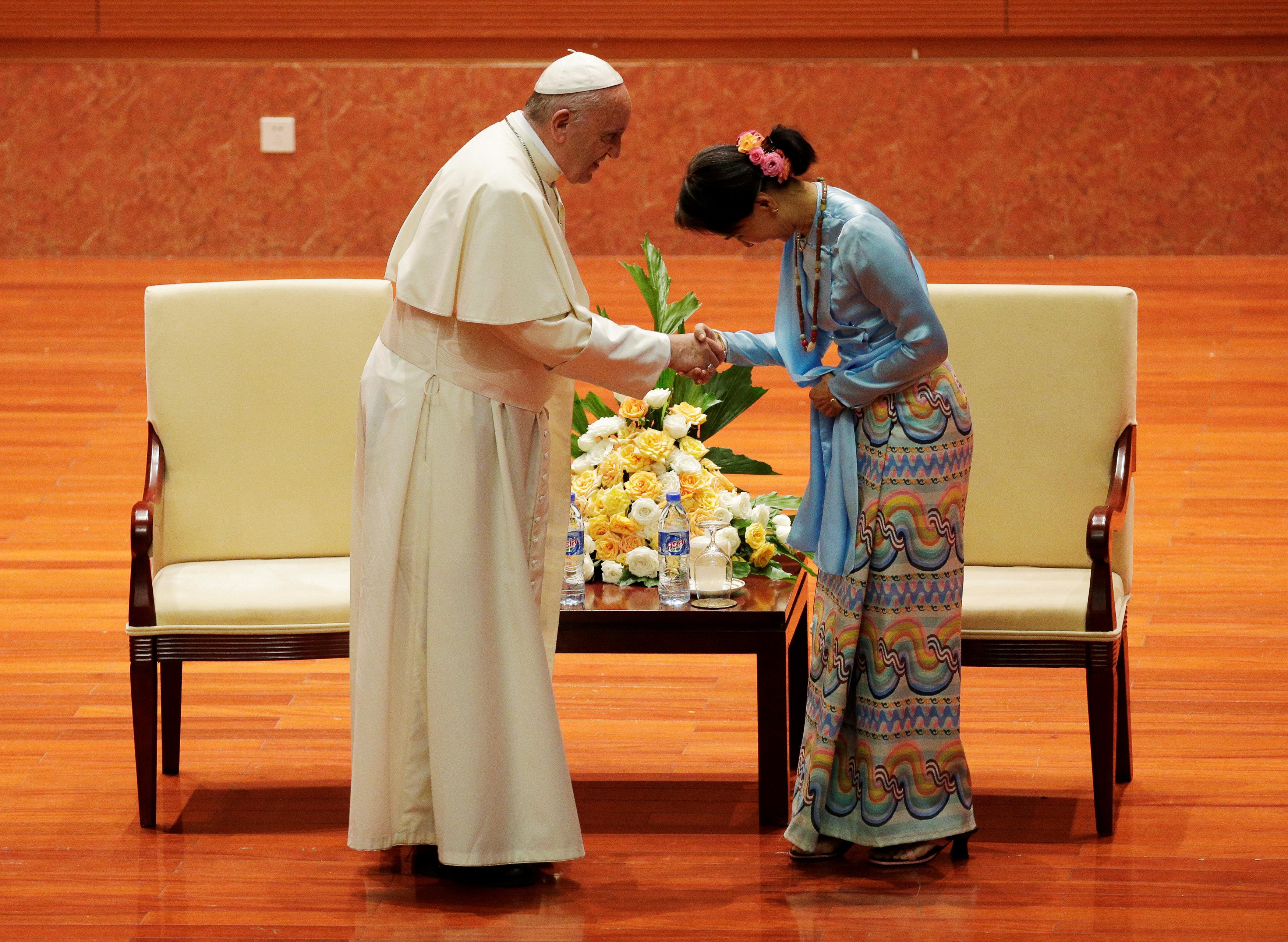 What was said on the anniversary of the crisis?

More than 130 MPs from across south east Asia called for Myanmar to be investigated by the International Criminal Court on the anniversary of the crisis.

The group, Asean Parliamentarians for Human Right, released a statement on August 24, 2018, saying Myanmar officials and military should be "brought to justice".

The statement added: "As Myanmar is clearly both unwilling and unable to investigate itself, we are now at a stage where the international community must step in to ensure accountability.”

Why were two Reuters journalists jailed?

On September 3, 2018, two journalists working for the Reuters newswire were jailed in Myanmar for seven years.

The court found them guilty of violating a state secrets act while investigating violence against the Rohingya minority.

Wa Lone and Kyaw Soe Oo, both Myanmar citizens, were arrested while carrying official documents they had just received from police officers.

The pair maintain their innocence, claiming they have been set up by the police.

The case has been widely seen as a test of press freedom in Myanmar.

The two men, aged 32 and 28, had been collecting evidence about the murders of 10 Rohingya men by the army in the village of Inn Din in northern Rakhine in September 2017.

However, they were arrested before the report's publication, shortly after being handed documents by two policemen they met at the restaurant for the first time.

A police witness testified during the trial that the restaurant meeting was a set-up to entrap the journalists.

The final report was considered an extraordinary accomplishment as it contained dozens of testimonies and confessions of crimes against the Rohingya Muslims, with accounts from paramilitary police directly implicating the military.

The Reuters findings were in direct contrast to the military's own investigation in which it exonerated itself of all crimes.