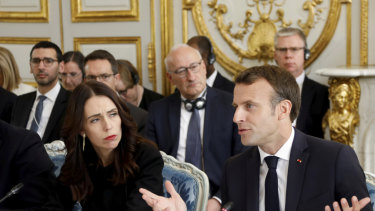 The "Christchurch Call," unveiled at an international gathering in Paris, commits foreign countries and tech giants to be more vigilant about the spread of hate on Facebook and posted afterward on other social media. It reflects heightened global frustrations with the inability of Facebook, Google and Twitter to restrain hateful posts, photos and videos that have spawned real-world violence.

Leaders from across the globe pledged to counter online extremism, including through new regulation, and to "encourage media outlets to apply ethical standards when depicting terrorist events online."

Companies including Facebook, Google and Twitter, meanwhile, said they'd work more closely to ensure their sites don't become conduits for terrorism. They also committed to accelerated research and information sharing with governments in the wake of recent terrorist attacks.

Facebook, Google and Twitter struggled to take down copies of the violent Christchurch mosque attack video as fast as it spread on the web, prompting an international backlash from regulators who felt malicious actors had evaded Silicon Valley's defences too easily. Before the attack, the shooter also posted online a hate-filled manifesto that included references to previous mass killings.

Along with New Zealand and France, countries such as Australia, Canada and the United Kingdom endorsed the document, as did tech giants Amazon, Facebook, Google, Microsoft and Twitter.

"We've taken practical steps to try and stop what we experienced in Christchurch from happening again," Ardern said in a statement.

America's top tech giants celebrated the call – a voluntary effort, not full regulation – as an important step toward tackling one of the Web's biggest challenges. Amazon, Facebook, Google, Microsoft and Twitter issued a joint statement saying "it is right that we come together, resolute in our commitment to ensure we are doing all we can to fight the hatred and extremism that lead to terrorist violence."

But the White House opted against endorsing the call to action, and President Donald Trump did not join world leaders, including Canadian Prime Minister Justin Trudeau, and tech executives, such as Twitter CEO Jack Dorsey, in Paris.

In a statement, the White House said it stands "with the international community in condemning terrorist and violent extremist content online," and support the goals of the Christchurch call to action. But the White House still said it is "not currently in a position to join the endorsement."

A day earlier, as negotiations progressed, White House officials raised concerns that the document might run afoul of the First Amendment.

"We continue to be proactive in our efforts to counter terrorist content online while also continuing to respect freedom of expression and freedom of the press," the White House said Wednesday.

"Further, we maintain that the best tool to defeat terrorist speech is productive speech, and thus we emphasise the importance of promoting credible, alternative narratives as the primary means by which we can defeat terrorist messaging."

Amid global scrutiny, Facebook, Google and Twitter over the past year have hired more reviewers and created new artificial-intelligence tools in an attempt to thwart hate speech, extremism and terrorism online. Despite those efforts, the tech giants were unable to stop the spread of the Christchurch videos.

Fewer than 200 people watched the live stream during the attack, which Facebook said it removed 29 minutes after it began. But within 24 hours, users had attempted to re-upload the video onto Facebook more than 1.5 million times. About 300,000 of those videos slipped through and were published on the site before being taken down by the site's content-moderation teams and systems designed to automatically remove blacklisted content.

The Christchurch call reflects heightened global frustrations with Silicon Valley, which has struggled to stop malicious actors from weaponising social media platforms to deadly ends around the world. Facebook has been linked to ethnic violence in Sri Lanka, for example, and the company has admitted it failed to prevent the platform from becoming a tool to foster genocide in Myanmar. In response, regulators have introduced or adopted tough new rules over the past year that require social-media sites to take down offensive content faster or face tough fines.