A top-secret Christmas card sent to Bletchley Park codebreakers from the family of the MI6 security chief has been uncovered.

It was sent by Lady Evelyn Sinclair, wife of Admiral Sir Hugh Sinclair, the chief of MI6, in 1938 and an expert has said the secretive, and somewhat unusual festive card, was ‘sent with a wink’.

It doesn’t bare the hallmarks of a traditional Christmas card. It depicts several men in suits milling around a tidy lawn in the sun, but a research historian at Bletchley Park  said this is entirely intentional.

‘It is very much sent with a wink to the people who know its significance, without giving anything away to those who don’t,’ David Kenyon told The Guardian. 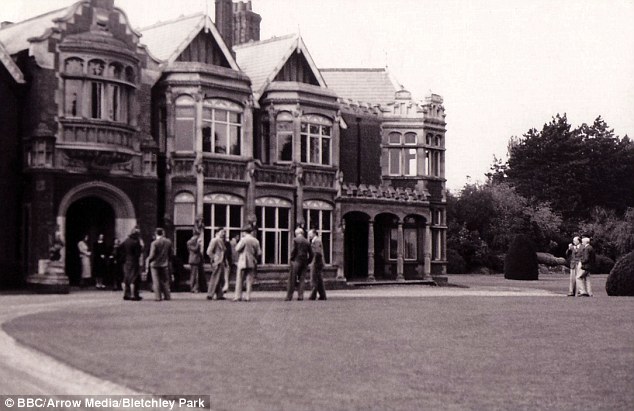 ‘It is the way the British intelligence services have always worked. Whether it’s speaking or writing, they’ve always been indirect so if you know what’s going on you’ll understand. If you don’t, nothing has been given away,’ he added.

‘Captain Ridley’s shooting party’ was the guise used to describe the summery gathering.

In reality, it was a collection of early spies, which numbered 150 in total, and codebreakers using a Buckinghamshire mansion as a training school as war seemed imminent.

David Kenyon said: ‘It is exciting to have a photograph of what was such a secret event. One of the problems we have here at Bletchley, because of the nature of the work, is that very few photographs of what was going on survive. Bletchley Park produced vital intelligence that played a huge part in swinging the war in the Allies’ favour – and cutting it short by an estimated two years.

As Winston Churchill was quoted as saying the Bletchley staff were ‘the geese that laid the golden eggs and never cackled’.

Intelligence from Bletchley played a vital part in the defeat of the U-boats in the six-year Battle of the Atlantic, British naval triumphs in the Battle of Cape Matapan in 1941 and the Battle of North Cape off the coast of Norway in 1943.

By 1944 British and American commanders knew the location of 58 out of 60 German divisions across the Western Front. 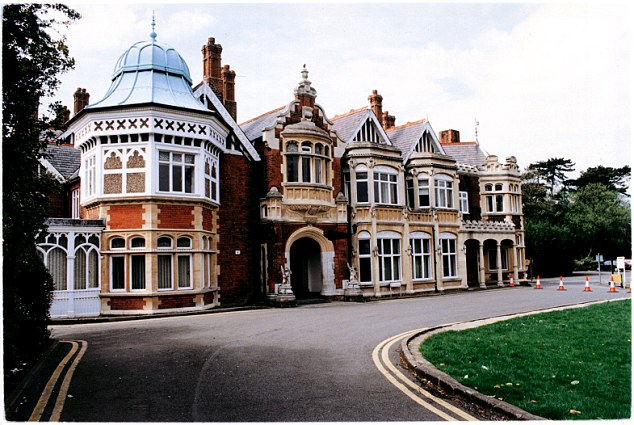 In addition, a great deal of information was decrypted about General Erwin Rommel’s Nazi forces in North Africa.

The German commander enjoyed a great deal of success against the British but with the help of intelligence from the codebreakers General Bernard Montgomery’s British forces were able to drive him back in 1942.

The success of Bletchley’s cryptanalysts was partly due, however, to German operators failing to encrypt messages properly.

Had they not been so sloppy, the outcome of the war could have been very different. Alan Turing, a British mathematician, was pivotal in capitalising on the German sloppyness.

His work gave Allied leaders vital information about the movement and intentions of Hitler’s forces.

Historians credit the work of Turing and his fellow codebreakers at Bletchley Park in Buckinghamshire with shortening the war by up to two years, saving countless lives.

Turing is also widely seen as the father of computer science and artificial intelligence.

WHO WAS ALAN TURING? 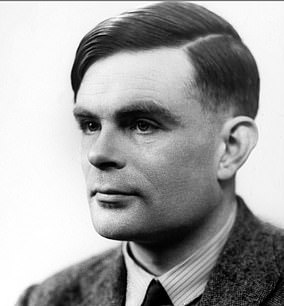 During the Second World War, Turing was pivotal in cracking the Enigma codes used by the German military to encrypt their messages.

His work gave Allied leaders vital information about the movement and intentions of Hitler’s forces.

Historians credit the work of Turing and his fellow codebreakers at Bletchley Park in Buckinghamshire with shortening the war by up to two years, saving countless lives.

Turing is also widely seen as the father of computer science and artificial intelligence.

In 1952 he was convicted for homosexual activity, which was illegal at the time.

In 1954, aged 41, he died of cyanide poisoning. An inquest recorded a verdict of suicide, although his mother and others maintained that his death was accidental.

As well as physical and emotional damage, his conviction had led to the removal of his security clearance and meant he was no longer able to work for GCHQ, the successor to the Government Code and Cypher School, based at Bletchley Park.

He received a posthumous Royal pardon in 2014, only the fourth to be issued since the end of the Second World War.

It was requested by Justice Secretary Chris Grayling, who described Turing as a national hero who fell foul of the law because of his sexuality.