THIS map shows the areas at risk of being pushed into tougher Covid-19 restrictions if infections don't fall.

Data from the ZOE Symptom tracker app has revealed that three areas could be moved into a harsh Tier 4 lockdown as cases continue to rise. 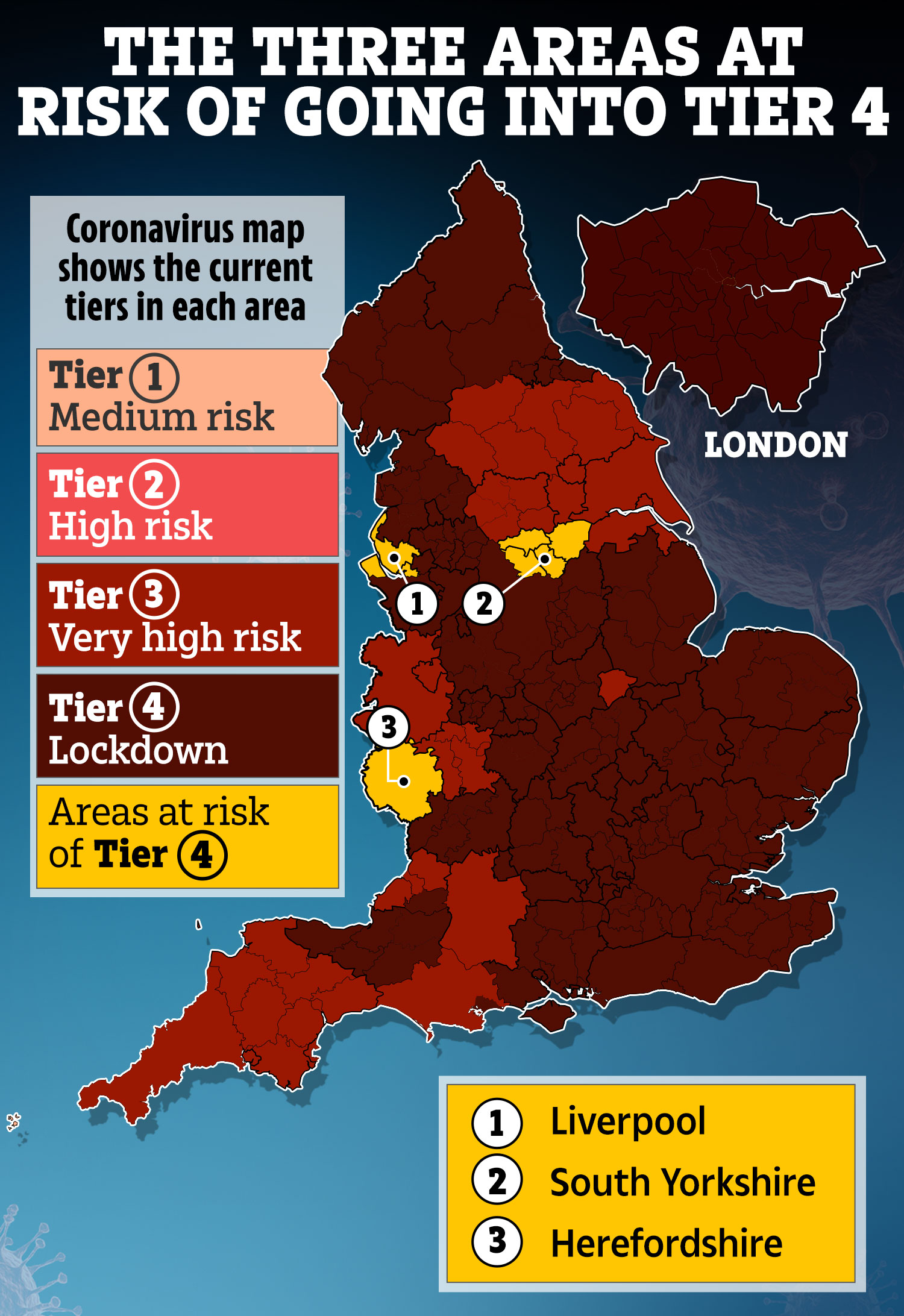 The data from the app comes after Health Secretary Matt Hancock revealed that even more Brits would be moved to Tier 4.

Areas such as Leicester, Cheshire and the Black Country were all moved from Tier 3 to Tier 4 after a rise in cases.

There are currently four tiers under the government's system, with Tier 4 meaning that all non-essential shops are closed, as well as gyms.

Earlier this week government scientists reportedly told Boris Johnson he needs to implement stricter measures to stop the virus from spiralling out of control, which could include a new Tier 5 level.

Data from the ZOE app shows the three worst performing areas in the country when it comes to coronavirus infections per 100,000.

App data shows that South Yorkshire is the worst performing area with 370 cases per 100,000 people.

It estimates that the R rate in the area is 1.2 and that at present, NHS hospital beds in the area, which comprises Barnsley, Doncaster, Rotheram and Sheffield are at 16 per cent occupancy with Covid-19 patients. 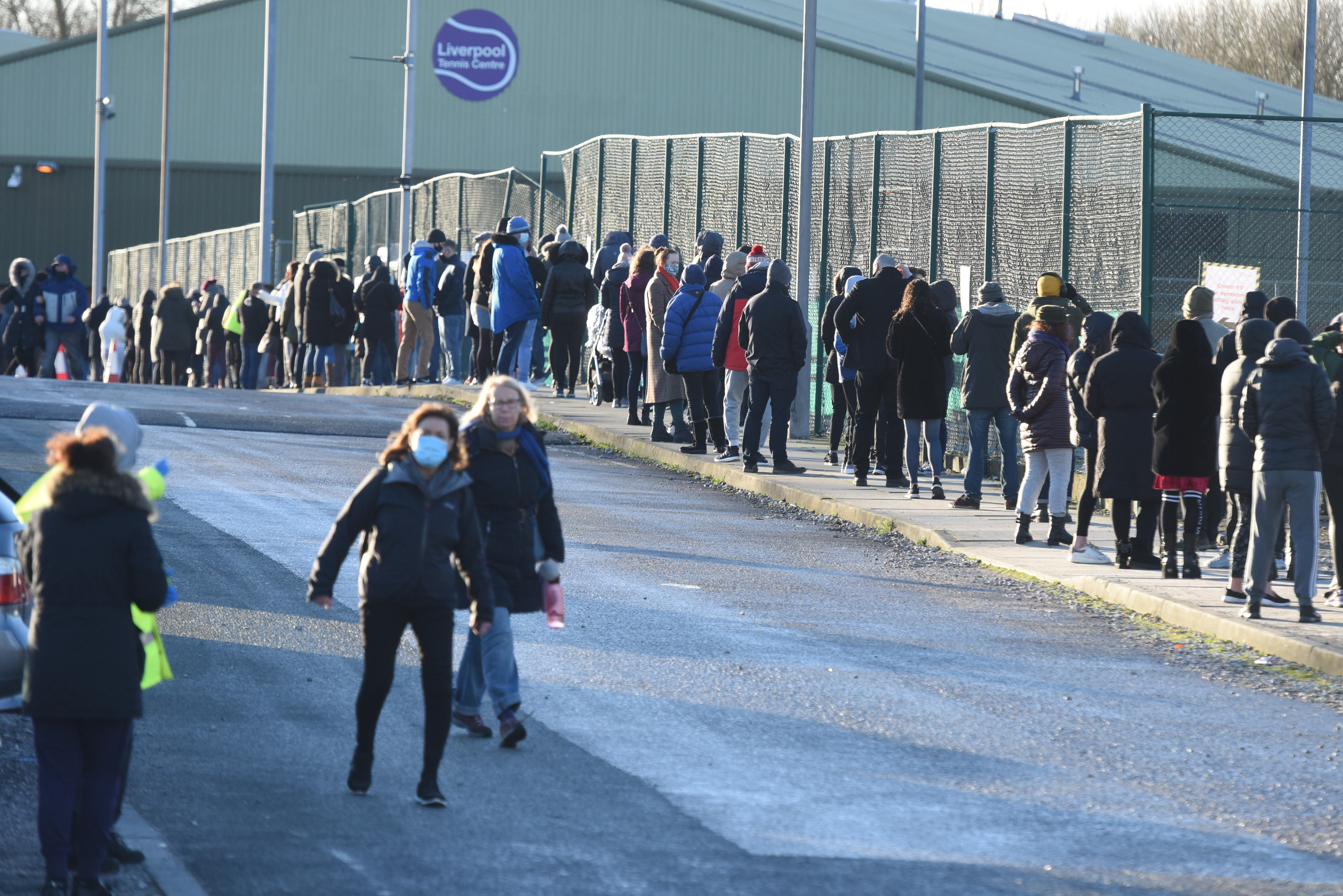 Liverpool had previously been hailed as a success story after a mass testing programme was rolled out in the city.

Mr Hancock yesterday revealed that the city would be pushed into Tier 3, but data from the ZOE app suggests it should be in Tier 4.

The R rate in the area is 1 and at present 17 per cent of NHS hospital beds are taken up in the region by coronavirus patients.

Herefordshire is also one of the worst performing areas with 348 cases per 100,000 people.

As even more areas have moved into tougher restrictions, the head of the ZOE study, Professor Tim Spector, today warned that schools shouldn't be closed.

Prime Minister Boris Johnson last night revealed that millions of school kids in the worst-hit Covid hotspots will stay at home for at least an extra two weeks after the Christmas holidays end.

Primary schools in parts of London, Kent and Herefordshire will remain shut for pupils due to spiralling cases – except for vulnerable kids and children of key workers who can attend.

They will stay closed until at least January 18. 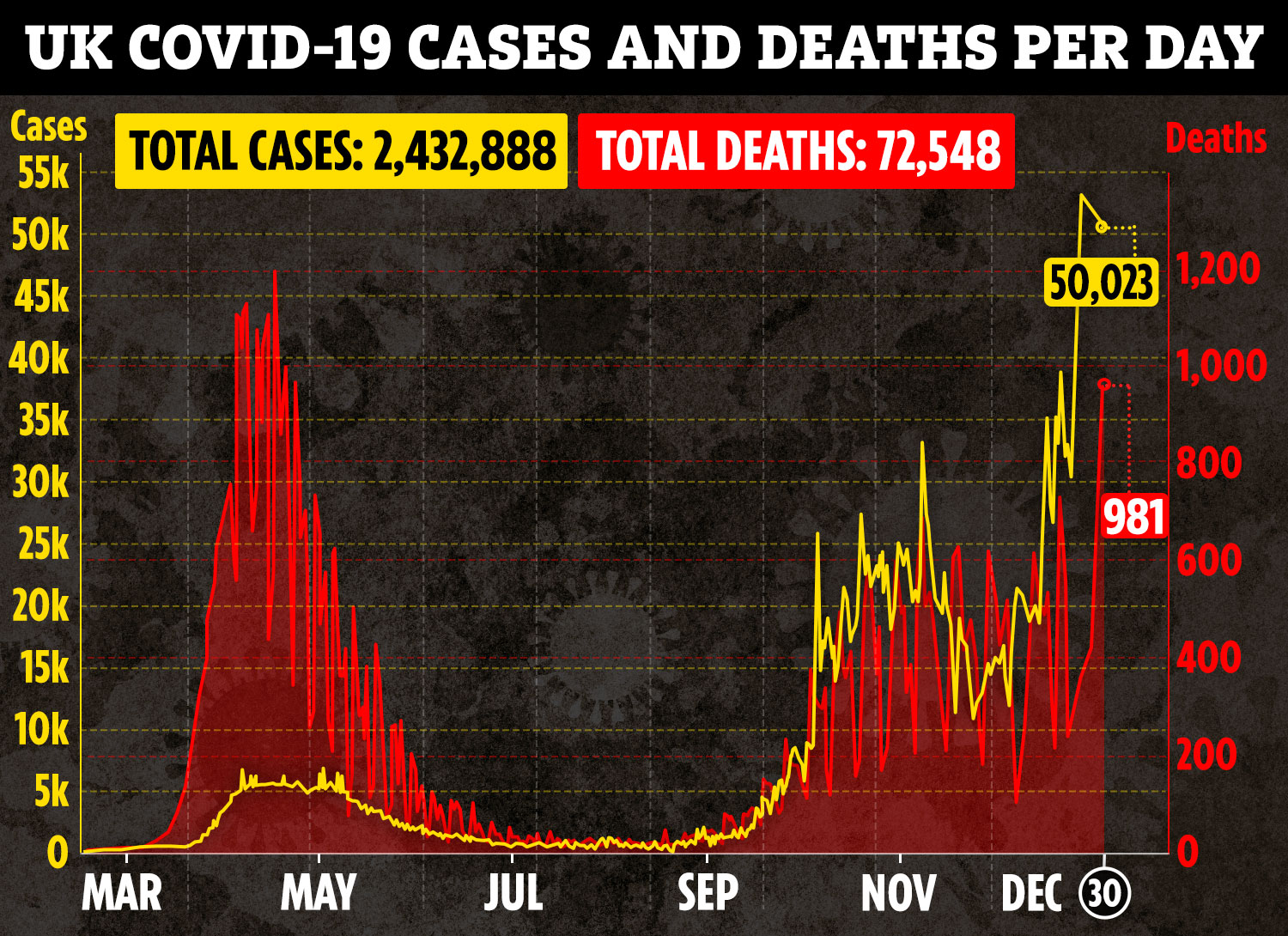 Prof Spector said: "With talk of tightening restrictions and school closures, we should remember that currently children are showing the lowest increases of any age group, so closing schools is a bad idea and will unlikely have a major impact on new cases, but will have long term consequences on children."

Aside from data from the ZOE app, Public Health England (PHE) today released it surveillance report on the coronavirus.

The data states that cases are continuing to rise across all regions in England.

This is in comparison to Yorkshire and the Humber, which has 188.3 cases per 100,000 – the lowest regional rates in the country.

As cases continue to rise, government scientists have also warned that a third national lockdown could be needed to curb the spread.

Freshly revealed documents from last week recommended that a fresh push must happen or cases would continue to spiral out of control.

Experts warned that they had a high level of confidence that extending Tier 4, making changes to schools, and putting more travel restrictions in place – both within the UK and abroad – would be required to get a grip on the virus.

The comments came as part of a meeting held on the new variant on December 23.

Since then Tier 4 has been extended twice – now covering three quarters of England – and schools reopening has been delayed.

Experts also said that because they don't know how the virus is being spread more easily, "enhanced mitigation measures are likely to be necessary".

Doctor Mike Tildesley told BBC Radio 4: "Cases are rising in a really concerning way, so I suspect that unfortunately we will see a ramping-up even further of restrictions, probably more of the country being in Tier 4 or ultimately probably a national lockdown before we get to the end of January."

However, Gavin Williamson ruled out a Tier 5 lockdown for now, which may see all schools closed as an extra step to stop the new strain – which is spreading even faster than the old ones.

Responding to the latest surveillance report figures, PHE medical director Dr Yvonne Doyle said the Christmas period saw a "worrying rise" in cases across every region of the country – particularly in those in their 20s-30s.

She said: "We must not now add further fuel to the fire, as meeting in close and large groups this New Year's Eve risks further transmission.

"The way we can beat this virus remains the same, whatever the variant. Reduce close contact with others and follow the guidance. Wash your hands, wear a mask and keep your distance."