Election commentators, if they talk about the Christian vote at all, often regard it as monolithic (and conservative). Are they right? No – and yes.

Christians by and large reflect voting trends in the general population, though active churchgoers are a little more likely to vote Liberal, according to a study by the National Church Life Survey (NCLS), a Christian research group. 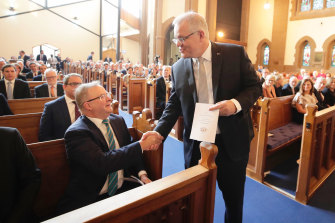 Opposition Leader Anthony Albanese and Prime Minister Scott Morrison during an Ecumenical Service to mark the opening of federal parliament in 2020.Credit:Alex Ellinghausen

NCLS director Ruth Powell says people’s votes are influenced by ethnicity, class, education and other factors, of which religion is just one.

So in what sense is the Christian vote united? It is in the clear duty not to vote for one’s own interests but for others’, for the country as a whole.

Recent years have shown that democracy is more fragile than we thought. Mercifully, Australia is nowhere near as riven by political disagreements as the United States, but divides that a few years ago we could talk across have become chasms that seem to need – and certainly get – megaphones. Yet we also see that democracy is a precious gift, and voting is one way to be involved.

Democracies work best when people don’t just think: “What’s in it for me?” Economists and politicians insist the hip-pocket nerve is the most sensitive, but that’s not necessarily so. I found it gratifying a couple of years ago when polling on proposed tax cuts showed so many Australians saying they would prefer the money to go to schools and hospitals. That’s what citizenship means.

So how, as someone who professes a Christian faith, should I approach next Saturday’s election? The main priority is to consider other people. Who is going to best help most people flourish?

Then there are moral questions. It is no accident, as often-justified cynicism rises among the electorate, that integrity has become a critical issue, one the “teal” independents have highlighted.

Christians recognise they are now just one voice in the marketplace of ideas, and no longer seek to impose their moral code on others, but justice, honesty, generosity and community remain vital.

Foreign aid, for example, is an easy target for government cuts, but we cannot allow it to be.

All this still doesn’t make deciding easy. Some Christians – those who value individual responsibility, for example – will tend to favour the Coalition, while others – who perhaps prize social justice – will incline to Labor.

However counter-intuitive it sounds, Christians should be swinging voters, looking at all the parties afresh each time round.

Barney Zwartz is a senior fellow of the Centre for Public Christianity.