No one quite knows why, in 1748-9, the Lutheran Bach drew together a wide range of music written over the course of his career into a Catholic mass, the monumental Mass in B minor.

We can just be glad that he did, for it leaves for all posterity a curated collection of what he saw as his finest vocal compositions, selected by the artist himself just as his life drew to a close. 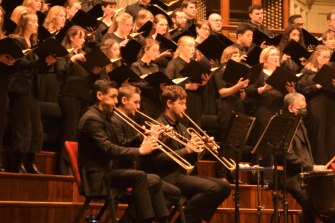 After a quietly reverential performance of Deborah Cheetham and Matthew Doyle’s Tarimi Nulay by way of acknowledgement of County, the Sydney Philharmonia’s performance of the Mass under conductor Elizabeth Scott emphasised flow and continuity. Scott’s undemonstrative style avoided unwanted accent or pointed emphasis, stepping back to allow the music to unfold for itself with calibrated speeds and an absence of mannerism.

There was no attempt to push the choir into stridency in the opening chords, and the lines of the great five-part fugue which forms the first Kyrie were etched with careful phrasing into the fabric of a vast tapestry.

Partnered by violinist and concertmaster Fiona Ziegler, soprano Celeste Lazarenko was agile and clear in the solo aria Laudamus te. Anna Dowsley’s Agnus Dei at the other end of the mass was a highlight for the expressive colour and poised sustained shape of line in doleful tempo. Their duet in the Christe was animated with balanced colour and graceful figuration. 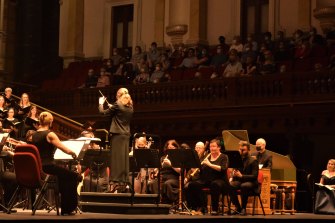 Bass/baritone Simon Lobelson sang Et in Spiritum Sanctum with precisely pointed articulation and accent. With large forces like this, the acoustic of the Town Hall can play tricks on listener and, I suspect, on performer and, from my vantage point, the briskly striding bass of the Credo sometimes risked running ahead of the choral declamations in the Credo.

Bach symbolically links the final Dona nobis pacem (‘Grant us peace’) to the earlier Gratias Agimus Tibi – (‘we give thanks’) by using the same music, and the choir began it with a sound of hushed imploration, gradually increasing to a radiant glow at the close.