Harmful misinformation shared online should NOT be removed because it could ‘exacerbate feelings of distrust’, experts warn

The UK’s national academy of science said removing bogus claims circulating on the internet could actually make the situation worse.

It could ‘exacerbate feelings of distrust’ and leave people searching for information in darker corners of the web, according to the Royal Society.

Misinformation has been rife throughout the coronavirus pandemic, with incorrect claims about vaccines allowed to spread on major platforms like Twitter, Facebook and Instagram – including that the jabs contain microchips or can alter DNA.

Other conspiracy theories included the idea that the pandemic was caused by 5G, which led to phone masts being set on fire.

But the Royal Society, which commissioned a report delving into how the internet impacts how people engage with scientific information, said the best way of tackling the problem is to invest in fact-checking websites.

This, it argues, would thwart the spread of misinformation and potentially educate readers wanting answers about complex topics.

It also called for the UK’s communications regulator to have wider powers to take action on misinformation and for online platforms to develop technology to detect false information. 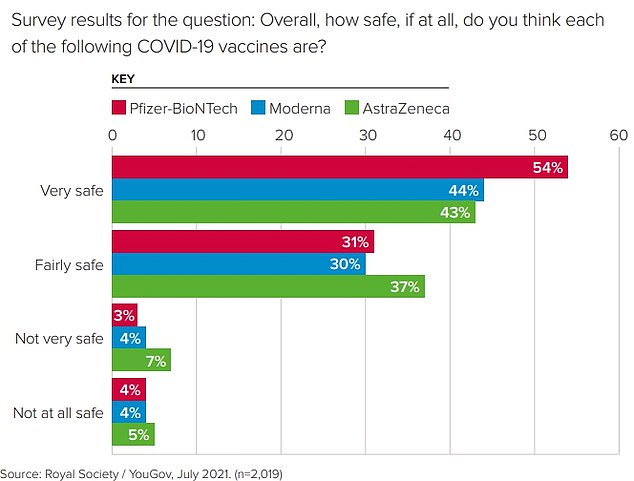 A YouGov poll of 2,019 people, commissioned by the Royal Society researchers, found eight in 10 people believe the Covid vaccine are ‘very’ or ‘fairly’ safe, with Pfizer being the most trusted vaccine, followed by Moderna and AstraZeneca 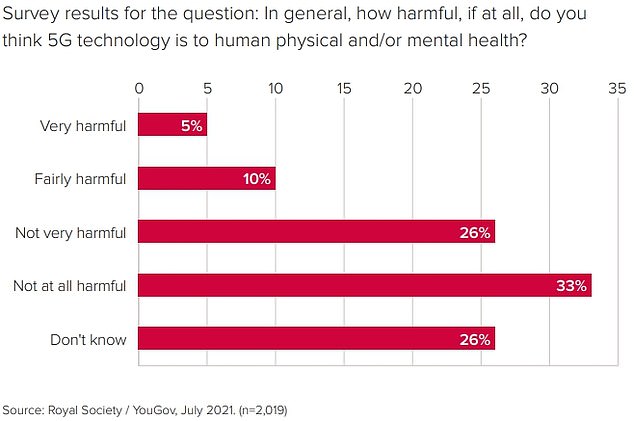 The survey also found that commissioned by the Royal Society researchers, found eight in 10 people believe the Covid vaccine are ‘very’ or ‘fairly’ safe, with Pfizer being the most trusted vaccine, followed by Moderna and AstraZeneca

Professor Frank Kelly, a mathematician at the University of Cambridge and chair of the report, said science ‘stands on the edge of error’ and the nature of scientific endeavour ‘means there is always uncertainty’.

He said: ‘In the early days of the pandemic, science was too often painted as absolute and somehow not to be trusted when it corrects itself.

‘But that prodding and testing of received wisdom is integral to the advancement of science, and society.’

Misinformation about the Covid vaccines spread online throughout the pandemic.

Conspiracy theorists claim the jabs implant microchips, can alter DNA and give you Covid.

CLAIM: It was rushed and isn’t safe

CLAIM: It changes my DNA

FACT: It’s impossible for the vaccine to change your DNA

CLAIM: It can give you Covid

FACT: The vaccine doesn’t contain a live virus strain, meaning it is impossible to catch the virus from the injection

FACT: It doesn’t contain egg proteins and can be given to people with allergies

CLAIM: It causes severe side effects

FACT: For most, the vaccine causes mild side effects that resolve in a few days or sooner

FACT: There is no evidence that the vaccine causes infertility

CLAIM: It can’t be taken if you have existing health issues

FACT: Contact your GP before getting the jab if you are concerned about an existing health issues

CLAIM: There is human and animal DNA in the vaccine

FACT: The Covid vaccines do not contain human or animal DNA

CLAIM: There is a microchip inside the vaccine

FACT: There are no microchips inside the Covid vaccines

Professor Kelly added: ‘This is important to bear in mind when we are looking to limit scientific misinformation’s harms to society.

‘Clamping down on claims outside the consensus may seem desirable — but it can hamper the scientific process and force genuinely malicious content underground.’

As part of its report, the Royal Society quizzed more than 2,000 Britons to determine the proportion of people who believed misinformation.

They found 80 per cent of people thought Covid jabs were safe, while 90 per cent believed humans were responsible for climate change.

This shows that the ‘vast majority’ of Britons agree with the scientific consensus, but warned that the ‘group who dispute the science, although small, can be influential’.

Inaccurate information ‘can cause harm to individuals and society at large’, such as ‘filling intensive care units’ during the pandemic if it leads to people not getting vaccinated, they warned.

The report said the Government should take steps to protect independent news media, as it exposes people to a wide range of viewpoints and is a key source of trusted information.

‘But those seeking to promote such misinformation have been able to quickly adjust their tactics,’ the experts warned.

Instead, leaving social media users to spot misinformation and call it out can be a ‘powerful anecdote’, they said.

Social media giants could curtail the spread of it by imposing limits on how many times a message can be shared via online messaging and using algorithms that verify information in messages or images, the team said.

They called for funding to be given to fact-checking companies, which play ‘a vital role in a healthy online information environment’.

And older adults, who are more likely to be ‘targeted by and be susceptible to online misinformation’, should be offered digital literacy classes, as well as educating children about misinformation in schools.

The team found people share information out of altruistic concerns, as well as for profit or due to political motivations.

Professor Gina Neff, an expert in technology and society at the Oxford Internet Institute and one of the researchers, said: ‘Scientific misinformation doesn’t just affect individuals, it can harm society and even future generations if allowed to spread unchecked.

‘Our polling showed that people have complex reasons for sharing misinformation, and we won’t change this by giving them more facts.

‘We need new strategies to ensure high quality information can compete in the online attention economy.

‘This means investing in lifelong information literacy programmes, provenance enhancing technologies, and mechanisms for data sharing between platforms and researchers.’

No10 is already embroiled in a row over its upcoming online safety bill.

The proposed bill is intended to make tech giants accountable for ‘harmful’ content on their platforms.

It would hand more power to regulator Ofcom, the Government and social media platforms to regulate what news users see on social media.

Tories have warned it will be ‘catastrophic’ for the freedom of speech of ordinary people.

And the proposed rules raised the prospect that the Silicon Valley firms could take down posts they think are not ‘politically correct’ even though they are legal.

News organisations such as MailOnline should be given a ‘positive exemption’ from the provisions of the bill, industry representatives have said.

Peter Wright, editor emeritus of DMG Media, told MPs in October that social media giants should not moderate journalistic content when it is produced by ‘recognised news publishers’.