She has the body of a woman half her age and exercises tirelessly to keep it, so is it any wonder Amanda Holden, 50, is so happy in a bikini?

Or that, when it comes to her social media, the TV presenter turns that stunning body into a human billboard, plugging the swimwear lines of her friends.

By the pool, on a boat, on the beach, in the sea and even in her garden in the middle of winter, she regularly strips off, pops on her designer sunglasses and a smile — and, as often as not, raises a glass of something refreshing and alcoholic as well.

This week, while on holiday in Portugal, she was plugging her friend Tess Daly’s new swimwear line, Naia Beach.

In a convenient synergy, it turns out that the two women are also stable mates at the same talent agency, YMU.

Amanda Holden is a household name for Britain’s Got Talent, so her services wouldn’t come cheaply. She could earn between £2,450 and £4,100 per post.’

However, friends of the TV and radio star say she wasn’t paid to plug Tess’s wares to her 1.7 million followers.

‘They are good friends, so she is supporting her new venture,’ says one. ‘Amanda loves the sun, so any excuse to pop on a bikini and soak up some rays, she’s there with bells on.’

Amanda does do promotional paid work on her Instagram, but these are marked as sponsored posts or she uses the word ‘ad’ in the text.

‘She is not getting paid to post any bikini shots,’ insists the pal.

Money-spinning or not, the bikini posts are proving to be a dependable billboard that’s bound to lead to a boost in sales for the labels Amanda wears.

So who has she plugged, where and when?

With the temperature turning Arctic in the UK in April, Amanda posted a throwback picture of herself relaxing on a tropical beach, wearing a £220 leopard-print bikini by Melissa Odabash.

‘It’s got me dreaming of distant lands when it’s safe,’ she wrote. ‘Hottest girl!’ replied Melissa 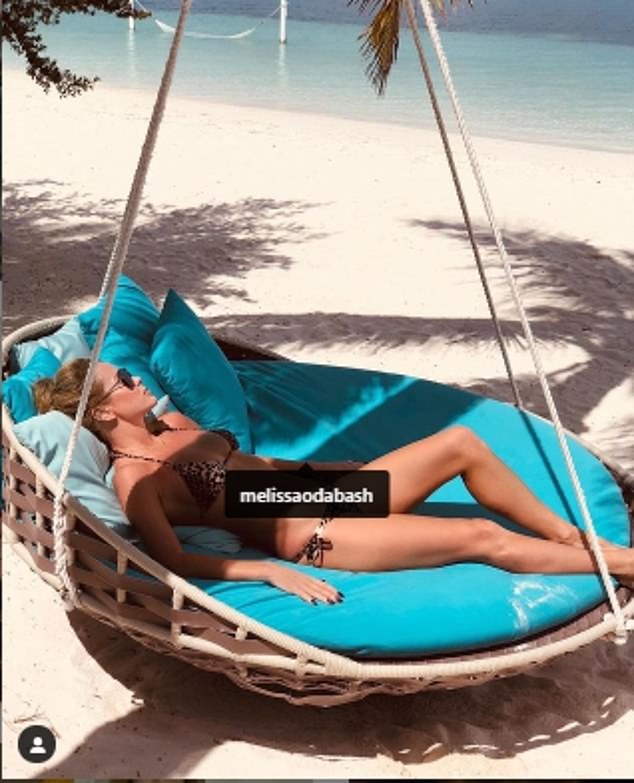 Grumbling about the ‘bone-chiller’ sea, but claiming to have had calorific fish and chips for dinner on a family holiday in the UK last July, Amanda tags Melissa Odabash swimwear and Sophie Theakston and Annoushka jewellery. 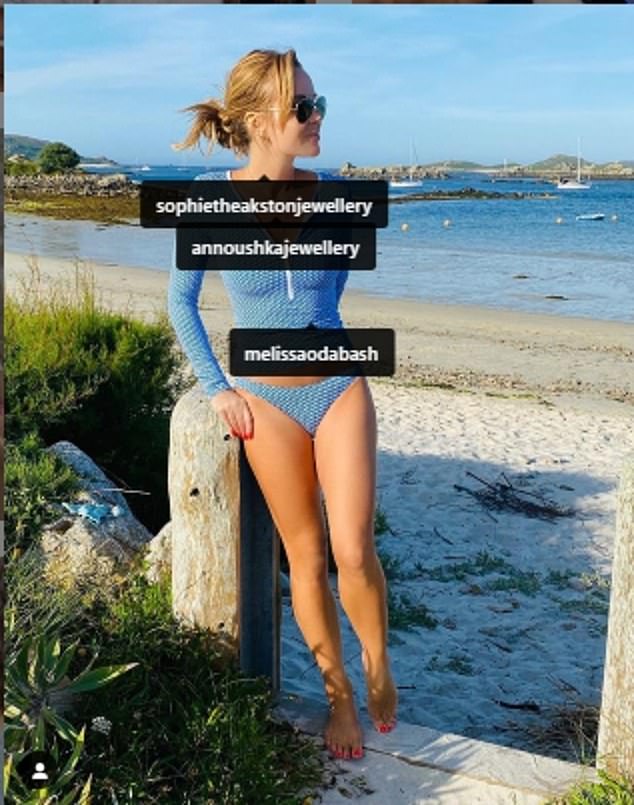 Tagging the swimwear brand Solid and Striped while wearing a £160 floral bikini in a snap taken in a hotel in sunny Corfu in August 2019. 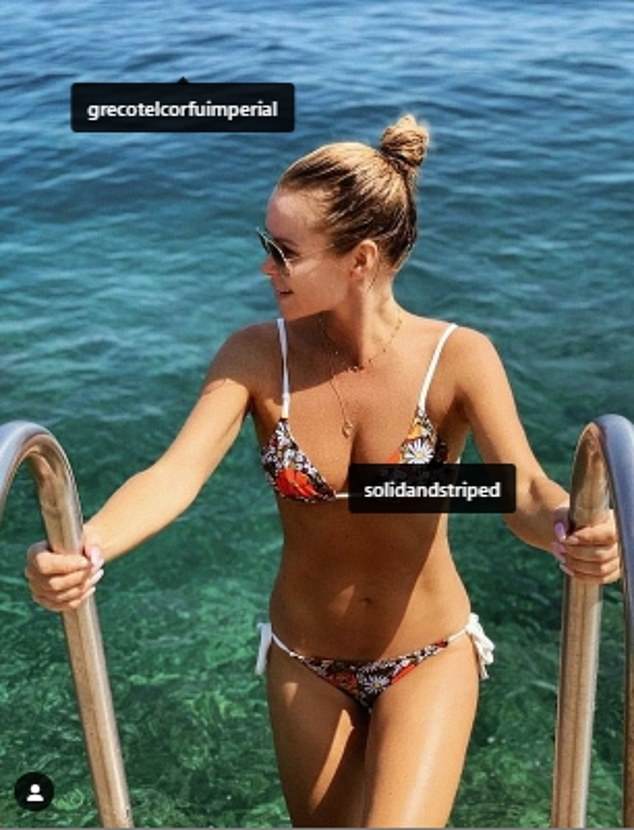 Perched on the side of her hot tub in April, Amanda gives a shout-out to her pal Tess Daly and her swimwear brand Naia Beach, while wearing a £120 Clio one-piece.

Many of Naia Beach’s swimsuits are made from recycled fishing nets. Celebrity make-up artist and hair stylist Christian Vermaak also gets a tag. 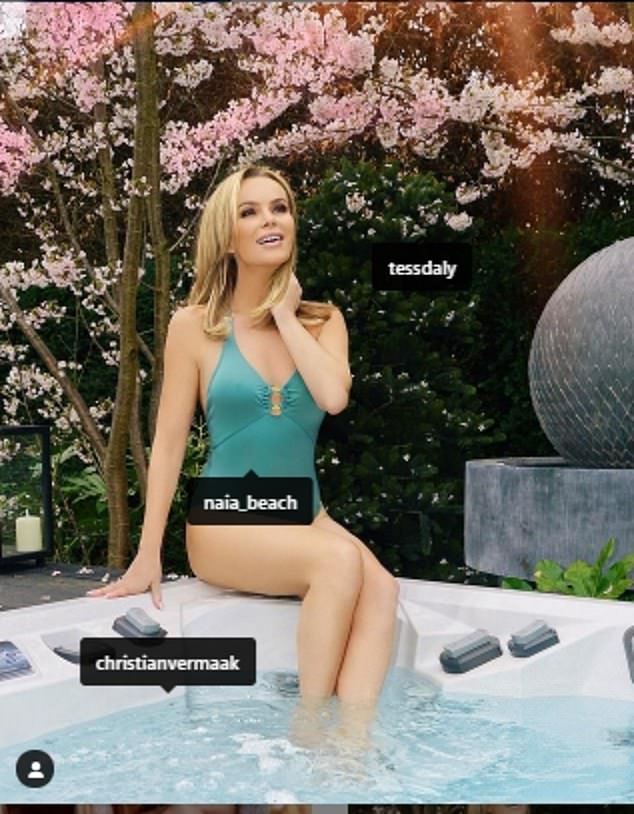 Amanda sports stylish shades and a pink bikini as she reclines on a spectacular inflatable shaped like a pair of angel wings in a swimming pool last summer — and she still manages a tag for Carrie Elizabeth jewellery. 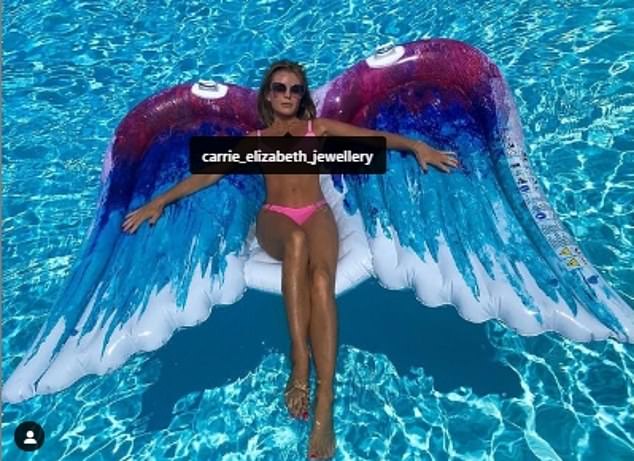 In a patriotic red-white-and-blue cossie last summer, Amanda celebrates the weekend with a glass of fizz.

She tags ‘hottubs-oxfordshire’ but says it is ‘bought and paid for’ and adds a plug for that night’s BGT. 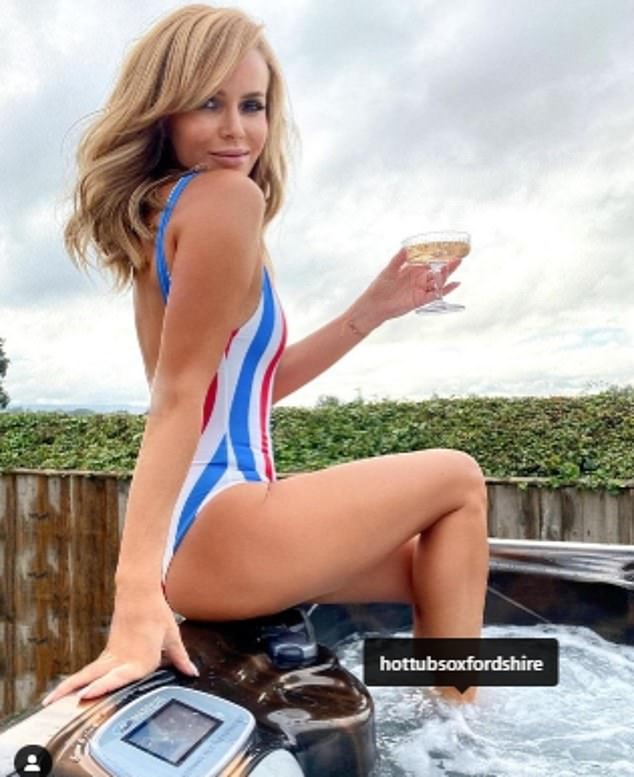 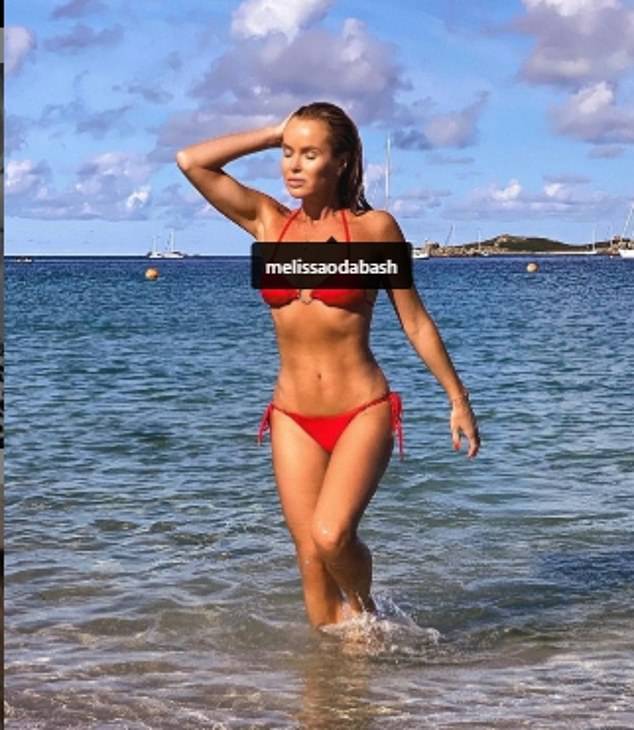 Life on the ocean wave:

With the cheeky tag #bottomsup, Amanda takes a boat trip off Corfu in 2018. She is wearing a £38 striped bikini by designer Nobody’s Child. 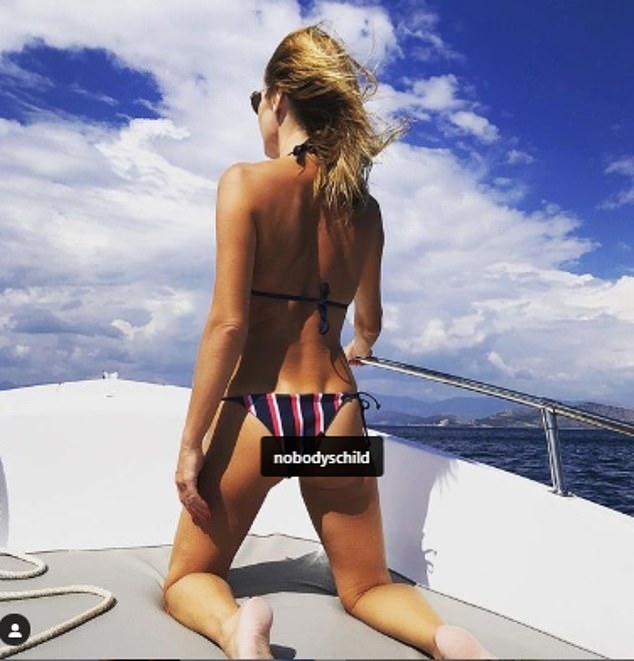 Amanda tagged drinks brand Aperol in this post while soaking up the rays at home last month. Oddly, there was no plug for her £170 Jacquemus colour-matching cossie. 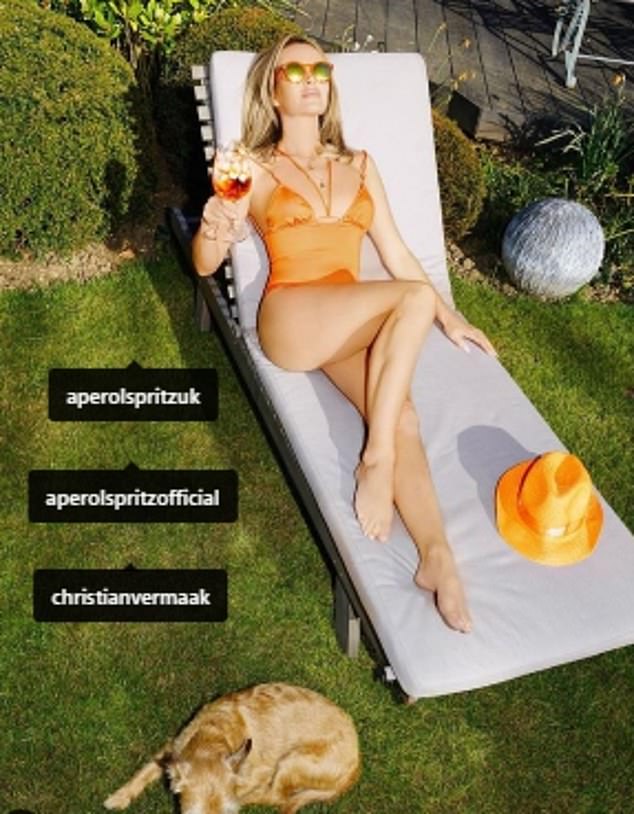 A snifter of rosé with plenty of ice and a pink bikini in April 2020 — plus another tag for Melissa Odabash. 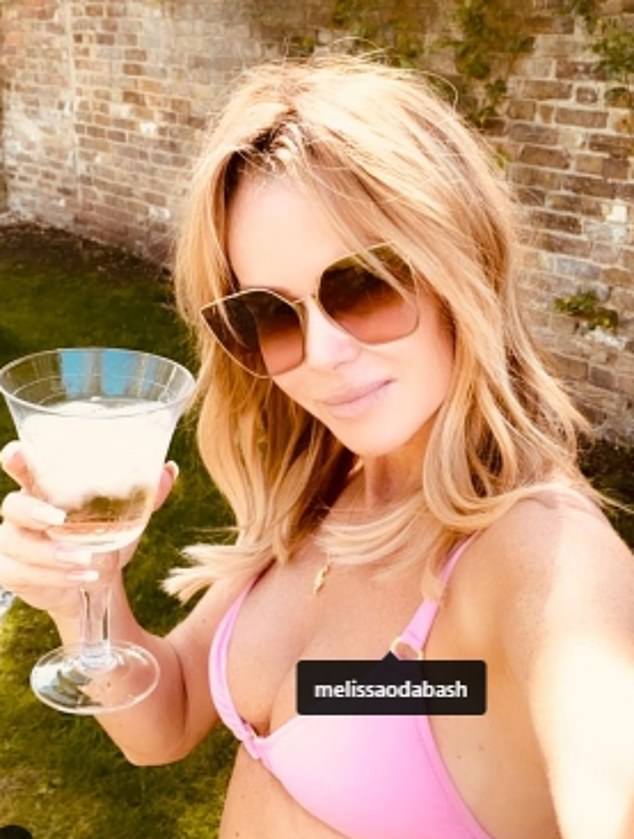 Matching her bikini to her ice cream cone on a romantic 2018 break with husband Chris in the Maldives. 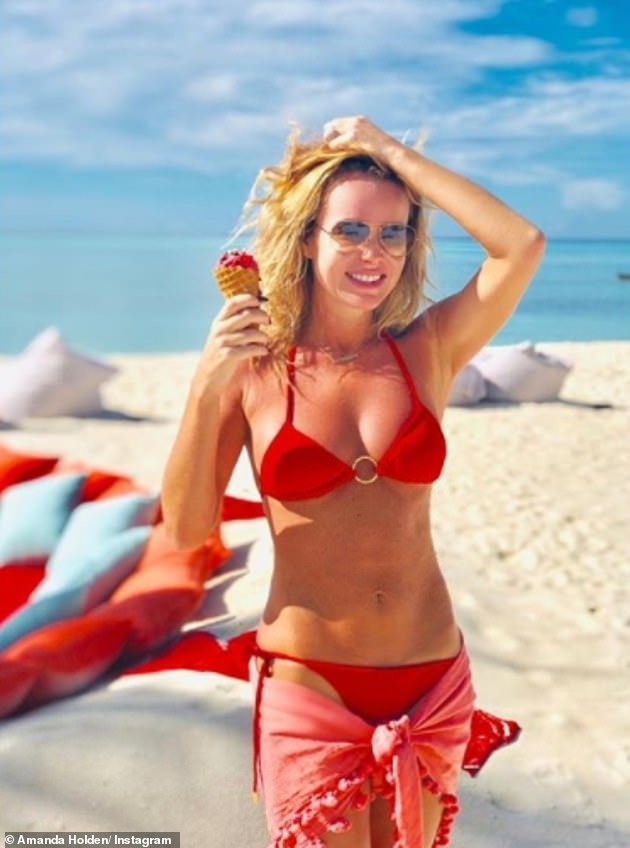