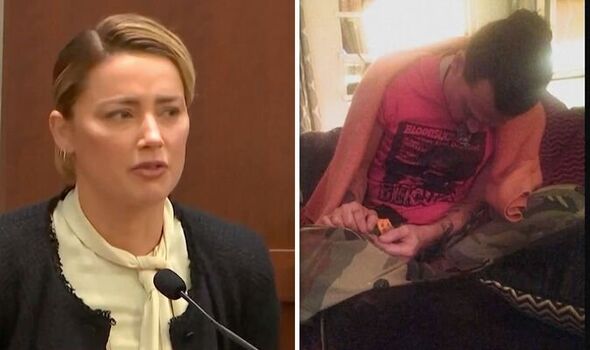 Amber Heard has shown the jury two photos of her ex-husband Johnny Depp apparently passed out, with the actress claiming Johnny had been on a drugs binge.

Johnny is suing Amber for defamation for a 2018 op ed she wrote in the Washington Post where she said she was a victim of domestic violence, as he says he was the implied abuser.

He admits to taking drugs often during their relationship but has denied all accusations of domestic violence.

The first picture showed Johnny slumped on a sofa, after an alleged drug binge with his friend, actor Paul Bettany, according to Amber’s evidence in court.

In the second photo, Johnny appears to be unconscious on the floor of his hotel room, and Amber claimed in court this was after a row where he accused her of cheating on him.

Aquaman star Amber is taking to the stand for the second time today, after she broke down in tears yesterday recalling the time she claimed Johnny first slapped her.

She claimed in court he did so because she laughed at his ‘Wino forever’ tattoo, which he had altered from ‘Winona forever’ after his relationship with Winona Ryder ended.

Johnny has maintained he has “never hit a woman”.