In a new social media post, the former judge of ‘America’s Next Top Model’ says that she’s ‘so excited’ to announce the arrival of her newborn sons and tells her fans that she’s ‘taking some time to heal up.’

AceShowbiz –Ashley Graham has welcomed her “happy and healthy” twin babies with her husband Justin Ervin. The season 24 judge of “America’s Next Top Model” had a home birth at 40 weeks of pregnancy.

The 34-year-old mom made use of her Instagram Story on Friday, January 7 to announce the exciting news. Over a black screen, she wrote, “Justin and I are so excited to share that our baby boys are here.”

“They were born early this morning at home and are happy and healthy,” Ashley further detailed. Though the model didn’t reveal the names of her new bundles of joy, she told her fans and followers, “I’m taking some time to heal up and connect with my husband and three boys, but I truly can not wait to share more with you all. Much love, AG.” 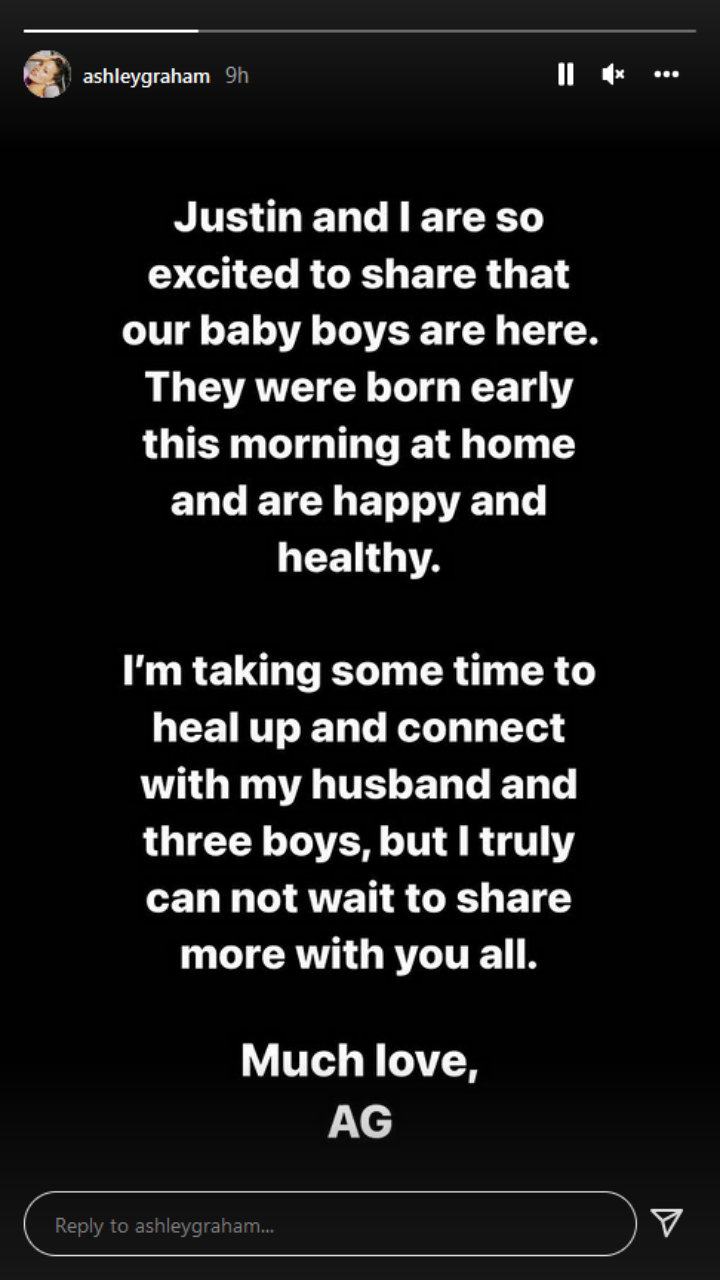 Ashley Graham announced that she welcomed her twin babies with her husband Justin Ervin at home.

One day prior to delivering her sons, Ashley joked that her babies were having an “extended stay” in her belly as she’s a few days past the due date. On Thursday, she posted a series of pictures in which she showed off her bare baby bump by only wearing a cropped lime green turtleneck sweater.

In addition, Ashley, who first revealed that she’s expecting more babies in July, took to her TikTok account to share a clip of her playfully lip-syncing to a sound that contains Kylie Jenner and Rosalia‘s screams as well as Aaliyah‘s “Are You That Somebody?”. In the caption, she quipped, “I was supposed to give birth 5 days ago.”

In the comment section of her post, many weighed in on her pregnancy as her baby’s due date had passed. One social media user wrote, “I feel like you’ve been pregnant for a year and a half,” while another added, “I’ve never seen a twin mom go PAST the due date.” A concerned fan penned, “Aren’t you having twins?!? Why didn’t they induce [sic]? I’d be dying??!?”

Days earlier, Ashley talked about her expected due date in an Instagram post. The model, who shares her one-year-old son Isaac with her husband, shared an update on New Year’s Day, writing, “Made it full term today (40 weeks!). Due dates are just a suggestion, babies will always come on their birthday.”