Demi didn’t just get bangs or highlights. Nope, in true badass form, they shaved their damn head and, for the record, Demi with a buzz cut is fierce AF. They debuted the new ~lewk~ on Instagram, in a video shot FaceTime by photographer and director Angelo Kritikos and declared the bold cut the beginning of a #freshstart in the caption.

Demi also shared some angles of the new ‘do on their IG Story, because you can’t just get this haircut and not show it off in every way possible, clearly: 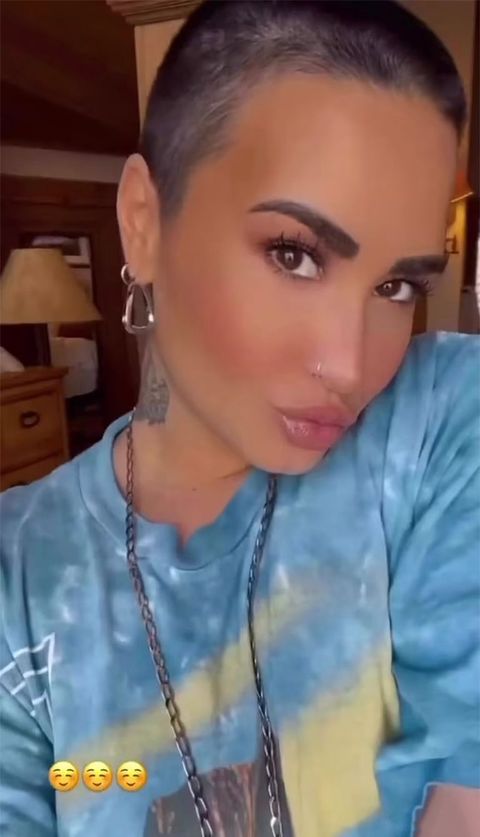 Demi, who came out as non-binary earlier this year, opened up to People in June about their past struggles reconciling their true identity with the image people expected them to maintain.

“I really believe that when I overdosed in 2018, it was because I was ignoring my truth. I went to such great lengths to suppress who I really am to fit this sexy, feminine pop star and actress image that others had assigned for me that I never truly identified with,” Demi explained. “I did it though because I thought that’s how it was supposed to be….You can only carry on like that for so long before it comes spilling out and manifesting, sometimes negatively, in other ways.”

In their documentary, Demi Lovato: Dancing with the Devil, which premiered on YouTube in March 2021, Demi opened up about their 2018 overdose, revealing, “The doctors told me that I had 5 to 10 minutes. Like, if no one had found me, then I wouldn’t be here. And I’m grateful that I’m sitting here today,” and opening up about lying in past interviews about being in a good place when, in reality, they were “miserable.”

“I feel good,” Demi added of their mental and emotional state as of filming Dancing with the Devil. “I feel more joy in my life than I’ve ever felt because [I’m not] quieting or diminishing any part of myself.”

Part of that commitment to not quieting or diminishing themself is to let their appearance reflect how they want to look and, clearly, this buzzcut is a part of that. Unsurprisingly, the internet has reacted with overwhelming approval for Demi’s haircut, which is pretty undeniably incredible.