There’s only one thing that feels the tiniest smidgen better than watching Naomi Osaka absolutely dominate on the tennis court: watching the love she gets from her parents after every match. The four-time Grand Slam tennis champ has a super-close relationship with her mom, Tamaki Osaka, and her dad, Leonard Francois. These two raised Naomi and her older sister, Mari, in Japan before moving to the United States when Naomi was three-years-old, and they couldn’t be more supportive of their daughter and her wildly impressive career. Get to know Naomi Osaka’s parents below.

Tamaki and Leonard Met in College

Tamaki, who’s from Japan, met Leonard, who’s from Haiti, when he was visiting Hokkaido as a college student. The couple kept their relationship a secret from Tamaki’s parents for years, and then when she was in her 20s, her father wanted to arrange a marriage for her. As the New York Times reported in 2018, “The truth then spilled out: Tamaki was already seeing someone—a foreigner who also happened to be Black. Her father erupted in outrage, excoriating her for bringing disgrace on the family.” The couple ended up moving to Osaka—where Naomi was born.

They Moved Their Family to Long Island

The family relocated from Japan to Long Island when Naomi was three-years-old to live with Leonard’s parents. “My dad’s Haitian, so I grew up in a Haitian household in New York. I lived with my grandma,” Naomi said at a 2018 press conference. “And my mom’s Japanese and I grew up with the Japanese culture too, and if you’re saying American, I guess because I lived in America, I also have that too.”

Naomi credits her mom for motivating her and encouraging her to create her own lane and embrace her upbringing. Here’s what the olympian said in a May 2021 interview:

Naomi’s Dad Was Inspired by the Williams Sisters

Leonard decided to teach his daughters tennis after watching Venus and Serena Williams. He even took a leaf out of their father Richard Williams’ book, telling the New York Times, “The blueprint was already there. I just had to follow it.”

Both of Naomi’s parents were so dedicated to her career that they moved to Florida so she could have better training opportunities.

Her Dad Briefly Coached Her

It didn’t last long, and Naomi joked at the time, “Yeah, he’s so annoying. Oh my god. Do you hear his on-court coaching? I can’t believe it. He runs up to the bench talking about, ‘Be calm.’ That’s it. He doesn’t give me any tactics. I can’t believe this. I was so mad.”

But she also tweeted, “All jokes aside, I love my dad so much and I’m grateful for everything I learn from him on and off the court. I feel extremely lucky to be his kid ’cause he just drops knowledge.”

All jokes aside I love my dad so much and I’m grateful for everything I learn from him on and off the court. I feel extremely lucky to be his kid cause he just drops knowledge 🙏 https://t.co/JEAvIXaE8c

“We made the decision that Naomi would represent Japan at an early age,” Tamaki said. “She was born in Osaka and was brought up in a household of Japanese and Haitian culture. Quite simply, Naomi and her sister, Mari, have always felt Japanese so that was our only rationale. It was never a financially motivated decision nor were we ever swayed either way by any national federation.” 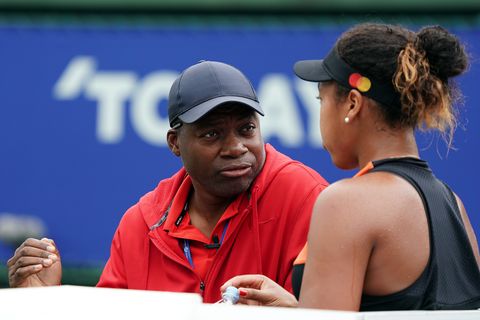 In October 2019, Naomi actually gave her U.S. citizenship up in order to play for Japan in the 2021 Summer Olympics. Though she ended up losing in round three, and subsequently taking her second prolonged break from the sport for personal and mental health reasons, her sweet parents have remained by her side, cheering her on from the sidelines. We truly could not be more obsessed with this family!