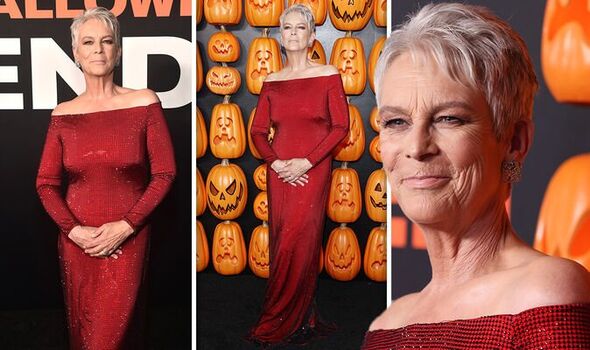 Jamie Lee Curtis, 63, showed off her fantastic figure in a sparkly red dress at the premiere of “Halloween Ends” held at TCL Chinese Theatre, Los Angeles yesterday. The famous actress’ appearance comes after she pointed out she is “pro-ageing” and that she regrets the botox and surgery she has undergone in the past.

The Halloween franchise star looked gorgeous in the crimson gown, which was decorated with thousands of tiny sequins.

Accessorising with some simple square silver earrings, Jamie posed with her co-stars in front of various pumpkins and other halloween decorations.

In a recent interview, the star shared some advice she had given to her daughters Annie, 35, and Ruby, 26.

“Don’t mess with your face,” she stressed. “I did plastic surgery. I put Botox in my head. Does Botox make the big wrinkle go away? Yes. But then you look like a plastic figurine,” she told TODAY.

The star also previously told Fast Company how the industry’s obsession around anti-ageing has warped beauty standards over time.

“The current trend of fillers and procedures, and this obsession with filtering, and the things that we do to adjust our appearance on Zoom are wiping out generations of beauty,” she said.

“Once you mess with your face, you can’t get it back.”

Jamie Lee Curtis, 63, looked stunning as she hit the red carpet in a bedazzled gown

The Halloween star rocked her red carpet look soon after speaking out against botox and plastic surgery.

The Freaky Friday star took photographs next to actress Andi Matichak, who will star in the upcoming flick.

The Knives Out alumna told the Fast Company that current trends are “wiping out generations of beauty”.

The award-winning actress has delivered a number of outstanding performances in the franchise that spans 12 films.