A little party never killed nobody! Jerry and Jessica Seinfeld’s eldest daughter Sascha turned 21 on Sunday November 7, and the comedy icon’s girl celebrated the major birthday with a Roaring Twenties themed party. Sascha dazzled in a sparkling flapper-inspired dress, complete with a glittering headband, and posed for photos with friends, her siblings, and of course, her parents!

Sascha’s mom wrote a touching tribute to her daughter to celebrate her 21st birthday. “We had the best weekend celebrating this phenomenal human being, along with her friends, who love her almost as much as we do. She works hard, she plays hard, and in between, makes life better for everyone in her orbit,” the 50-year-old author wrote in the caption. “I love you, Little Magic Girl. I am so proud to be your mom.”

The photos showed various moments while they celebrated over the weekend. Besides photos of Sascha with her girlfriends, Jessica also shared photos of her daughter posing alongside her brothers Julian, 18, and Shepherd, and her father. Sascha’s brothers sported open button-down shirts and dark pants. Jessica rocked a black dress with a huge silver belt-buckle in the center of it. The 67-year-old comedian rocked a classic dad look with a white button-down under a dark sweater for the celebration. 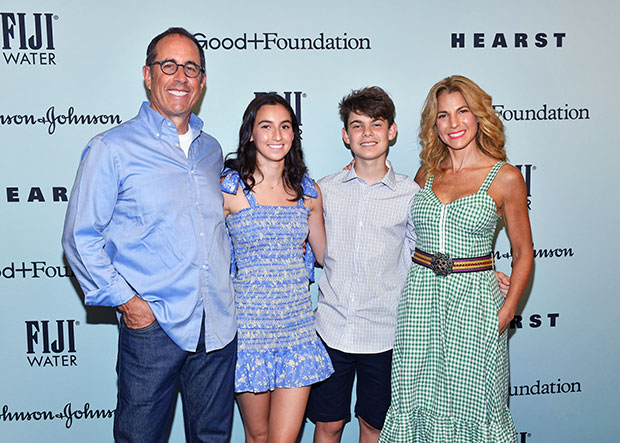 Jessica shared more photos on her Instagram Story, and spoke about how Sascha was the “best” sister and friend. She posted a photo of herself and Jerry, showing that she was in disbelief at how old their daughter was getting. “We are parents of a 21 year old,” she wrote along with one picture. “She is the greatest,” she wrote in another photo of her daughter.

It seemed like a joyous celebration for the Comedians In Cars Getting Coffee star and his family. Back in September, Jerry had a sweet father-son moment with his sons by bringing his boys along to the New York Mets’ game against their hometown rivals, the Yankees. Other than Sascha turning 21, it’s been a big year for Julian, who started college as a freshman at Duke University in August.