Kerry Katona has opened up about her recent breast reduction surgery in a bid to be more comfortable, as she posted a characteristically frank new video to her YouTube channel.

The former Atomic Kitten singer, who now makes a large chunk of her income through her OnlyFans account, explained that although her ‘bad boys’ helped with that stream of income, they had been ‘doing her head in’ due to their weight – causing back ache.

As she was shown preparing for the surgery back in May, the 41-year-old claimed that her chest made her look like the Honey Monster known from the Sugar Puff cereal adverts ‘every time I put a jumper on’.

‘So, I’m getting a reduction today and I’m very, very excited but I’m also really, really nervous,’ she admitted.

Kerry then shared the full plan for her procedure, which she hoped would take her from an E cup to a C cup in a ‘big drop’, alongside an uplift too.

Cracking jokes at her own expense on the way to the clinic, the star reflected on the augmentation she had just last year. 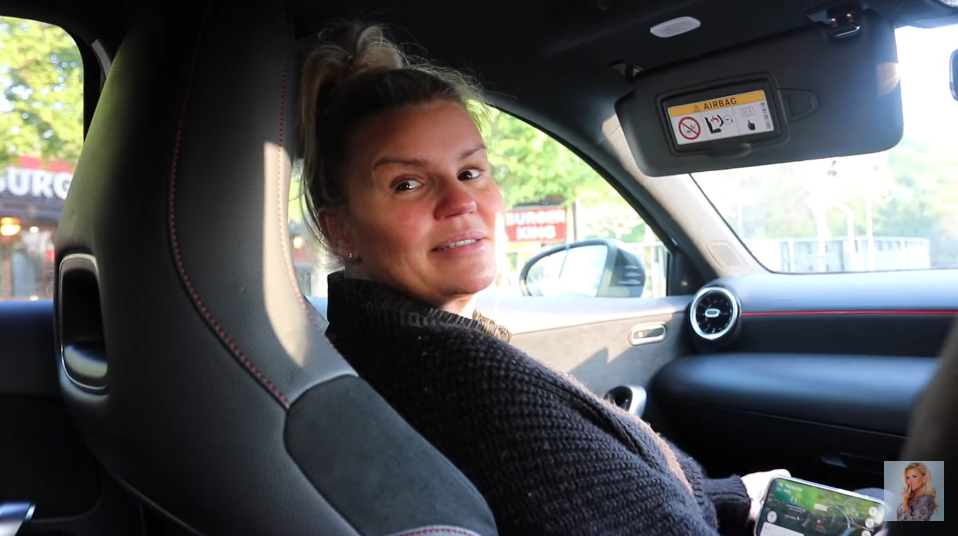 ‘I had an implant put in last year – why I did it, I don’t know. I love a freebie and I need to learn to stick to just taking goodie bags!

‘Honestly, I’ve been sliced and diced that much I don’t think this is my arm anymore.’

She also called herself the ‘human Frankenstein’ and said that she was like an ‘Ikea flatpack’.

The star is believed to have had at least four prior breast surgeries since 2004, as well as liposuction, fillers and botox, among other procedures,

The star filmed herself getting ready for surgery at Pall Mall Medical, as well as brief snippets of her consultation with the doctor and anaesthetist, where she said she was ‘nervous’.

Following her boob job, Kerry revealed she was ‘a bit drowsy’ as she sat in her hospital bed and continued: ‘I’ve got no boobs left, they’ve gone. Literally, I’ve got no boobies.

‘But all went well apparently, so that’s all I’ve got to say.’

In an updated clip at the end of the video, Kerry said she ‘officially in the itty bitty t**ty club’ as she recovered from going under the knife and promised to share results ‘in a couple of weeks’ time’.

Kerry recently spoke about one of her children’s battle with anxiety as she revealed her heartbreak over hearing her teenage daughter Heidi saying she ‘didn’t want to be here anymore’.

Kerry wrote that she ‘cried her eyes out,’ and felt ‘completely helpless’ to make her daughter feel better.

She added, however, that she is grateful Heidi feels she can be ‘open’ with her mother and tell her how she is feeling, as she encourage people who were struggling to reach out.