Riding on Kim Air is a little like being Spider-Man, in the whole “with great power comes great responsibility” thing. And that policy is a no exceptions kind of thing.

Kim Air, in case you don’t know, is what Kim Kardashian calls her swanky, customized G650ER aircraft. Kim proudly showed off the $150 million jet on an episode of her family’s Hulu series, The Kardashians, in June, giving fans an MTV Cribs’-style tour in which she gushed about the plane’s luxe decor (all cashmere, all over, FWIW), and “joked” about the rules for passengers.

“Don’t breathe; don’t touch a thing,” she said. “I’m gonna do no shoes on the plane and get custom Skims slippers. Wouldn’t it be so cute if I made custom Skims in this color, like pajamas, socks, and blankets and slippers?”

All air-quote-joking aside, Kim is v srs about the rules her famous friends *AND FAMILY* must follow if they want to hitch a ride on Kim Air. In this week’s episode of The Kardashians, Kim chatted with her sister, Kendall Jenner, ahead of their trip to Milan for a Prada fashion show and, when Kendall mentioned her plans to “get a quick spray tan” before takeoff, Kim was less than pleased and immediately had questions about the timeline.

“It’s a three-hour one so I sit in it for three hours and then shower it off,” Kendall explained of her spray tan plan.

At this point in the story, the world was reminded that no one comes between Kim K and her pristine-condition cashmere. 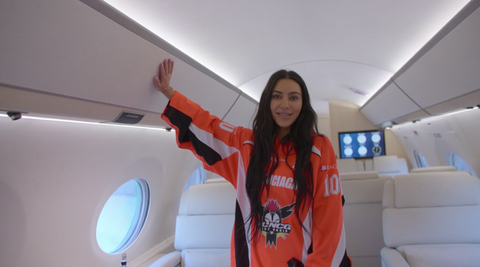 “Usually planes are dark with lighter leather—mine, I had custom all light wood,” Kim explained during the official Kim Air tour. “I had a bathroom put in the front, a bathroom in the back. Every seat has its own phone charger. The best, most exciting part of the plane is, it’s all cashmere. Cashmere ceilings, pillows, headrests. I feel like I’m doing an MTV cribs for planes, ugh, what a dream!”