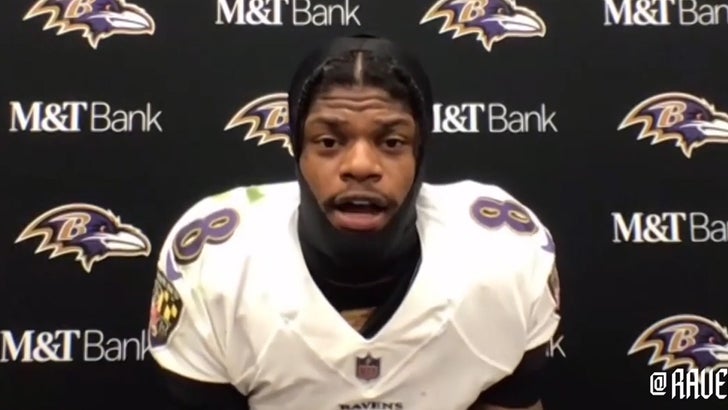 Lamar Jackson insists he was CRAMPING — not CRAPPING — and that’s why he raced to the locker room in the middle of “Monday Night Football.”

In other words, Lamar says he didn’t “pull a Paul Pierce” and fake an injury so he could take a dump!

Here’s the deal … Lamar was leading his Baltimore Ravens in a close and heated game against the Cleveland Browns (ha) when something went wrong with the QB in the 3rd quarter.

ESPN showed footage of Lamar scrambling to get to the locker room — and to be honest, it looked like a guy trying to keep the turtle’s head from poking out … if you catch our drift.

When Jackson returned to the field, he looked relieved — and balled the hell out for the rest of the game!

So, everyone thought the poop theory was confirmed — he left, he crapped, he came back feeling better and dominated … right?

Lamar was asked about the toilet conspiracy after the game — but adamantly DENIED the locker room trip was bowel-related!!

Remember, Pierce left Game 1 of the 2008 NBA Finals in a wheelchair due to an apparent injury — only to return to the court minutes later and led the Celtics to victory.

Years later, Pierce admitted he needed the wheelchair to keep from pooping himself on live TV.

But, Lamar insists he’s no Paul Pierce — and followed up with a tweet to reinforce his point.

As for the Ravens, they beat the Browns thanks to some excellent 4th quarter play by Lamar Jackson.

Now, it’s on to the NY Giants next week — someone keep some Tums ready just in case!