‘I’m bisexual… I would never disrespect anyone like that’: Lee Ryan denies claims he is transphobic or homophobic after foul-mouthed attack on a drag queen over gender identity

Lee Ryan has furiously denied claims he is transphobic or homophobic after he became embroiled in a vicious spat with a drag queen on Instagram last week.

The Blue singer, 38, was sarcastically commenting on gender identity, posting to his 172,000 followers: ‘I might start identifying myself as an alien / star / seed / indigo child. Anything but human. Please respect my wishes.’ 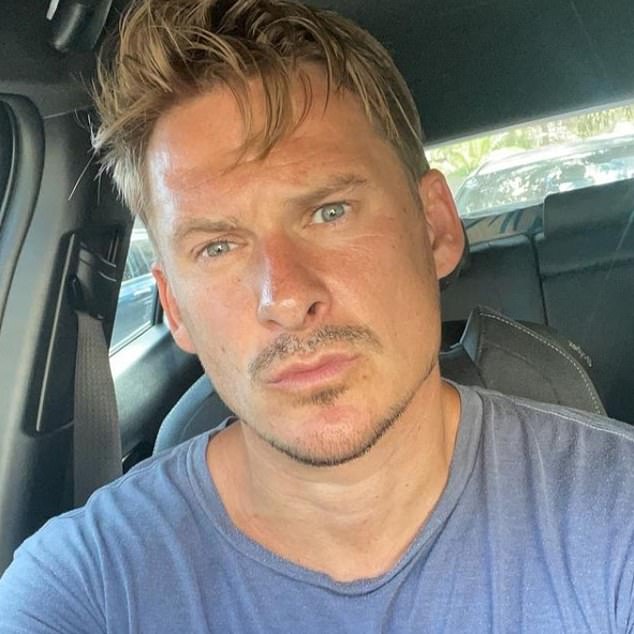 Acid-tongued rant: Lee Ryan has been forced to deny he is transphobic and homophobic became embroiled in a vicious spat with a drag queen on Instagram last week, calling her a ‘c**t’ and threatening violence on her

Discussing the fall out with The Sun, Lee said: ‘I’m bisexual and my bandmate is gay – I would never disrespect anyone like that.

‘I normally ignore things like that but it’s like somebody calling me racist when I’m not. Duncan’s constantly dressing in drag, he’s gay, Blue has a big [gay] following – so this really upset me.

‘Some of my best friends are gay. I didn’t say one thing about him being in drag.’

Lee’s venomous attack came after the drag queen said: ‘Do you think this is a bit insensitive to your fans that do choose to identify as something outside of the gender binary? 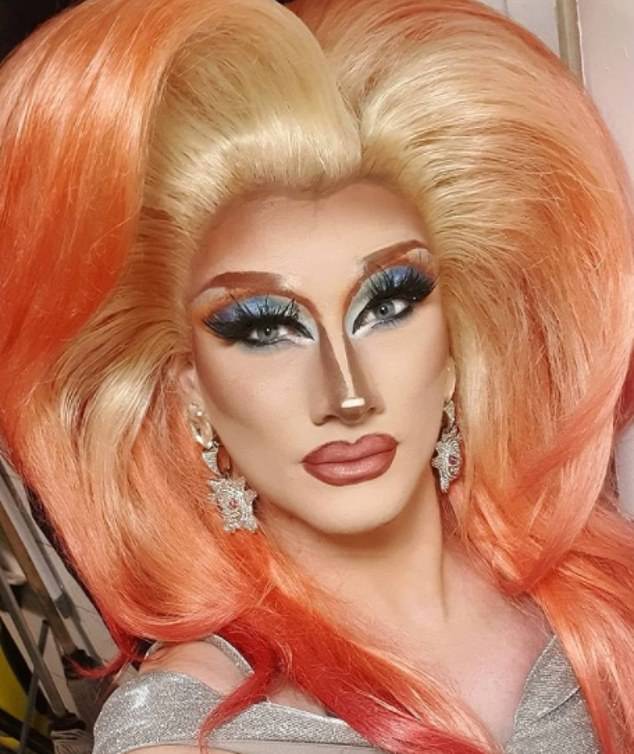 Hitting back: Drag queen Layla Zee Susan – real name Sammy Shepherd – was told by Lee to go and ‘f**k your dad with a pineapple and let your mum watch’. He also threatened to slap and headbutt her

‘This kind of mocking is really nasty and you’re being a bit of a d**k!’

Lalya posted a grab of their DM and added: ‘Lee Ryan has posted an insensitive story and I decided to call him out on it!’

But former-EastEnders actor Lee replied: ‘F**k off c**t. Does that offend you?’

Layla asked: ‘Have you been hacked perhaps? What a shame.’

Posting the grabs on her Instagram stories she said: ‘This is the response I got.’

But pop star Lee – who had chart success with boyband Blue in the nineties and noughties – fumed: ‘No, I just can’t stand little opinion c**t like you who think your opinion matters to me 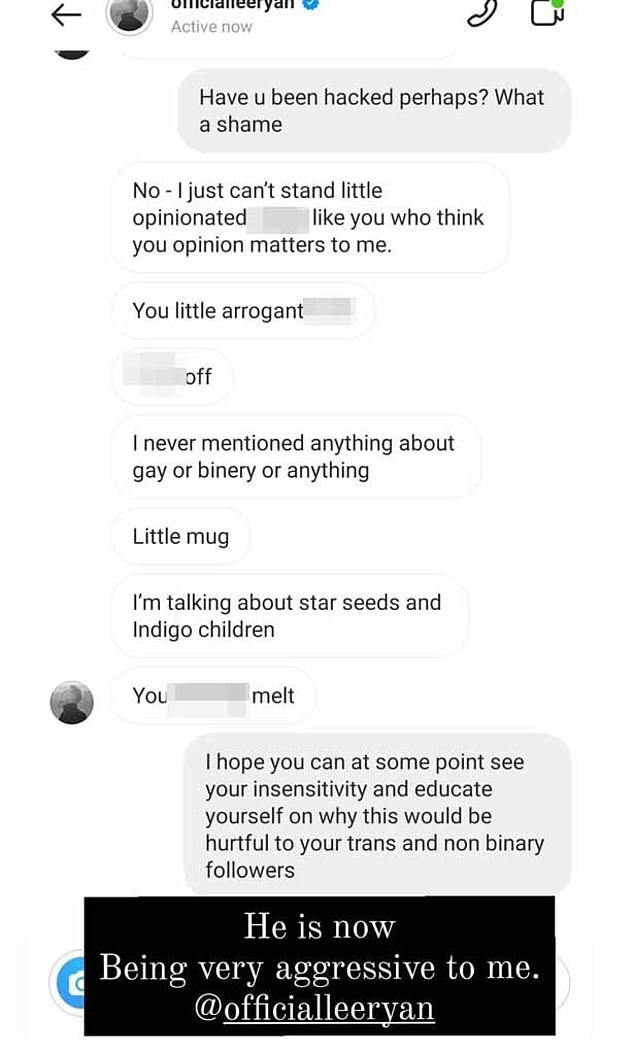 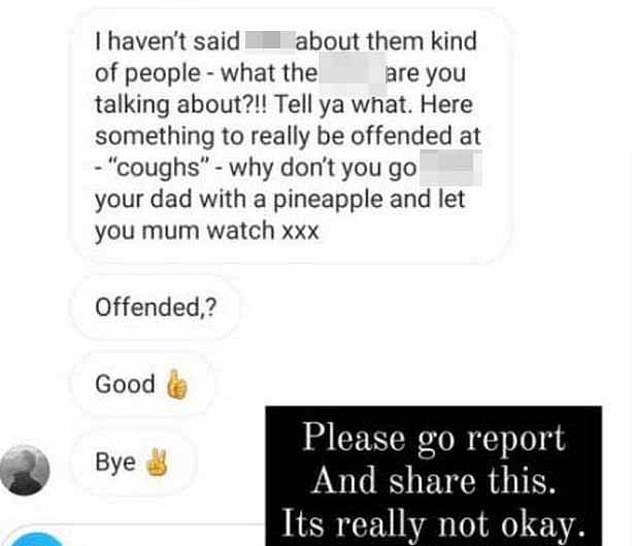 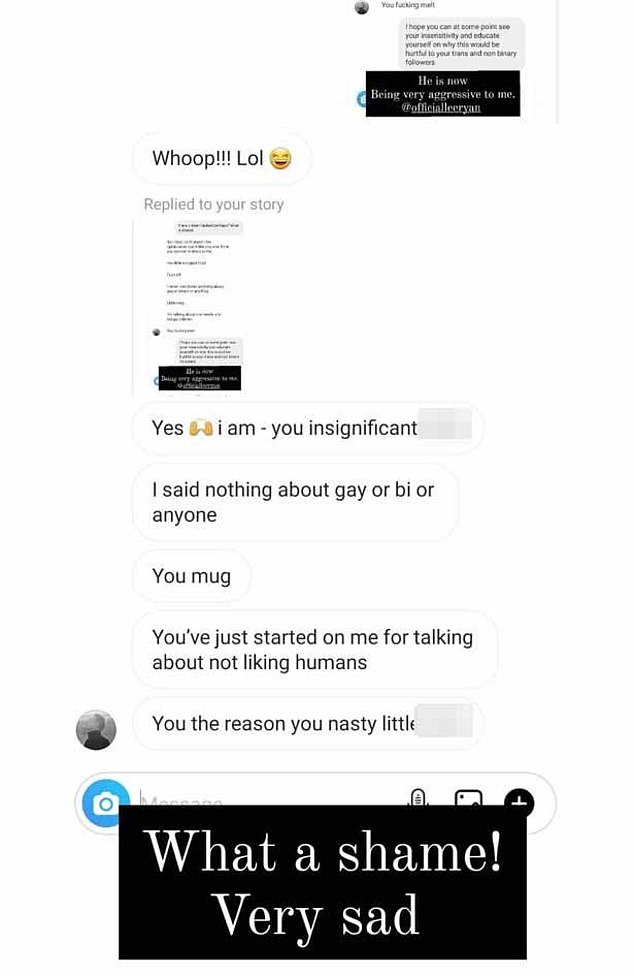 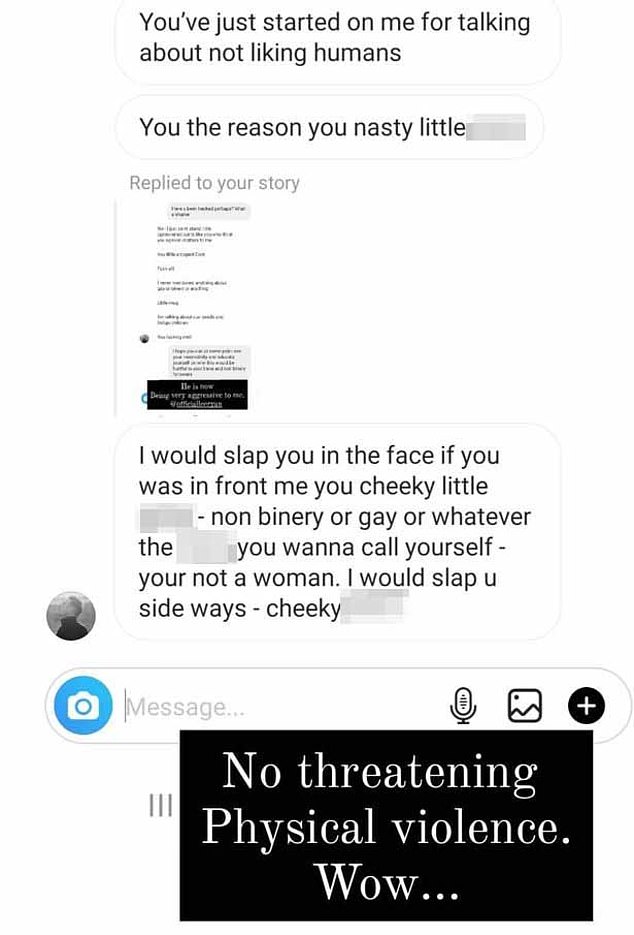 Lalya posted a grab of their DM and added: ‘Lee Ryan has posted an insensitive story and I decided to call him out on it!’

‘You little arrogant c**t. ‘F**k off. ‘I never mentioned anything about gay or binary or anything. ‘Little mug.

Layla responded: ‘I hope you can at some point see your insensitivity and educate yourself on why this would be hurtful to your trans and non binary followers.’

Lee added: ‘I haven’t said s**t about them kind of people. What the f**k are you talking about? 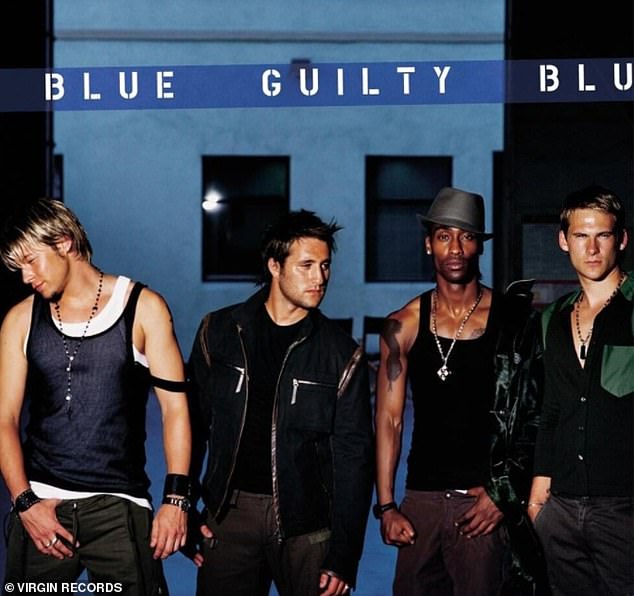 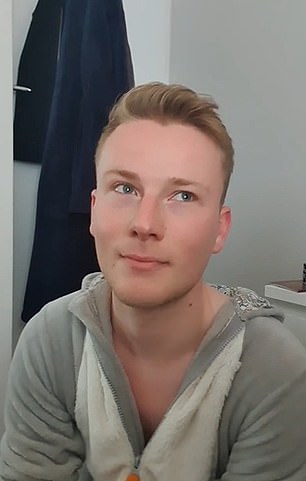 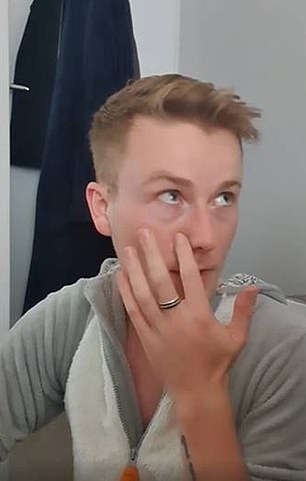 Tell-all: Out of drag, Sammy posted a lengthy account of the drama in an Instagram video for his close-to 4,000 followers

‘Tell ya what here something to be really offended at why don’t you f**k your dad with a pineapple and let your mum watch. Offended? Good. Bye.’

Layla said: ‘He is now being so aggressive to me.’

Lee went on: ‘Yes I am you insignificant c**t. I said nothing about gay or bi or anyone. You mug.

‘You’ve started on me for talking about not liked humans. You’re the reason you nasty little c**t. What a shame, very sad. 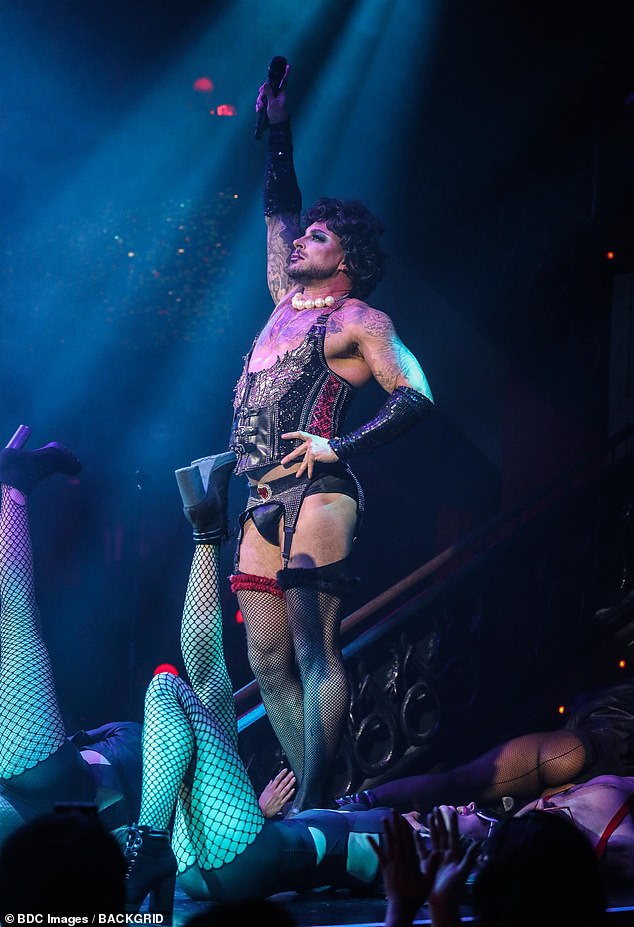 Have a word? Layla then called on his former Blue bandmate Duncan James, 43 – who came out as bisexual in 2009 and gay three years later, and acts as a drag act sometimes [pictured] – to talk some sense into Lee

‘I would slap you in the face if you was in front of me you cheeky little p***k. Non binary or gay whatever the f**k you wanna call yourself. You’re not a woman. I would slap you sideways, cheeky c**t.’

He added: ‘I never said s**t about anyone but myself and the way I benefit myself your a hypocrite. If you were in front of me I would honestly head butt you.

‘But you wouldn’t say s**t to my face because you’re a keyboard troll. I never said s**t about non binary or gay. I said I don’t like being a human mostly because of little f*****s like you who shove your opinion down people’s throats and think you’re entitled. 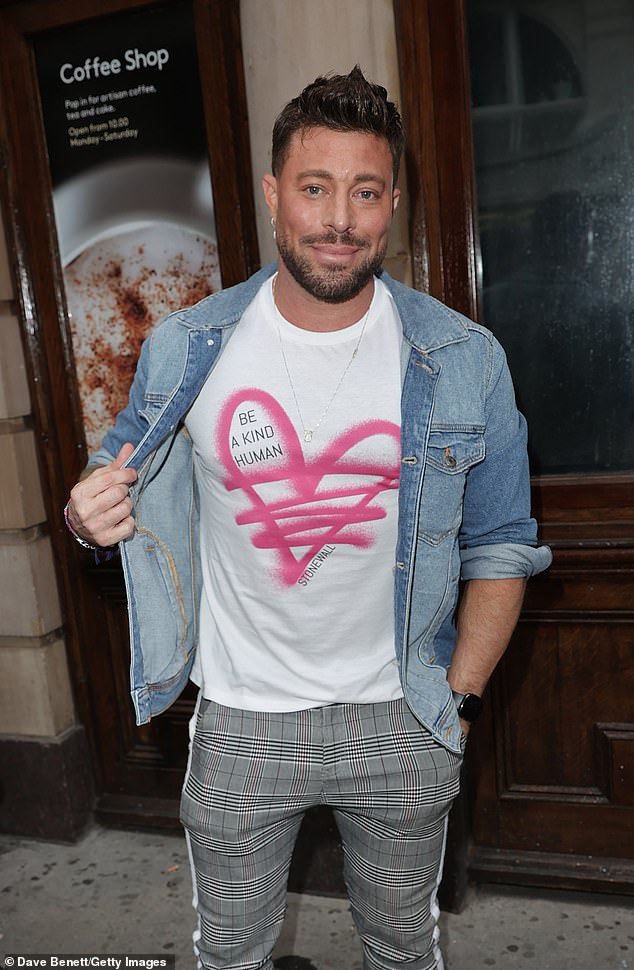 Layla then called on his former Blue bandmate Duncan James, 43 – who came out as bisexual in 2009 and gay three years later, and acts as a drag act sometimes – to talk some sense into Lee.

The Sun claims Sammy has since reached out to Lee and apologised.

Out of drag, Sammy posted a lengthy account of the drama in an Instagram video for his close-to 4,000 followers.

Alongside this, he penned: ‘Lee Ryan told me to f**k my dad with a pineapple! Hey everyone. What a day! I wasn’t really sure what I was going to say in this video but I just wanted to conclude the madness that happened today and thank you all for your support. 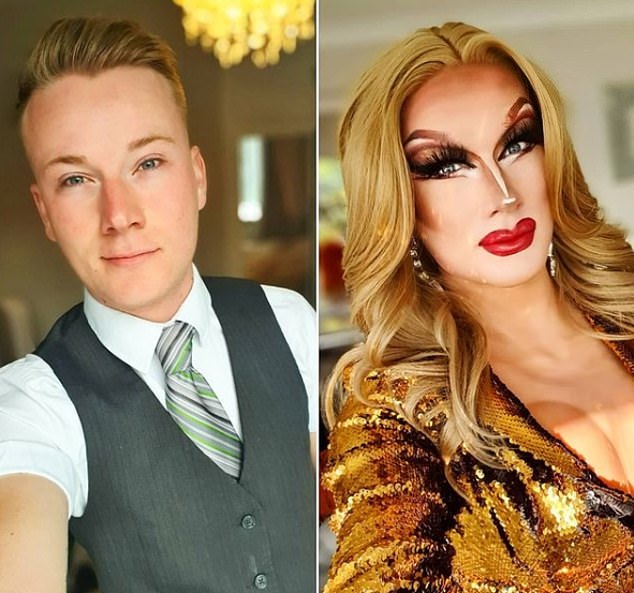 The drag queen said: ‘Do you think this is a bit insensitive to your fans that do choose to identify as something outside of the gender binary?’

‘If anyone who identifies as Trans, Non Binary or anything else on the gender spectrum feels like I still need some educating on this then I am ready to listen but I do hope that I was an ally today as that is what i was trying to do.’

At the end of his video, Sammy branded Lee ‘troubled’, ‘angry’ and suggested he was ‘hiding something’.

In May, Lee hit back at trolls who criticised him for gaining weight while in lockdown during an emotive Instagram video.

He had been enjoying a rooftop singing session with his mother and girlfriend Verity at his home, showing his vocal abilities to Spandau Ballet’s Gold.

But the singer was forced to go inside and take a moment after trolls started sending him abusive messages about his appearance. 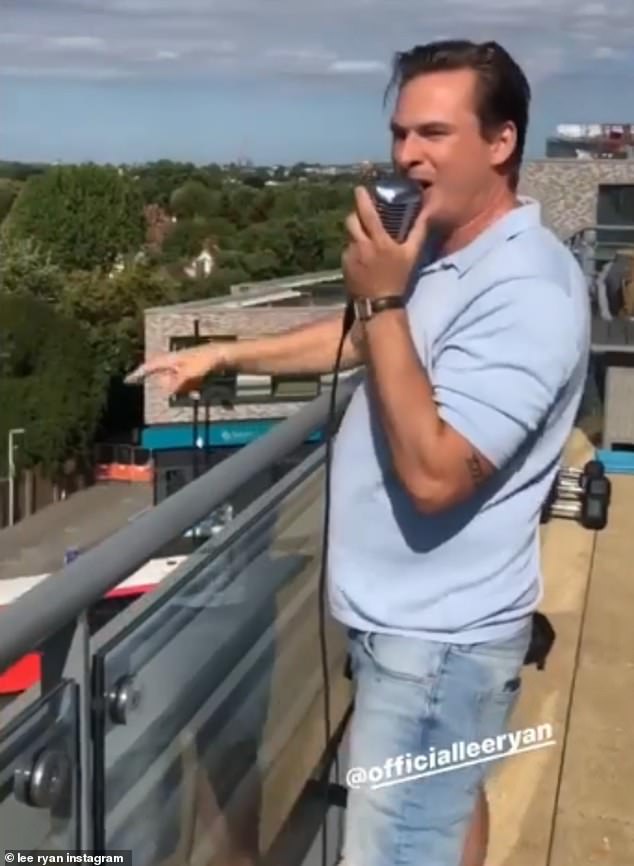 ‘Yeah, I’ve put on weight, who hasn’t?’ Lee urged trolls to ‘be kind’ after he was criticised for his appearance during a fun family karaoke session on Instagram in May 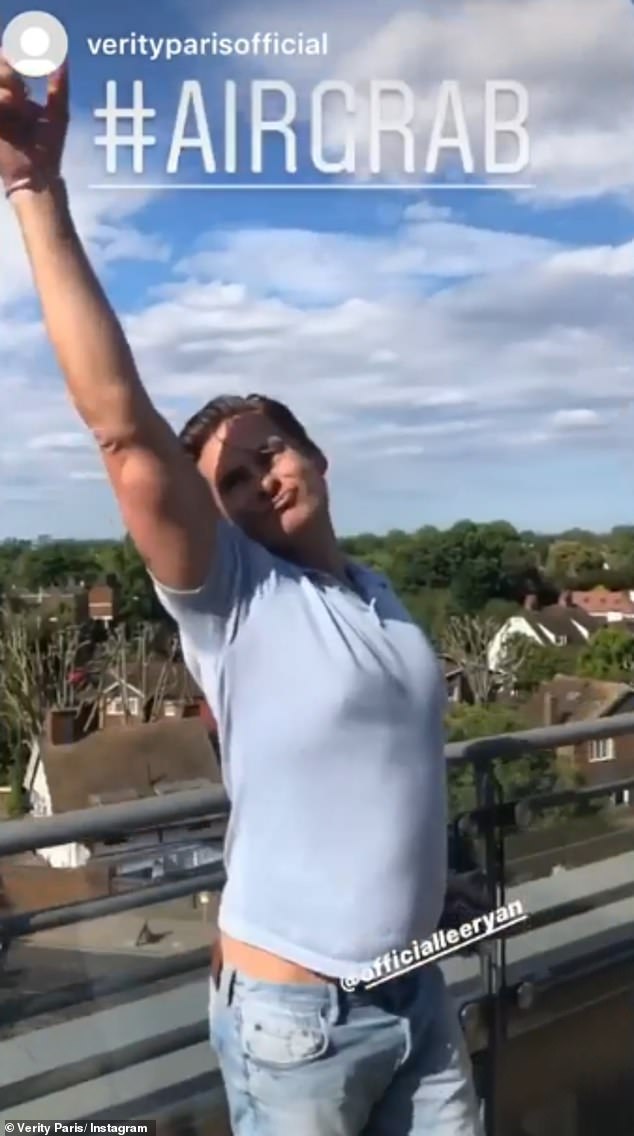 Not on: The singer had been showing off his incredible vocal skills while on the rooftop of his house with his girlfriend Verity Paris and his mother

Talking to the camera, he said: ‘So listen right, a few people are on at me for having fun and saying, “Oh s***, you look like you’ve put on a bit of timber”.

‘Who ain’t in this lockdown? No one is going out and doing their usual routine. Be kind to people, we will all lose it eventually.

‘Be happy, be with your family and be kind and loving to people. Especially during this time…’

He continued: ‘And yes, I have put on a bit of timber and that’s OK. Be with your loved ones, your families, enjoy your time and be kind to one another.’ 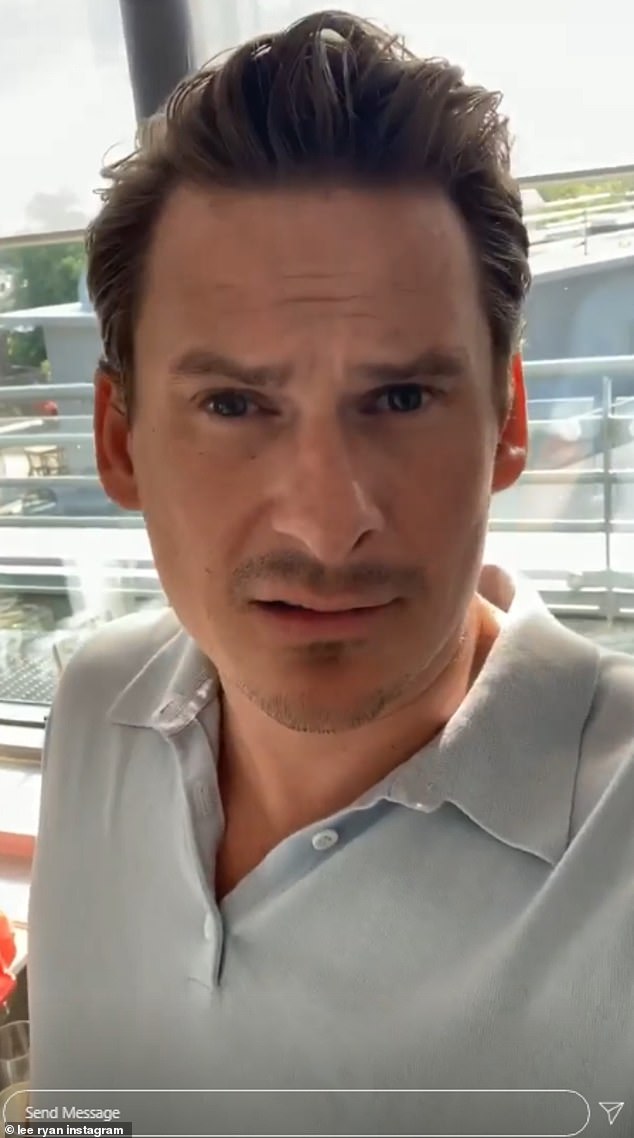 Truth: After reading some of the nasty messages Lee said a lot of people have put weight on in lockdown and the important thing is to be happy and be kind right now