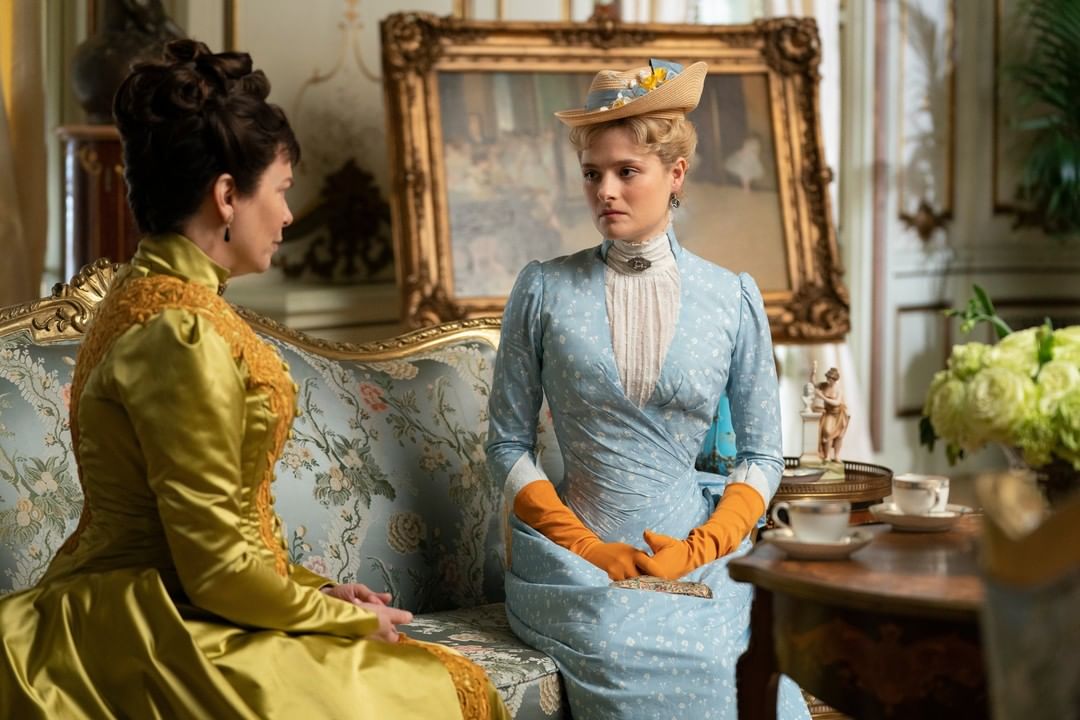 I’ve entered The Gilded Age hive. I wasn’t watching the series at first, but I started watching a marathon one weekend and I became obsessed with it. It is a worthy successor to Downton Abbey: a gorgeous and cheesy soap opera. Much like Downton, the Gilded Age wants to be high-minded and a prestige drama, but it is in essence a cheesy soap opera. And that’s fine! Not everything has to be a high-minded drama. Sometimes the most dramatic things happen when a sheltered young woman makes bad decisions, or when a scandalous woman has a great art collection, or when you run into your neighbor’s employee at a shop.

Anyway, there are three characters who get the BEST clothes: Louisa Jacobson’s Marion, Carrie Coon’s Bertha Russell and Denee Benton’s Peggy Scott. Louisa is arguably “the lead,” and she wears some of the most “modern” looks of the period. But even though those looks are modern for the time period, she still has to wear all of the corsetry. She’s already slim, but they make her waist look TINY on the show. Well, Louisa gave an interview to Reign with Josh Smith, and she had a lot to say about the corsets in particular.

Getting used to wearing corsets: “It took a long time to get used to that corset after wearing sweatpants for so long… Every day when I took it off, I was so grateful and I will never take for granted being a female-identifying person in 2022, who does have the freedom to put on a pair of pants that are kind of loose and call it a day. The things women had to do — the corset was crazy.”

Beauty standards: She says wearing a corset made her realize “how I’ve internalized beauty standards so intensely. You’ve seen Cinderella, you’ve seen any Disney movie. Have you seen Frozen? Their waists are like the size of my finger. All the main princess characters just have these tiny little waists and you grow up seeing that. I walked on set and I was like, in my fittings too, I was like, ‘Just tighten it. I wanna look snatched.’ ”

She regretted getting the tight corsets though: “I really suffered from that decision because they measured and sewed all my costumes based on how tight my corset was in the fitting when I had been really ambitious about making it very tight,” she told Smith. Eventually, Jacobson chose to alter her dresses so she could be more comfortable. She explained that about three or four months into filming, she asked the costume designers to take out her dresses in the waist “because it was just too much.”

She couldn’t sleep on her side because of the corset-wearing: “It was taxing physically and mentally, I couldn’t sleep on my side for a long time because my ribs were so sore. That’s when I realized I really need to loosen this up. After every take or between setups, I would ask my dresser to untie the corset so that I could get a break. They were called corset breaks.”

She would end up wearing the corset for 15 hours a day: “To have that [the corset] on for that long is bananas and the women back then actually in the Gilded age, they would change their clothes three or four times a day, and someone on set assumed that was because they needed breaks from wearing these corsets, and they wore them tighter than we do.”

Honestly though, her whole “look” on the show is spectacular. I realize it’s come at a steep price and months of discomfort, but that’s why you don’t tell the costume people “I wanna look snatched, make it tighter!” I’ve worn a corset before and it’s no f–king joke. Real corsets – like the ones with boning – are f–king brutal to wear. You spend five minutes in one of those and you mostly want to die. Your internal organs are squished and I’m sure women did very serious damage to their organs that way. All that being said, Louisa does look f–king snatched! I love seeing Marion’s clothes because – I’m guessing – they had so much fun designing the stuff in a particular way for her body. She’s small-chested and kind of narrow, so those 1880s costumes look like they’re on a mannequin.

PS… I couldn’t find photos of this, but the Peggy Scott character wore my favorite look of the show in a recent episode. It was a plaid fabric with some sheen which looked AMAZING with the bustle. 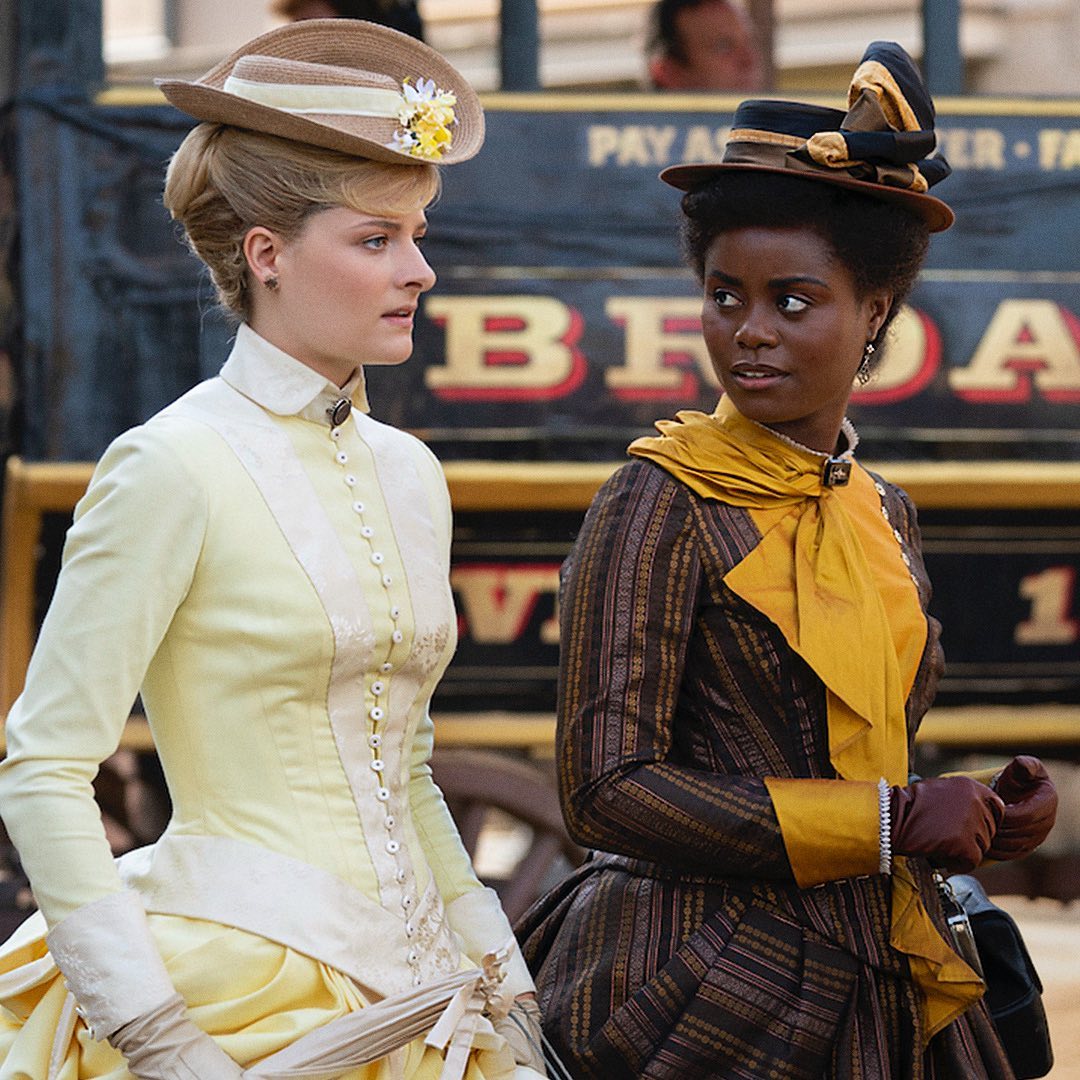 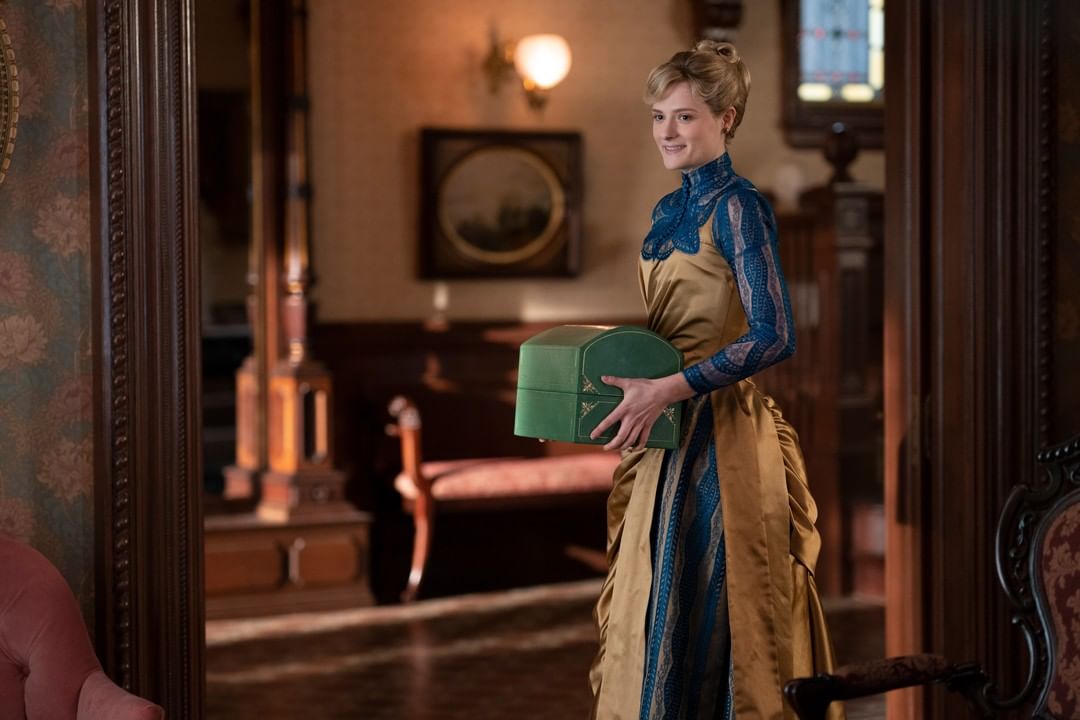 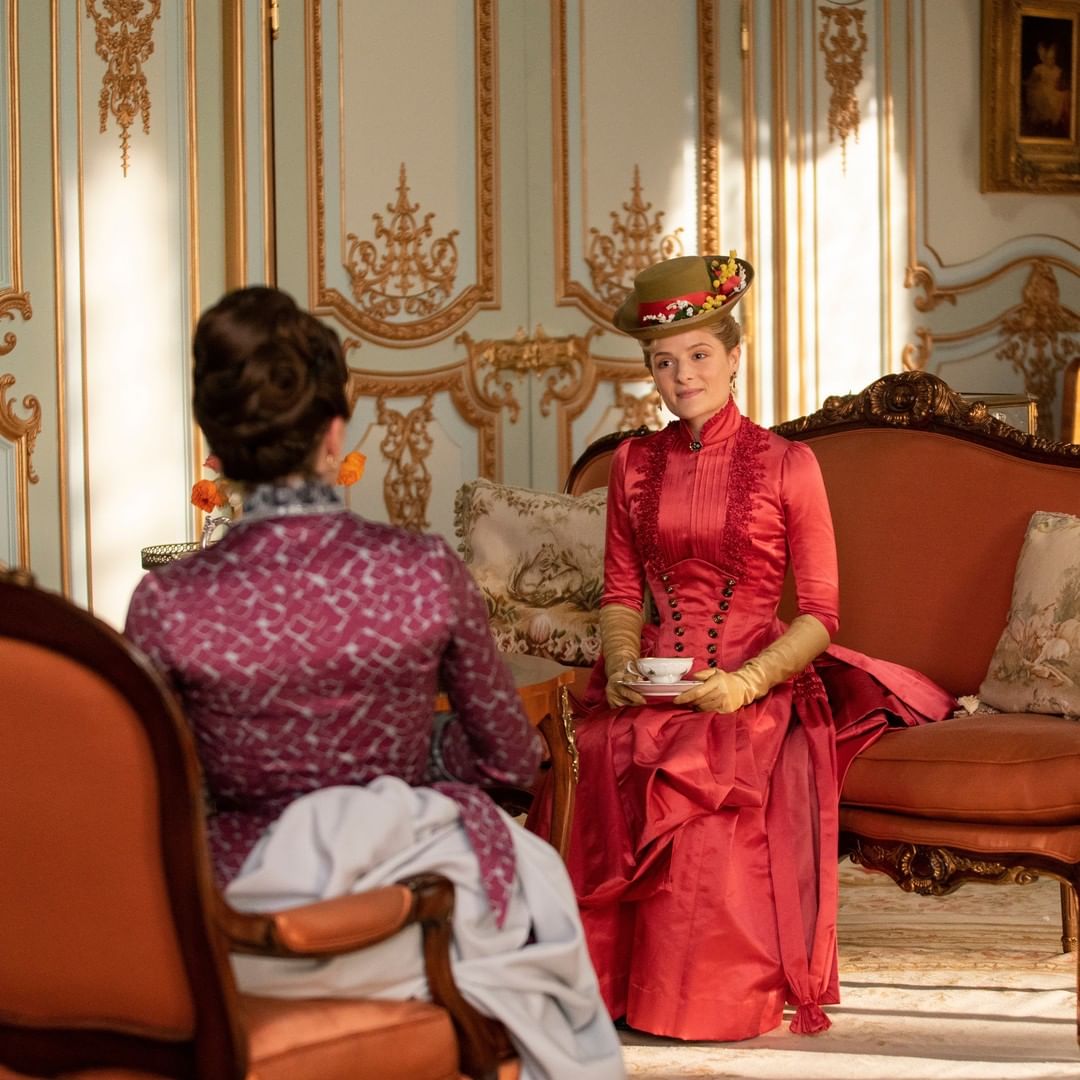