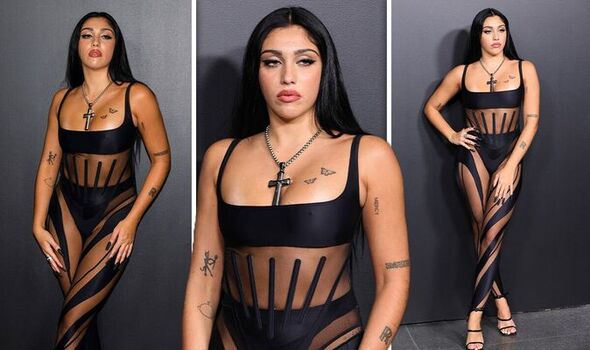 Madonna’s daughter Lourdes Leon stole the show last night as she made an appearance at an exhibition opening in a sheer bodysuit, leaving very little to the imagination.

Lourdes Leon, 26, showcased her phenomenal figure last night as she posed in a sheer black bodysuit, leaving very little to the imagination.

Madonna’s daughter showed up in the eye-catching outfit at the opening of the Mugler Couturissimo Exhibition at the Brooklyn Museum on Tuesday evening.

She wore the eye-popping ensemble in tribute to the late designer Thierry Mugler, who died in January this year.

Lourdes’ look highlighted her assets and small tattoos with the bodysuit’s low-cut neckline.

She accessorised with a chunky cross-silver necklace and silver rings while adding height with a pair of strappy black heels.

Lourdes Leon looked the vision of beauty in the sheer black revealing bodysuit, showing off her phenomenal figure. She wore the eye-popping outfit in tribute to the late designer Thierry Mugler, who died in January of this year.

Lourdes Leon’s bodysuit featured opaque black stripes, going up her stomach, and covered her modesty with a high-cut black thong. Her legs were decorated with swirling black stripes, falling effortlessly to her strappy black heels.

Lourdes Leon showed off her sense of style

Lourdes Leon wore the busty bodysuit to the opening of the Mugler Couturissimo Exhibition at the Brooklyn Museum on Tuesday evening. She also had a matching black leather jacket that she wore draped down around her arms, though she removed it while posing on the red carpet.

Lourdes Leon modelled for Mugler in June when she wore a beige striped leotard, a very similar design to last night’s outfit, with the ensemble channelling some of her mother Madonna’s iconic stage looks from the 1990s.

Lourdes Leon was joined on the red carpet by her friend Patia Borja, also a model, who put on a busty display in a black sleeveless crop top, and white and black striped pants.

Madonna had Lourdes in October 1996 from her relationship with Carlos Leon. Lourdes was born at the Good Samaritan Hospital in Los Angeles. Madonna admitted that becoming a mum inspired her to join the Kabbalah faith, which she is still a part of to this day, as are all her children. Her relationship with Lourde’s father ended in 1998, with Madonna then pursuing her acting career, before meeting Guy Ritchie in 1999.