After being hit with reports that things might have gone south between him and his ex post-split, the season 25 star of ‘The Bachelor’ is seen grabbing a drink with her in Santa Monica, Los Angeles.

AceShowbiz –Matt James has been spotted hanging out with Rachael Kirkconnell. Although being reported to have not been on a speaking term with one another, the season 25 star of “The Bachelor” and his ex sparked reunion rumors with their Los Angeles outing.

On Saturday, April 24, the 29-year-old was seen enjoying his weekend with his ex at JuneShine in Santa Monica, Los Angeles. In the photos obtained by TMZ, he was seen wearing a dark blue hoodie and blue floral shorts. His ex, on the other hand, put on an oversized black jacket, and has sunglasses on top of her head. Though they didn’t share any PDA, they were captured leaving together.

Reality Steve additionally shared via Twitter a photo of the two spending time together in Los Angeles. In the April 24 snap, it can be seen Matt and Rachel were sitting at a Newport Beach restaurant together. About the sighting, Steve wrote, “Rachael has been with Matt all week In CA. This is from earlier today at lunch at Bear Flag Fish Co in Newport Beach.” 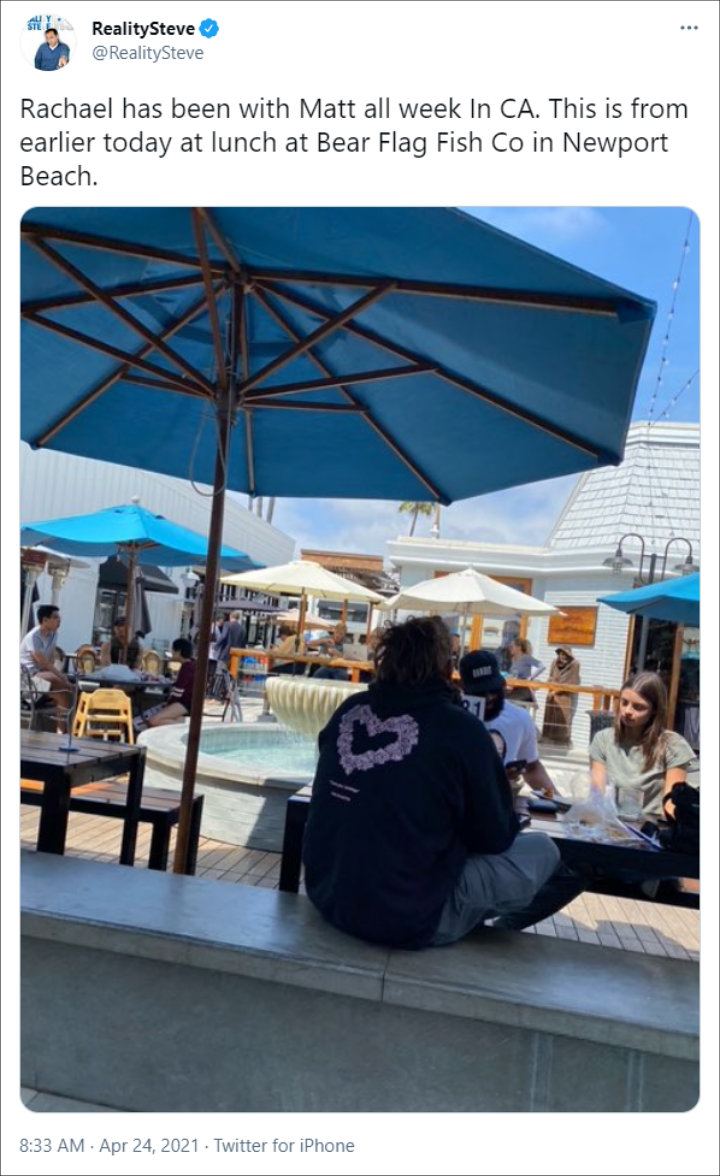 Reality Steve shared a photo of Matt James and Rachael Kirkconnell together in LA.

This is the first time Matt was seen hanging out with Rachael after rumors came out that they were not on speaking terms. After the North Carolina native visited the graphic designer in New York City earlier this month, he was reported to have been speaking to another woman called Grace, drawing ire from Rachael.

“Rachael is very emotional right now because she was very hopeful that things were going to work out,” another source spilled. “She’s still trying to process this.” When Matt came to see her, Rachael was said to be hopeful over their reunion. However, she found out about Grace, and was reportedly admitted that she felt “manipulated” by him.

A source close to Matt, however, stressed that the reality star didn’t have plan to be getting back together with Rachael. The insider said that he “tried to make it clear to her that he just wants to be friends,” adding, “Matt is a caring and supportive person, so he wouldn’t want to block her out of his life completely.”