Ah, man! Kim Kardashian revealed she flunked the “baby bar” exam for a second time on the June 10 finale of “Keeping Up With the Kardashians.” For those who don’t know, the “baby bar,” which is formally known as the First-Year Law Students’ Exam, is a test for California law students who are in the first year of study, per Page Six. However, these students opted to learn with a private tutor as opposed to a typical university classroom.

The students who take the exam, like Kardashian, need to earn a score of 560, or 70 percent, in order to receive full law school credit for the courses they have taken thus far, according to JD Advising. But, if someone fails the exam three times but passes on their fourth attempt, they will only receive credit for their first year of study.

The reality star revealed she failed at her first attempt at the seven-hour-long exam during a May episode of “KUWTK,” admitting she scored only 474 points. Although she didn’t share how she performed the second time around, she said her score was “pretty much the same thing … [but] a little bit worse” than her first try on the show’s latest and final taping. Keep scrolling for more details about how the businesswoman is dealing with her struggles to become a lawyer.

Kim Kardashian isn't giving up on becoming a lawyer just yet 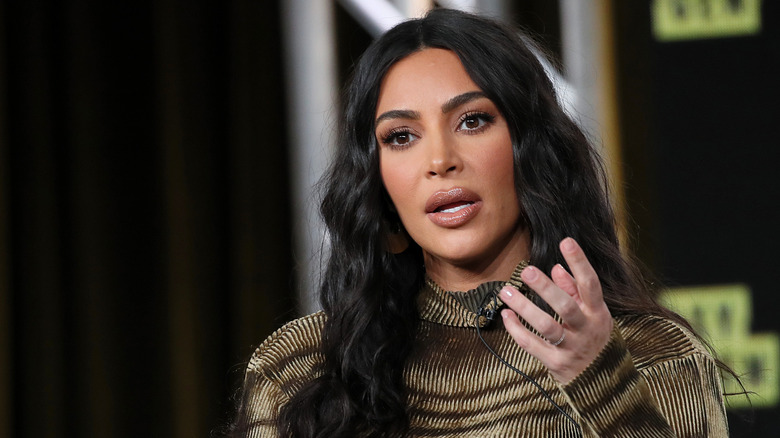 After months of studying and preparation, it’s no surprise Kim Kardashian was disappointed to learn she failed the “baby bar” for the second time. “I failed! F**k! I failed,” she told her lawyer pals on the phone during the June 10 episode of “Keeping Up With the Kardashians,” per Page Six, adding, “This is really annoying.”

She continued to share her feelings during a confessional interview, telling cameras, “I feel bummed. Like totally bummed, but it is what it is.” However, she said she’s still going to keep pushing towards her goal. “I know I just have to not stress about it,” she explained. “There’s so many other f**king stressful things going on. I just have to do better in the future.”

During a phone call with her sister Khloé Kardashian, the Good American founder reminded the law student of all the hurdles she’s dealt with in addition to studying, including battling COVID-19 prior to the exam, the ending of their show, and her marital problems with Kanye West.

Although Kardashian felt like she “didn’t come through” for those who supported her, it looks like her sister’s encouragement helped put things into perspective. After their chat, she vowed to give the test another go in July. Hopefully, the third time’s the charm for this hopeful student!