CBS’s show "NCIS: New Orleans" was accused Sunday of parroting the mainstream media by "doubling down on false liberal propaganda" to paint sometimes violent protests across the nation as "peaceful" demonstrations.

Some members of the media bent over backward in 2020 label demonstrations as "peaceful" regardless of the evidence and Media Research Center contributing writer Lindsay Kornick feels the hit CBS drama took a page from the press' playbook.

"The latest episode somehow went further to appease a ‘burn the establishment’ progressive and her mostly ‘peaceful’ crowd," Kornick wrote. "The January 3 episode "Operation Drano, Part 1" has NCIS Agent Pride (Scott Bakula) taking part in a commission put forth by the mayor to solve the issues plaguing the city. Sadly, that does not include the actual issues in New Orleans like high crime or taxes but rather the vague progressive issues of ‘systemic inequality.’ In fact, Pride himself claims the city ‘was born’ of systemic inequality. This leads to a heated argument between former police superintendent Michael Holland (Gareth Williams) and progressive voice Allie Briggs (Hannah Hodson)." 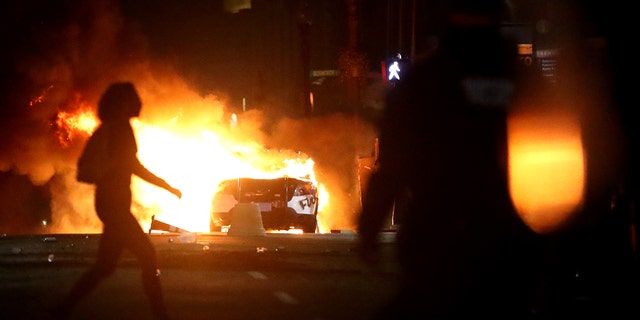 The media bent over backwards in 2020 label demonstrations as "peaceful" regardless of the evidence. (Photo by Maddie Meyer/Getty Images)

Kornick said the dialogue mirrors Democratic talking points and much of the mainstream media, as Briggs urges leaders to "burn down" the establishment while criticizing police.

"Of course, the one person who doesn’t think the police are racist is seen as the unreasonable one," Kornick wrote. "This leads to Pride trying to get Holland to reconsider his mindset on viewing the city as inherently racist. He even goes so far as to peddle the usual lie that the ‘vast majority’ of [Black Lives Matter] BLM protestors are just peaceful idealists being dragged by a few bad actors. Strange how the police never get that benefit of the doubt."

In May, MSNBC anchor Ali Velshi, who was reporting live from Minneapolis following the death of George Floyd, told viewers that the situation was "not generally speaking unruly," while he was standing in front of a burning building.

ABC News was mocked in July for describing a California protest that featured demonstrators setting fire to a courthouse, vandalizing a police station, and shooting fireworks at police officers, as "peaceful."

"CBS Evening News" anchor Norah O’Donnell even said "mostly peaceful" protests would cost $1 to $2 billion in claims as a result of damage from looting and arson and CNN national correspondent Omar Jimenez reported live in August on the unrest that had taken place in Kenosha, Wis., following the police-involved shooting of Jacob Blake. At one point, the CNN reporter stood in front of a raging fire and the chyron at the bottom of the screen read, "FIERY BUT MOSTLY PEACEFUL PROTESTS AFTER POLICE SHOOTING."

As for "NCIS: New Orleans," the pro-cop character eventually "relents to the BLM message and even agrees to work with the commission to try to reform the cash bail system," according to Kornick.